I haven’t played with High Temp resin yet. I have an application which might benefit from it - it’s a prototype bracket for a headlamp, which needs to withstand very high ambient heat. Thing is, one side of the lamp has to snap-fit into the bracket. It works like a champ in Tough, but I understand High Temp is one of the most brittle resins in the lineup.

Subjectively speaking, do you get any give with the stuff?
Does the trick of heating with a heat gun to help ease in snap fits work at all?

Appreciate any feedback from people who’ve had their hands on the stuff. Happy to share a model and pay for resin if someone is willing to run me a sample part.

In case details help me get a better answer to my question… the hole diameter where the “lamp axle” will snap into is about 9.6mm, wall thickness of the flange is 3.1mm, and presently I’m using an opening about 6mm large. So right now I’m subjecting each “prong” to around 1.6mm of deformation during insertion. Easy to reduce that for a more rigid material, as long as it won’t fall out! 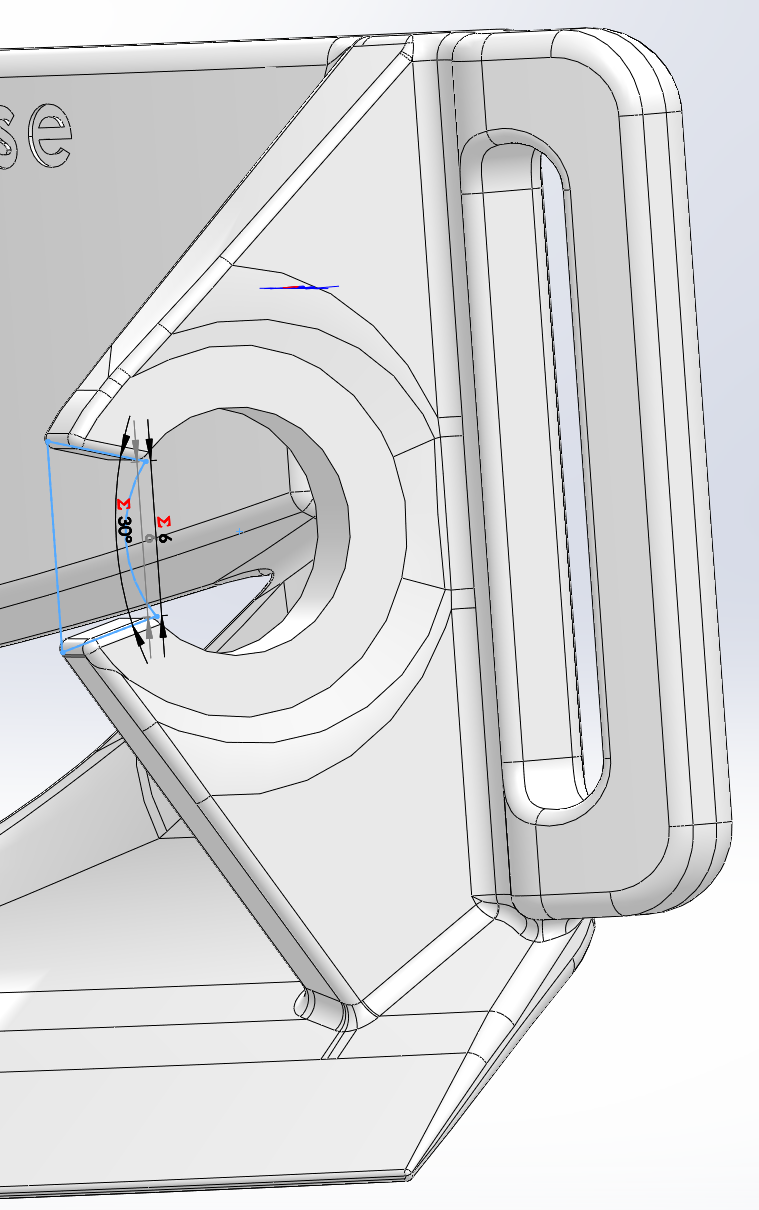 My feeling is that you’ll need to reduce the deformation to a minimum otherwise the resin will break, in any case HT isn’t really suitable to snap-fits. I do not have any insight on how HT resin behaves under high temperature though.
What kind of temperature are you talking about ? Is you part subjected to static/dynamic loads after assembly ? In a headlamp temps should not be higher than 60°C, and if you parts isn’t stressed much a well cured Tough part might work.

High temp resin hardly deforms. It will most likely break.

Thanks guys I appreciate the feedback. Yes there’s a small static load (straps tie onto both ends of the bracket and pull it outwards along the “longitudinal” axis. But the stress there isn’t high so I’m not too worried about that. Might be impacts and bumps from day to day use.

Sounds like it might not be worth playing with High Temp for this part. I’m going out on a limb here but I don’t suppose anyone’s tried a bit of resin alchemy to mix Tough and High Temp?

You could always design the part in two parts… Most of it in tough resin, and a shield part the isolate the tough resin from the heat source.

What is the definition of “very high ambient heat”? Standard automotive specs?

We have tested standard clear resin between -40 and 140 Celsius and works like a charm for a few cycles of 30 minutes. We have heat curing glue and put this material in the oven at 100C+ as well for an hour. If you push the limits it will get a bit soft/deforms but for just a few form fitting tests it’s OK.

The tough resin can’t handle any heat. It softens really quick and deforms(just leaving it in the hot sun is a problem already).

I have good hope that rigid resin will perform even better than the clear resin in terms of geometric stability and am going to test this out at well in the coming weeks.

Is there a reason you aren’t using a metal fastener as a pin between the two parts?

I got Tough resin up to 60°C with a hairdryer and it does soften significantly. The part still works but I expect as the temperature goes higher it will deform too easily. Ideally I’d like to maintain some rigidity above 200°C.

I did wind up ordering High Temp after all to try out. I beefed up the thicknesses in preparation, and will do a test in Standard in the meantime.

@fantasy2 Let me know how your heat testing with Rigid goes, and if it withstands impacts better than High Temp (i.e. less brittle). I’m waiting for some that’s been on backorder. Although expect it would be worse for snap fits even than High Temp?

I’d love to use a fastener such as a pin but thought it would complicate my design too much. Also note the “bearing” on that side would no longer be circular and the “axle” of the lamp would rub against the pin at a pressure point (which might be ok). @adriantanner do you know of any small fastener parts you can recommend which might work for this?

@Sculptingman thanks for the shield suggestion but the heat is fairly ambient.

@rkagerer If you send a picture of what the design looks like now I may be able to recommend a specific part. Was thinking of something along the lines of a screw into captive nut.

What about using a set screw M1.6 and at the bottom of the set screw you put a small (printed plastic) cylinder which puts force on the axle? If you had a little bit more space for a bigger screw you could even use a spring to compensate for temperature variation and have a stable clamp force.

Or maybe you could print the piece in two and use some resin to glue it together after assembly?

It’s been several weeks and I thought I’d loop back with an update on my efforts. I ordered the High Temp and have been printing an army of iterative test parts in High Temp and Standard Black. As expected, High Temp is much more brittle. However, that doesn’t rule out the ability to do snap fit - if you’re careful.

e.g. In Standard Black, I settled on a 9.65mm hole diameter (which gives the desired amount of friction when the lamp is rotated) and 8.5mm opening height. Insertion and removal through that 8.5mm opening takes a fair bit of force (which was a design goal), but you can do it by hand and without the need to heat the joint. To make this work in High Temp, I had to increase the hole size to 9.8mm 9.75mm (otherwise the lamp “axle” squeaks and intermittently jams on rotation) and the opening height to 8.75mm 8.8mm.

That 0.25mm 0.3mm increase in opening height going from Standard to High Temp seems to work great. Go much smaller and the HT part cracks on lamp insertion.

I did find you can still use the hairdryer / heat gun trick with High Temp to soften joints slightly just prior to snap fit, making them a tad more forgiving.

I’m still doing ongoing testing to dial in exactly what values I want to settle on for the final part.

EDIT: I updated this post with further-tweaked values, which seem to be working well.
Note the “axle” inserted into the bracket is around 9.45mm to 9.55mm in diameter (it’s a plastic part, and not perfectly round).

@rkagerer - Could you post a picture of what you have so far? I’m curious to see it.

@Chris_Estelow Sure, ask and you shall recieve: 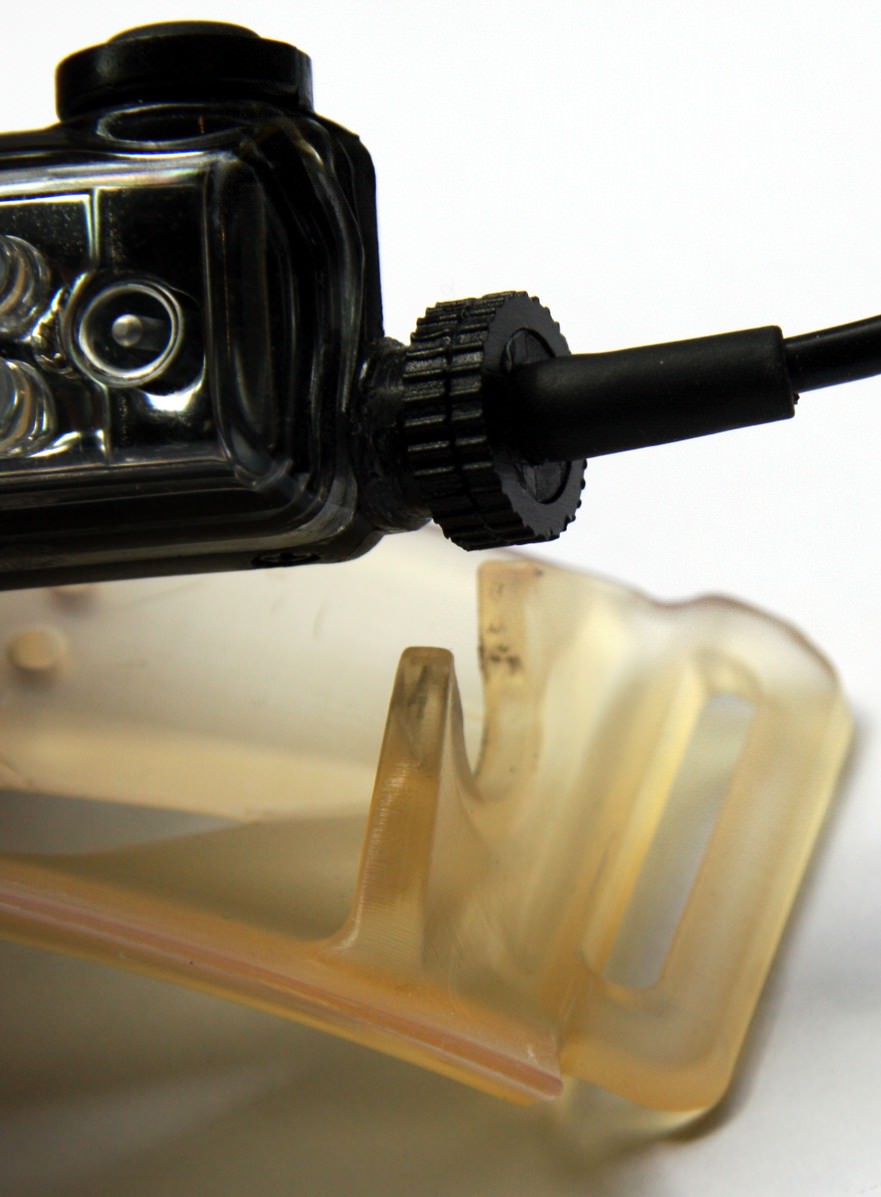 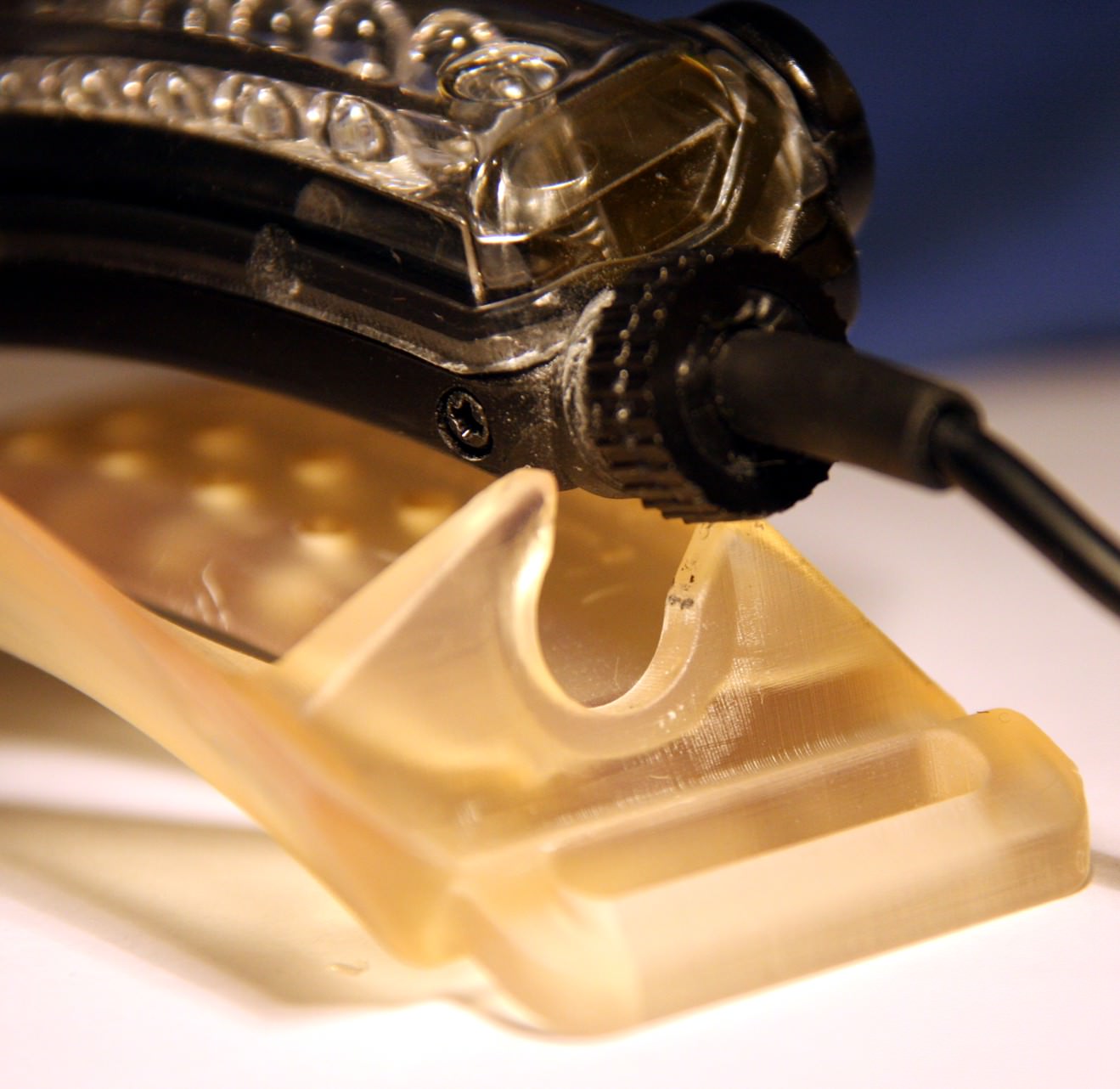 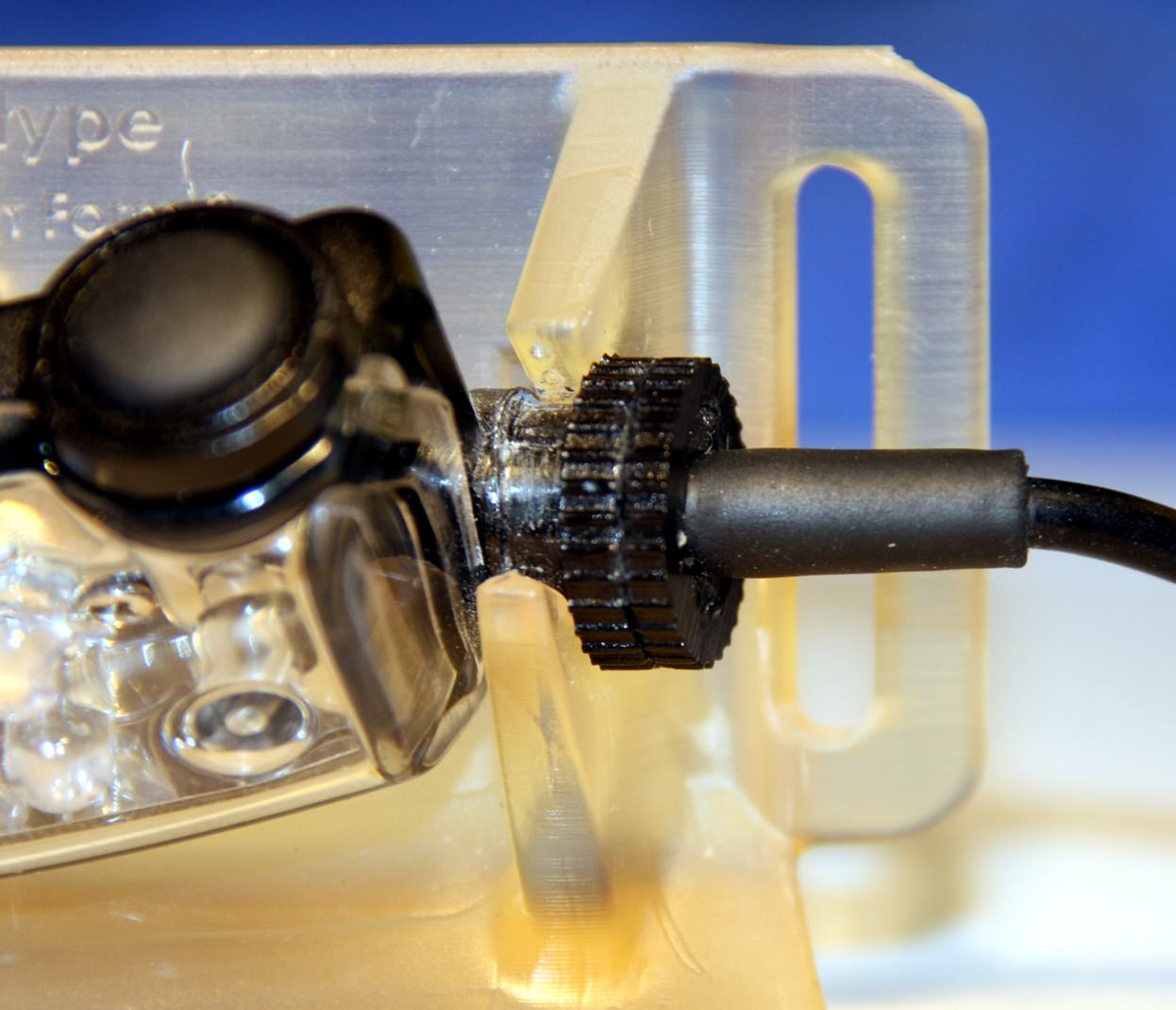 (The wear on the cog is from abusing the lamp through dozens if not hundreds of snap fit tests during design iterations to get the feel just right)
. 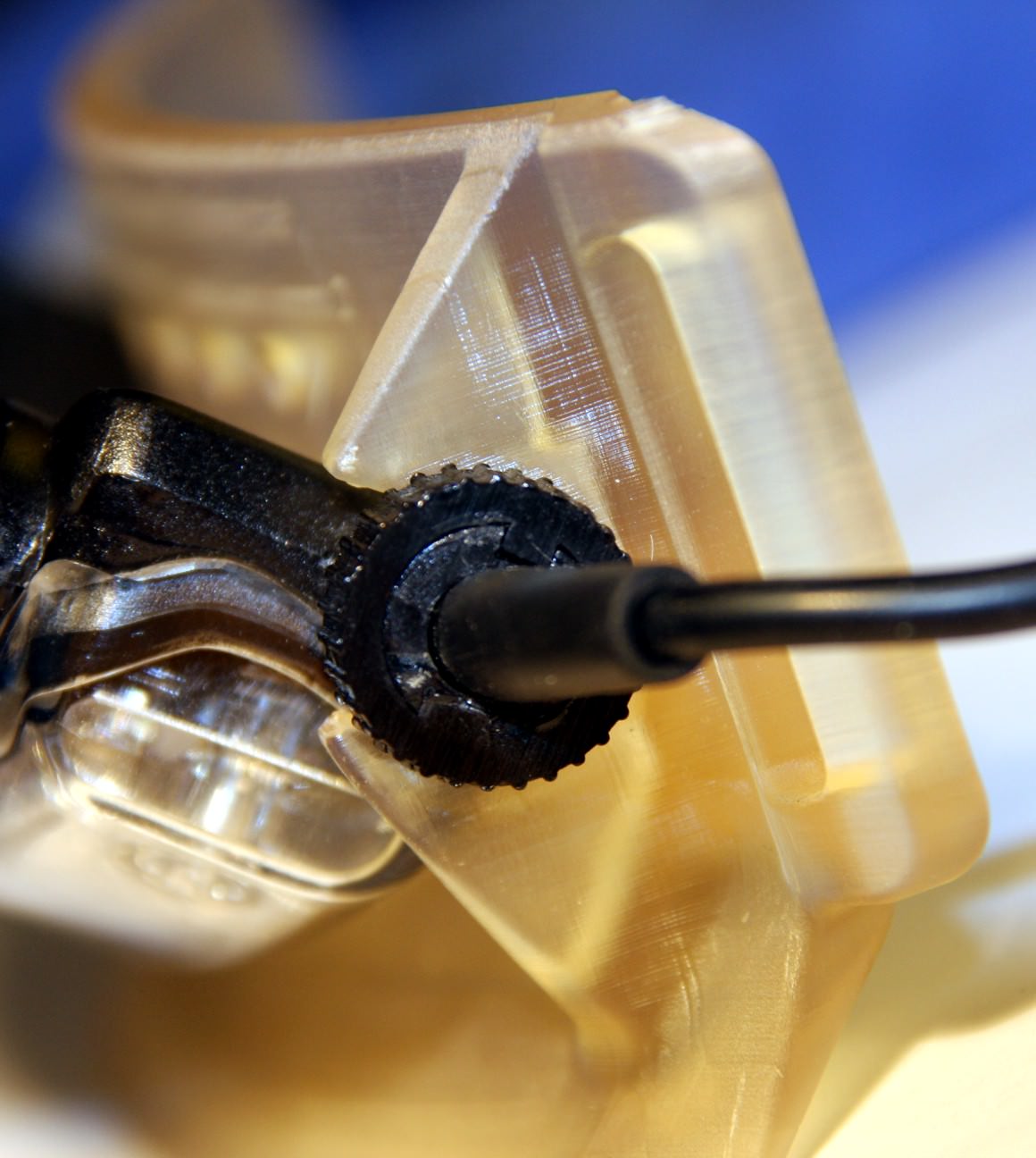 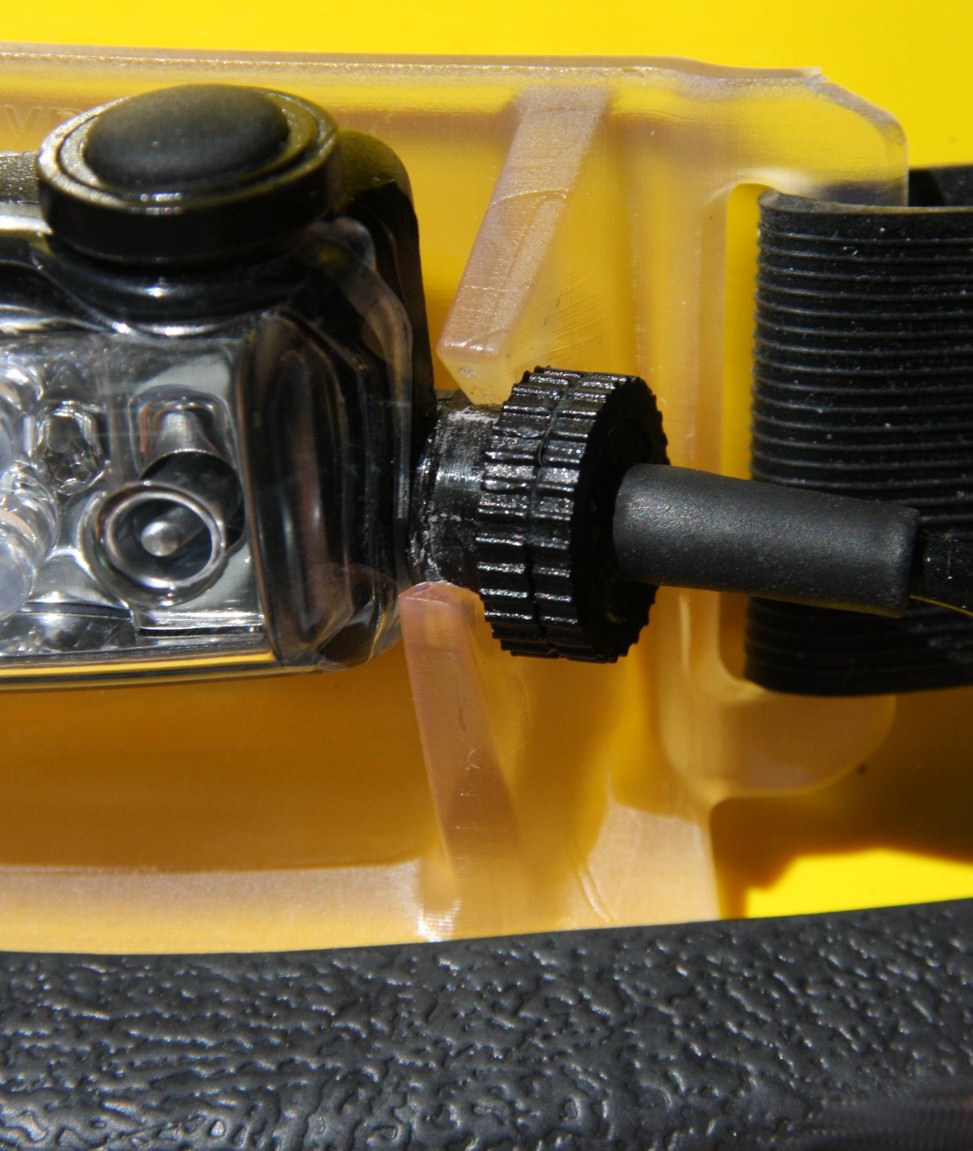 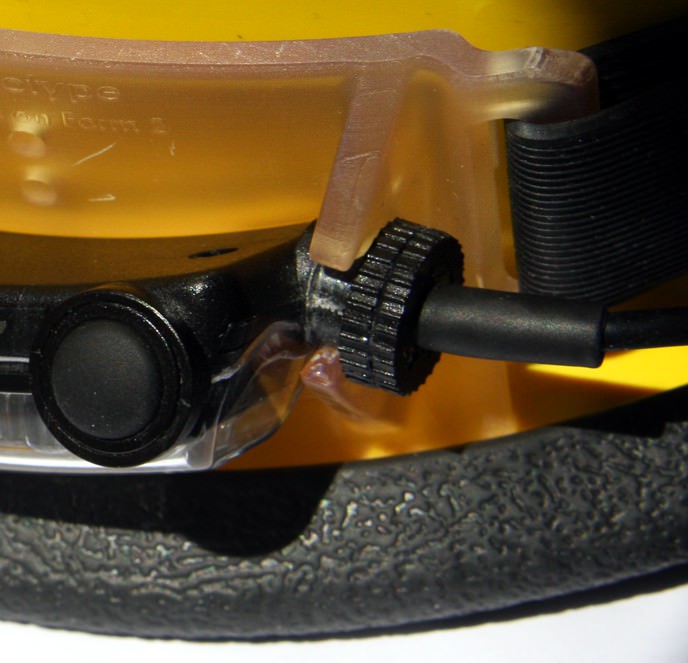 Looks pretty cool. How about one of the overall product if possible. I understand if not.

Are the led’s your own design as well or is it something available on the market already?

The latter. This project is just the bracket.

If you have a link to the led module I would be interested in checking it out. By the way…nice job on the bracket!!!

Looks pretty cool. How about one of the overall product if possible. I understand if not.

Here you go. Had to redact a couple bits. Maybe this is timely and will encourage people with printers to pitch in where they can help! 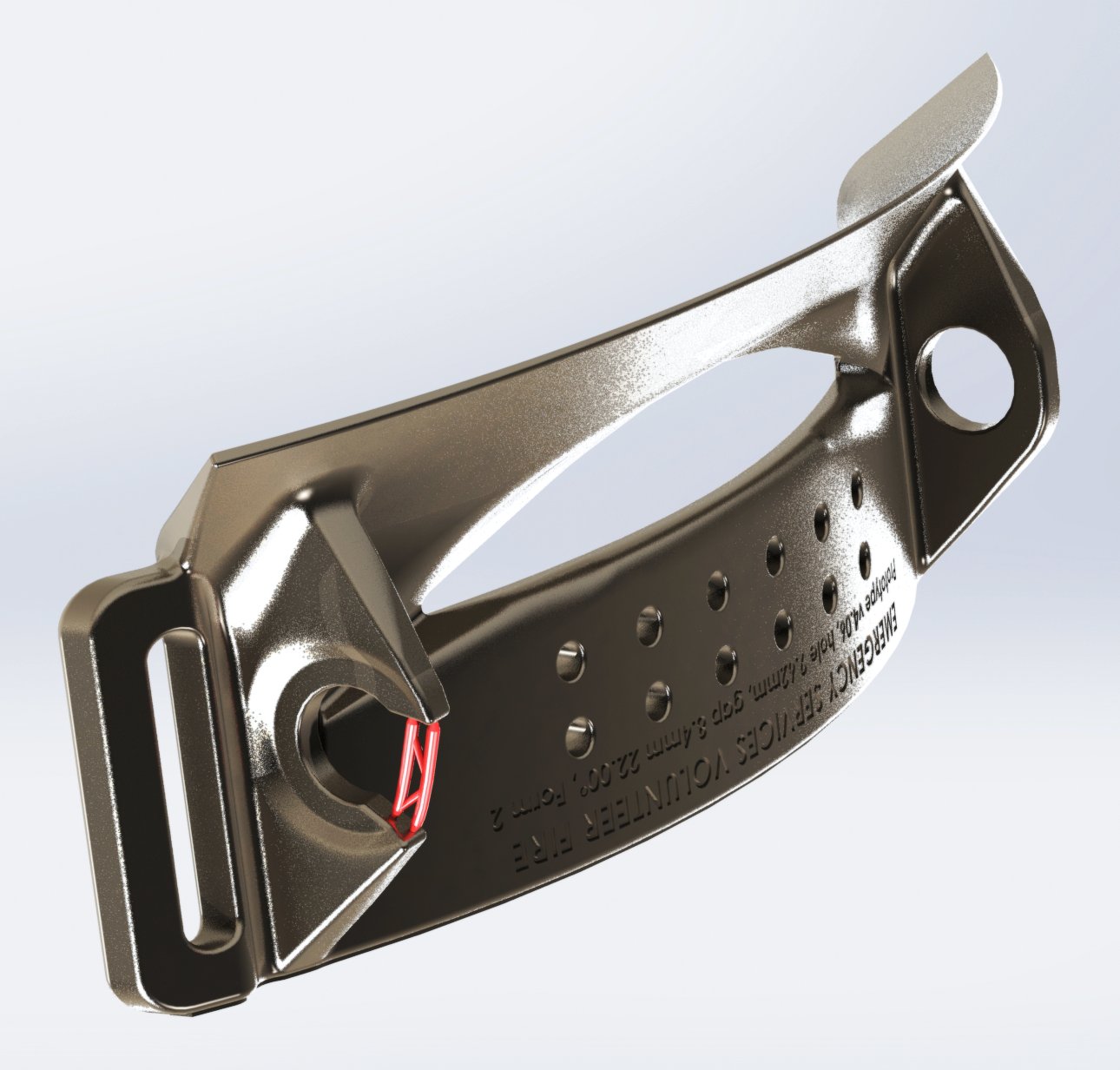 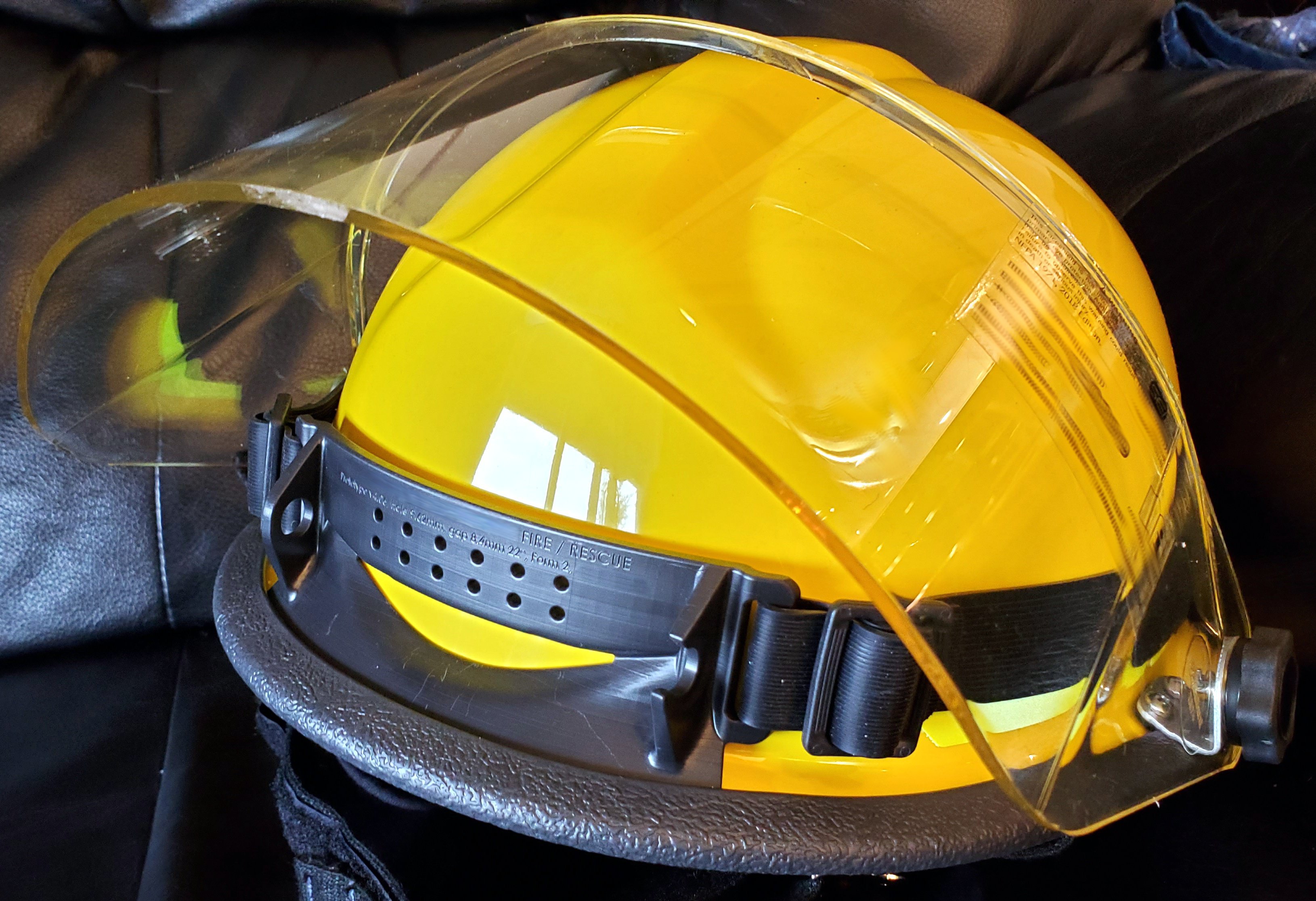 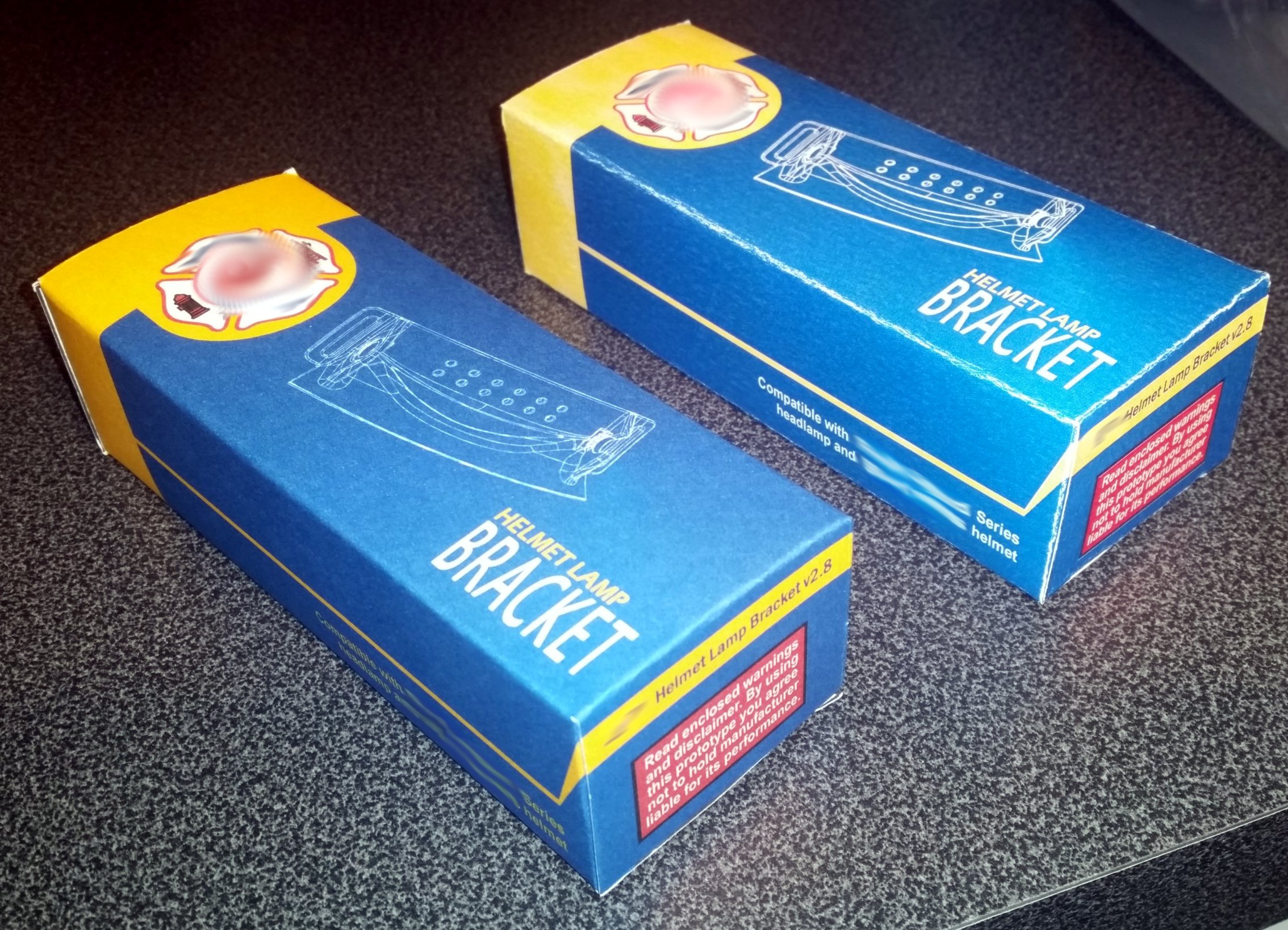 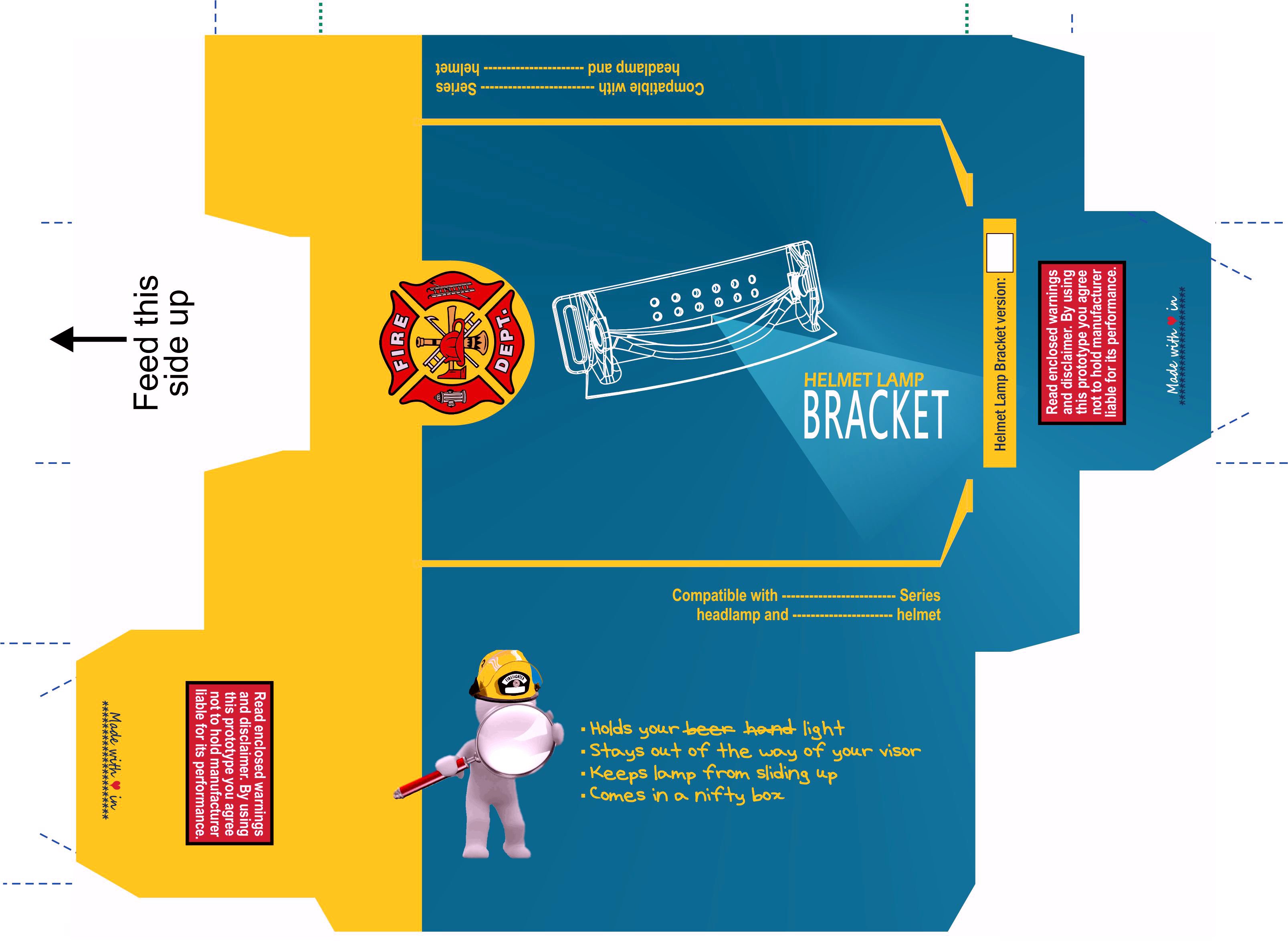 The carton was printed on cardstock paper (~250gsm) and laser cut/scored locally, after I couldn’t find any off-the-shelf boxes that fit right (or custom ones with lead times less than months).

Printing Masks to help with Covid-19