The 3L seamline was originally demarked as an “overlap region” in Preform: 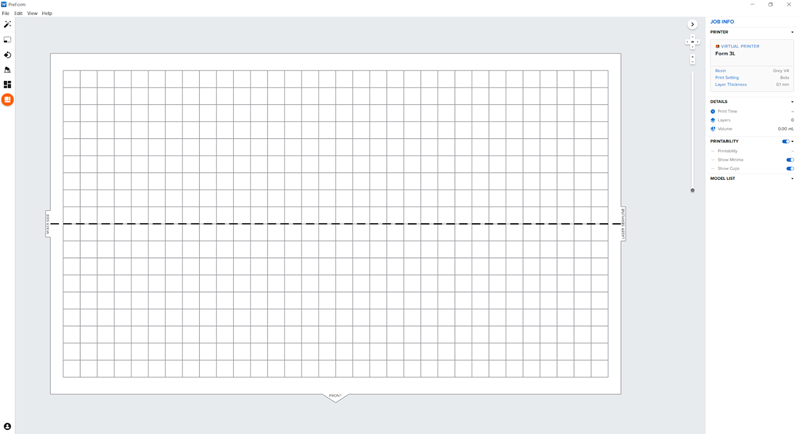 And this article says:

Does this mean a quarter of the length of each LPU (towards the middle) is never used?

What motivated the change?

If I’m printing a part that’s ~2/3 of the width of the build area is there any way to avoid a seamline?

Does the old behavior apply if I use an older version of Preform with the latest firmware?

Does Formlabs have any plans to give us a toggle in Preform to pick whether to optimize for speed or quality? (especially for a print that distributes naturally into the physical LPU zones - e.g. If I’m printing a part that would fit entirely in the region of one LPU along with a second, long, narrow part that fits in the non-overlapping region of the other LPU, and I want no seamline)?

I got this response from one of the Form 3L managers!

Before Form 3L started shipping in September, we were testing the seamline behavior shown in your first photo, where the printer will use a single LPU for each model whenever possible. In effect, this eliminates the seamline on models that fit within the front or rear 2/3 of the build volume depth (200mm).

We decided to stick with the current behavior (split halfway down the build area) because it’s intuitive, the seamline artifact is small enough to not impact many applications, and it optimizes speed over quality by ensuring that most parts are printed with two LPUs.

We accidentally added the overlap region to PreForm 3.7.0 but never released that seamline behavior, which is actually controlled by the printer firmware. So you won’t be able to use the old behavior with old versions of PreForm or firmware.

Thanks for those details, the rationale makes sense.

The seamline has significantly improved from when I saw it the first time a couple years ago at a user conference. Personally I don’t find it too bad. I barely notice it in Rigid. But I do find it quite noticeable in Tough 2K. Whether that matters really would depend on whether it intersects a critical surface in my model. Having a knob to change the behavior would open up some more options to finding an optimal, printable solution. I’d definitely be interested in the toggle you described between “Quality” vs “Speed”.

In fact, if I got to have my cake and eat it too, you’d let me “grab” the seamline in Preform and drag it to wherever I want within the overlap region.

My main surprise at the existing behavior was that a quarter of each LPU is essentially there for nothing. If something happened to one LPU and I had to rely on just the other while waiting for a replacement, it sure would be nice to be able to utilize its full area.