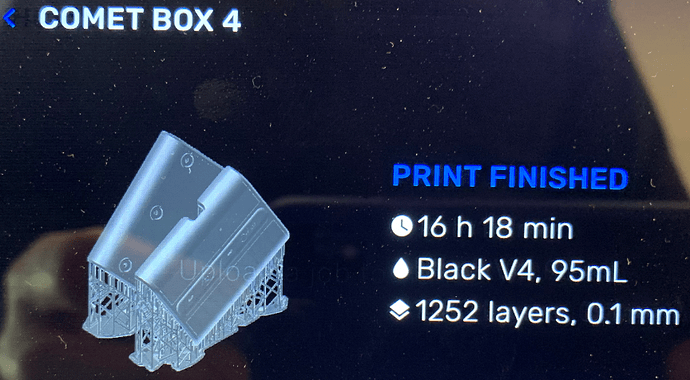 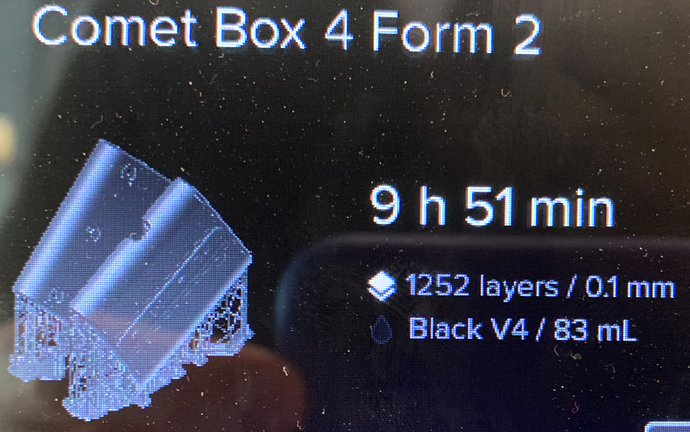 Interesting, thanks for posting. What do you attribute the extra resin use for? It’s about 12% more so not exactly insignificant.

The extra resin is probably expended on the support connections PreForm makes when generating supports for the Form 3, part of their advertised-yet-not-realized “pull off” supports.

Yes I’ve noticed that preform actually generates a lot more supports for the 3 than the 2…which is totally not what you would expect given the advertised lower level forces.

Noticed this as well. The supports on the F3 are much stronger and look much thicker than on the F2. So they are using more resin which makes snap/twist off from supports easier.

Damn that’s not good. Supports on form 2 were well optimized. Do u guys think this is something that will improve over time? Currently on the fence about trading in my form 2 for a form 3… For same build volume, slower builds and bigger supports not seeing the advantages here.

I would not trade up. I need 50 micron details and its not possible with the form 3 due to the wobbling layer issue. Ive been doing test after test - im on my 3rd liter of resin and I have had literally NO usable prints.

I`ve basically stopped using the printer until issue is resolved.

Thanks for the feedback Donnie, That’s so strange to hear… What is the wobbling layer issue exactly? I spoke with customer support telling them I have heard of these problems and they claim that’s not the case and everything is working right. Have you been in touch with them? Are they working to solve it?

vibrations, for exp: if your printer is on your workstation table, something as simple as putting a cup of coffee down can cause the lazer to move off, the printer should be set on a different table on its own other than right next to a pc playing PUBG, vibrational intererence is a real thing. I will sacrifice time for quality any day…

Let me address the Form 3 vs. Form 2 speed issue. We are actively working to increase the speed of Form 3 – this is one of our key efforts. I suggest updating to firmware 1.4.8, if you have not already done so.

Black resin is one we are still working to improve beyond Form 2. But, for resins like gray and clear, the latest firmware should provide an improvement.

Thanks for the response. I’ve figured things just haven’t been optimized yet. In the past I’ve noticed some painfully slow Z movement during some peel cycles (after the parts have already separated from the film), but I haven’t watched that closely since the last update to see if this is still a problem.

I notice that in the screenshots that you’re using black. In my experience with the Form 3, black is much, much slower than white. For me, the same model in black takes ~22 hours in black and ~15 in white (about 120 mL and about 1500 layers).

@nsayer we’ve seen the same with slowness with Black resin. We are working on it now. Stability across all resins has been our first goal. Now it’s time for more performance.

@leonhart88 could you describe or share the parts you are printing in Durable?

I can give you the .form file if you give me a confidential link. It’s a client part and so I can’t share it publicly. I can give both a Form 2 and Form 3 .form file.

I’ve also noticed that black is slow…clear seems to be quite fast. Generally across the board it seems slower than the Form 2 for now. I think the time estimates given for standard resins is pretty close to reality though. Not sure what’s happening with Durable.

Why do you still not allow the Preform software to show time estimates when a Form 3 is selected as a virtual printer? It seems like you’re trying to hide something. It would be nice to have a good reason why that’s not enabled, especially when the software KNOWS time because it has to be used when running a real, purchased printer.

Hi, for me there is never a time estimate for Form 3 prints, but you can always click on the print time and it will be calculated, also for a virtual Form 3.

longer print times imo, are only because the tray no longer tilts, which in turn creates a quiter machine with less
parts that may break. you see the resin needs to settle before the next layer. To me this is not a bad thing, less parts that may break is an improvement. This is the first form to use low force stereolithography (LPS) afterall. Im sure it will improve…

What I would like to see is, instead of onboard wifi, for privacy/security reasons, maybe an onboard usb to attach a wifi module instead of it being onboard

Here’s another example of the stark differences in printing time between the F2 and F3. This is really a production killer. Both parts started at the same time. Tough resin. 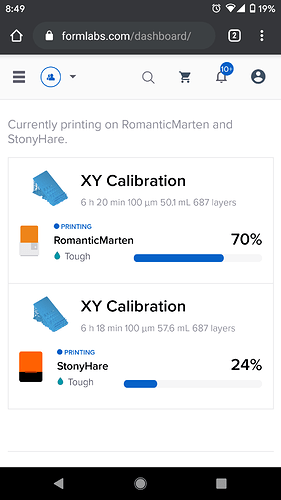 Out of curiosity: where was the Form 3 when the Form 2 finished? I imagine the Form 3 could catch up a bit as it does not wipe between layers?
Also, I assume both printers had the latest firmware installed and none of them had to fill the tank?