Can anyone throw some light on this? Is my printer faulty? Is the resin perhaps performing less than the figures Formlabs quotes?

Print tests seem to indicate the printer is performing fine.

So I printed various orientations of test bars for mechanical testing of the material, I tried green printed and post cured samples (according to the advice given by Formlabs in its various material properties publications.

Unfortunately I was not able to get mechanical figures that came close to theirs. Nor did a similar test at the local university using their test equipment.

From the Formlabs “Standard - Datasheet.pdf” we see the following figures 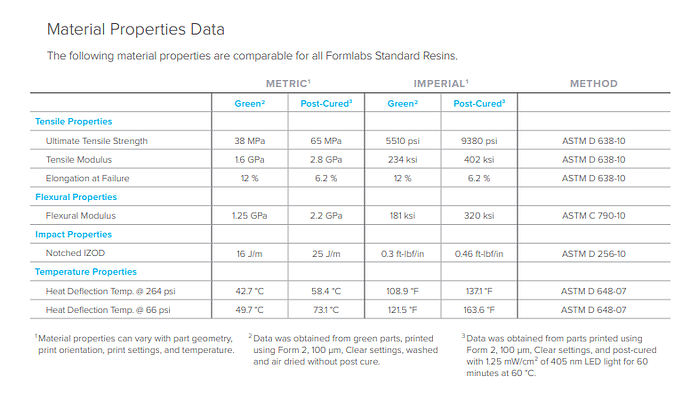 Looking at the various publications over the years we can see that the test results that they quote seem to have been the same since 2013, yet that would have been obtained from Version 1 of the clear material - we are now on version 4. We can see that Version 1 was not compatible for mixing with other versions, yet the claimed test figures remain the same. How is that?

In 2013 Formlabs published this:

Has anyone else done any mechanical tests and what figures are you getting.

I noticed the same thing (possibly old and out of date information) as I have been using different resins. A lot of my parts are for structural purposes where the parts are subjected to loading. Because of this and the potential out of date mechanical property information available from Formlabs, I conducted my own testing. Based upon the test results I have, the published data from Formlabs is fairly close for UTS for the resins I have tested. However, the accuracy varies a lot from resin to resin for Elongation and Tensile Modulus. The results I have also show that there is a significant difference between the different various Standard resins.