so did anyone bought a laser seperate from china and calibrated it himself? since formlabs will not repair the form1+ printers in the future we need another solution! I would NOT like to hear the solution is to buy the form2 !

I’m with you on this.

I have, on quite a few occasions, attempted to get information from FormLabs on how to replace/calibrate the laser, but was unsuccessful. They simply tell us that this is not a user replaceable component, as if this requires some “magical” tools to work and they are the only ones capable of doing such work. And yes, they will replace it for you for a mere $800.

If you press the point, your post will go unanswered.

I have already bought a couple of 405nm 120mW TO18 laser diodes, and if mine fails, and I know it eventually will, I plan on simply replacing the weak/burned-out diode with a new one. Since FormLabs won’t tell us how to calibrate it, I hope it will simply work, or that I can somehow make it work by adjusting the laser power in Open Mode.

If you ever figure out how to calibrate it, please post it here. I’m sure you and I are not the only ones looking for this information.

Nice to hear I am not alone! Are you german like me?

I have some questions about where to buy the laser diodes and which model it exactly is! Chances are high that I will replace my laser on my own soon since its already defect! I can’t spend every two years $800 for a new laser! Please lets get in better contact so we can talk

I bought the lasers diodes about a year ago on eBay. They are actually fairly common, as they are the type used in Blu-Ray Players. There are many different brands, but the most common and reliable are the Nichia and the Sony, although the Sony branded diode is actually made by Nichia or Sharp.

Do a search on eBay for 405nm 120mW TO18 laser diode, and you should have quite a few options. The average price is about $7 a piece. 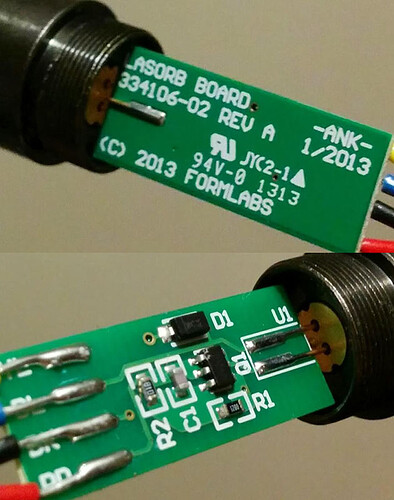 This is a photo of the laser from a Form 1, not a Form 1+, but it should be be very similar.

I was googling for them but there are a lot different ones to find with the “405nm 120mW TO18 laser diode” keywords. Anyway it can’t hurt to buy one or the other and disassemble them by this price range. I was able to trick around a little bit on my prints and made some supports thicker so I get succesful prints again. I also have to place my models around the center of my build platform as only models in the center fail to print somehow. After the firmware update and software update I had to set my build platform height back to zero to avoid warped models. I wonder what the hell they change in the programs and mess around. I would have liked to hear an announcement if they change configurations like this because I had a lot of failed prints to figure out what happend and wasted a lot of my resin.

After the firmware update and software update I had to set my build platform height back to zero to avoid warped models.

What firmware update are you referring to?

If I’m wrong, someone please correct me.

I was googling for them but there are a lot different ones to find with the “405nm 120mW TO18 laser diode” keywords.

It’s basically a laser diode with a built-in photo diode.

The Sony version is virtually identical to the Nichia, and it may actually be made by them:

Power Output: CW 120mW. Sealed Size: TO18(5.6mm). To touch the LD directly unless humanbody is well connect with ground. Otherwise the LD will be burned easily. Working under high temperature will increase the threshold current and decrease the...

Wonder if FL would allow an authorized 3rd party to service them?

@Dudemeister you are correct. There have been no Form 1 series updates in a very long time. The last update was the one that enabled the Form 1+ to use OpenFL. That one was not needed otherwise.

I asked but so far, nope.

Why would they want to loose such a cash cow?

When you need something fixed, they charge $800 for something that probably costs them $50-75 and an hour worth of labor to fix.

Or, better yet from their perspective, when the user can’t fix the unit or decides the cost of repairs is too much, they end up buying a $3500 Form2.

That’s why they are so uptight about parts or DIY repairs. Make no mistake, IT’S ALL ABOUT THE MONEY.

I believe the laser used is <$300 and not much for labor for installing but probably time consuming adjusting the focus and collimating it.

The laser diode, which is what we need to replace is about $7, not $300. Besides, we’re not replacing the entire laser assembly. That assembly contains the cylindrical/barrel case, a screw on collimating lens, and the laser diode which is soldered onto a Formlabs PCB shown above.

Those components, (the complete laser assembly) probably add up to about $20. The laser barrel and lens cost about $7-8 in small quantities, and the PCB, assorted resistors, diodes and transistor are less than $5.

As for the work of focusing the laser, it’s a simple matter of turning the front part of the barrel until the beam is focused to whatever specifications they need (distance & beam/dot size). That process should take less than 10 minutes.

The calibration process is a matter of determining the actual output of the laser. That can be done using some standalone testing equipment, or more likely it’s done by reading the laser’s own built in photo-diode (I did mention the laser TO18 package has a built in pho-diode). The output of the photo-diode can be read and the reference output can be adjusted accordingly.

I have a feeling that most of the diodes made by the same manufacturers have nearly identical outputs, and in general, replacing the laser diode and not touching anything else, should work. Whatever variances there are between diodes, are probably too small to have a real effect on the existing calibration.

But all this (the bit about calibration) is conjecture, so the only way to find out is to actually try it. My printer is currently working fine, so I’m not going to try anything until the laser goes out. But once it does, and it eventually will, I will do the diode swap and report the results.

A bit of a theoretical info on the FormLabs PCB (or how I think it works):
The laser output degrades over time. As such, it requires more power to deliver the same output level. It’s for this reason, the laser diode package also contains a photo diode, which reads the laser output in real time.

This is where the FormLabs PCB comes into play. It does double duty, it provides regulated power to the laser, while at the same time, it reads the output of the photo diode, which it sends to the main logic board. The logic board checks that output against the original reference reading which was obtained at the time of the calibration, and increase (or decreases) the power to the laser in order to match the original reference output.

Over time, the input voltage necessary to drive the laser’s output to the desired level, exceeds the safety margins, at which time, the laser simply can’t output enough power to do it’s job as it originally could, so it requires replacement.

The diode should last way more than 10,000 hours. As far as the laser degrading over time I don’t know if there is a gradual fall off or if fails rapidly at the end of life. That particular laster has the lens built in on the F1+ and I believe it is a fixed focus so for fine tuning I think it is just a matter of shifting it forward and back within the mount? The laser with lens I saw as printer parts from China were $299 and has a connector that goes to the board. It doesn’t look like it is soldered on. Maybe the earlier models they were?

There shouldn’t be much fine tuning when replacing that type of laser unless there are drastic differences in quality. Perhaps that can be done in OpenFL with a few print tests?

The diode should last way more than 10,000 hours

That’s marketing specs, not real world specs. While a laser may output a light for 10K hours, it will not be doing it at full power. There are a few white papers that you can download that show the life expectancy of lasers, including Blue/violet lasers.

Also, as the laser ages, in order to maintain a certain output level, the electrical current that drives it must be increased, which leads to faster degradation yet.

So as you can see the 10K hours spec is not accurate at all. I’m sure someone can come up with a equation that would tell us the average useful life expectancy of these lasers, but I think the number is more like 1000-1500 hours or less.

According to my exported stats from the dashboard, my Form 2 has printed for about 1900 hours and still appears to be working fine. (The laser is probably only in use for 30% of the print time, given the peel and refill operations… still, there have to be quite a few users who are well beyond my usage.)

Also, as the laser ages, in order to maintain a certain output level, the electrical current that drives it must be increased, which leads to faster degradation yet.

My informations differ : at least for some hardware (still speaking about 400-500nm-ish LDs) the ageing is less pronounced if the LDs are driven at their nominal current rather than lower. We also have marginally but still noticeably less pessimistic output values after prolonged usage. The way the LDs are driven and last but certainly not least the cooling are important factors as well (these things don’t like to get hot).

I agree that after 10k hours the laser will not be able to output 100% of its nominal rated power, but 1000-1500 hours or less of useful lifetime is just not a realistic thing to say.

Not sure how accurate this article is but seems the diodes will run consistent for at least 30% of their life before you need to increase voltage.
http://www.radio-electronics.com/info/data/semicond/laser_diode/lifetime-failure-reliability.php

Whatever the lifetime of the laser might be. I print the same models always and about some years now with the same orientation and support structures - but every time I got a software or firmware update I had to change some things. Like rescaling them and add thicker supports to them and so on. Its like the software-updates change how much power output the laser is working with. Working with a form1+ gets you grey hairs while fighting the bad print symptoms but not solving the main problems - so why should I invest so much money in formlabs anymore??? makes no sense to me so I will give competitors a chance in the future.

FL does tweak the exposures for the materials and constantly improve the support structure system. In a couple of cases the newer exposures didn’t work as well for my and I ended up reverting back to an older version. I pretty much only use the OpenFL now so unless a particular resin is discontinued I have no reason to change. Still have my F1+ and it is serving me well. I like the simplicity and freedom of the F1+. Even though the optics are exposed, keeping a cover on the machine when not in use solves that.