Watch the animation to see how well the figure can be posed. 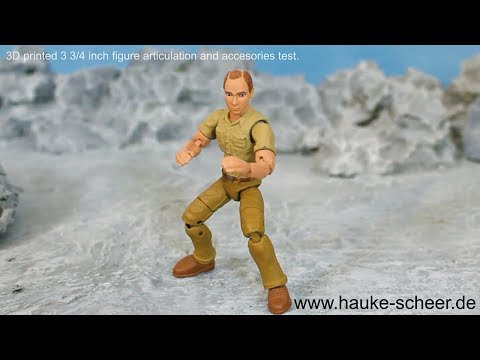 I have recently bought a Form2 printer to make smaller scaled action figures with better detail. At first I found working with resin quite hard compared to my previous work with ABS. But I finally figured out how to make sturdy action figures using my Form 2 printer. This figure has almost the same properties as a mass produced PVC figure. It has very sturdy joints, can hold accessories and can even have add on clothing parts. Paint chipping may be an issue in the long run but so far I am very happy. This is the closest to emulate a mass produced toy I ever came with a 3D printed prototype.
The figure was modeled in Modo. The plug holes for the joints were added via Netfabb later. Here is the picture of the joint setup. And some additional stills of the figure: Thanks everyone. Seems that I look a lot like Sheldon Cooper or Putin. At least in Action Figure form.

Hey @sheer. Awesome looking model! I was just wondering if you built in a tolerance for the joints… Because they look to hold very well. Thank you for sharing.

I am wondering about the joint looseness over time — in my experience with friction joints (and the formlabs grey resin) the joints become loose very quickly. How have you found the durability of your joints —have you had a chance to test the ‘life’ of the joints?

in my experience with friction joints (and the formlabs grey resin) the joints become loose very quickly. How have you found the durability of your joints —have you had a chance to test the ‘life’ of the joints?

I have made several figures over a number of months now and they still work perfect. Normal resin would probably not work but durable is really great for action figures.

Yes, there is a little bit of tolerance. It varies depending on the type of joint and the scale of the figure.

What resin did you use for this?

I think he mentioned Durable a couple posts up.

As rkagerer said, I used durable