I thought I’d add my own contribution to the ongoing discussions about home made uv curers. I first followed the cardboard box with nail curer design recommended by Formlabs: Easy UV Cure box for under 30. This wasn’t cutting it, especially for castable resin. So, I added some 405nm UV strips from ebay (power for 5m rated at 72W, so I thought it’d be pretty strong). Eventually, concerned about setting the cardboard box on fire and barbecuing the family, I bought a £10 box shelf from B&Q, along with some cheap mirror tiles, and put this chap together:

The interesting thing I find about this is that, by combining the nail curer with the strips, I’m raising the internal temperature. It takes about 2 hours to reach 45 degrees C, which, apparently, is the optimal curing temperature. Initial casts cured this way have been pretty promising.

Very impressive - I did much the same thing. I have had an issue with the mirror tiles coming unstuck in the heat. I have 90 watts worth of 405nm LEDS they are the nail-bar lamps. The Box gets to about 50 degrees after two hours but I find that 2 hours is optimal curing time for castable resin in the new box.

I used mxbon superglue from Maplin for the mirrors. That stuff’s pretty strong - I don’t think they’ll be coming off any time soon. Out of interest, have you found any problems with overcuring? I did a test with pieces cured at 4hrs, 8hrs, 12hrs and 24hrs. The 4hr ones appeared better at the fine detail than the 24hr ones, once cast. I’m trying another test cast to see if it’s the curing time or some bad sprueing on my part.

Nice set up… Just ordered more LEDs also for my new Ghetto chamber…Making a larger chamber so I can spread the parts out more as I print for production and usually print 20 -30 parts at a time and getting a little over crowded in my current chamber,

I was using LEDs and a 100watt Bug Zapper lamp and realized I was actually over curing my parts and due to uneven lighting it was causing warping and discoloring. Now with the LEDs only I am getting a much better cure at 2 hours or so, But have forgotten the parts in the chamber over night and have had no ill effects (Black Resin) I think the black pigment helps with that also.

This wasn’t cutting it, especially for castable resin. So, I added some 405nm UV strips from ebay (power for 5m rated at 72W, so I thought it’d be pretty strong).

I am looking for a similar strip, but all I see is 5M strips rates 2amps at 12 volts (thats only 24 watts). Can you provide a link?

Sure. I bought these ones:

If you are in the states here is where I bought mine… Same company I think. 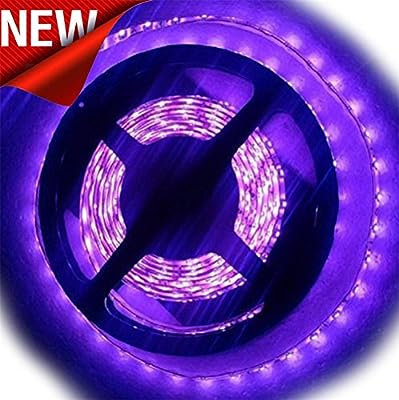 If you are in the states here is where I bought mine… Same company I think.

Thanks, Didn’t even realize that.

Here is ours. We lined a steel box with Galv steel sheet (tight friction fit) and Metal duct taped the corners. We, after tons of trial and error, decided to put the lamps below the parts as we noticed the chamber would heat up in minutes and not hours this way. It stays just under the optimal temp, I forgot the measured number, but we have had no problems post curing any of our parts. We print in Black, Tough, and High Temp. 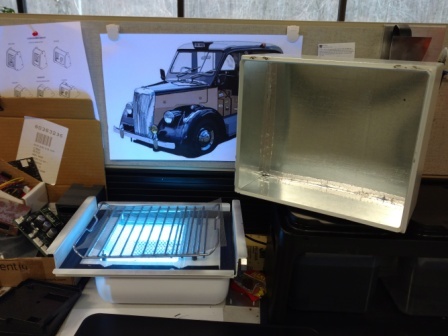 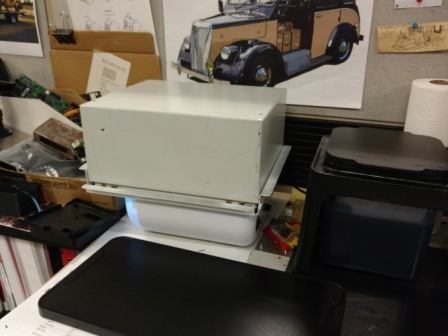