I am trying to 3D print two types of threaded holes: M2.5 and M3 using a Formlabs printer in my university. I would like to know what would be the approximate tolerances for hole diameter, major and minor diameters, in order to get a decent threaded profile. Theretically, the distance between the major and minor diameters is 0.433mm (ie., 0.866*0.5) for M3 and 0.389mm (ie., 0.866*0.45) for M2.5 threads. The bore diameter is 2.5mm for M3 and 2.05mm for M2.5 threads respectively. Since the actual bore diameter after printing would be slightly lesser, I would like to know what would be a reasonable tolerance to provide for these dimensions.

It would be great to know the answers for these specific threads, but it would also be helpful to know a general rule of thumb for designing any thread size.

Personally, I wouldn’t try printing the threads on such a small hole size. I would print a plain hole and tap it.

Wouldn’t manually tapping the thread lead to breakage? Since this is the first time I am working with this material, I am not sure whether it is as machinable as metals.

Under M4 or even M6 (depending on the resin) it’s no use to print the threads, they won’t resolve. Taping the thread usually goes well especially in small sizes like yours, just be careful and turn anti-clockwise half a turn every turn or two to break/free the chip… if the thread is long I would get out after 2-3x the thread Ø in order to clean the chips.

In any case, the best way to have functional threads is to use inserts, heat-press types don’t work well since the resin doesn’t behave like a thermoplastic, so we use the expandable ones most often. 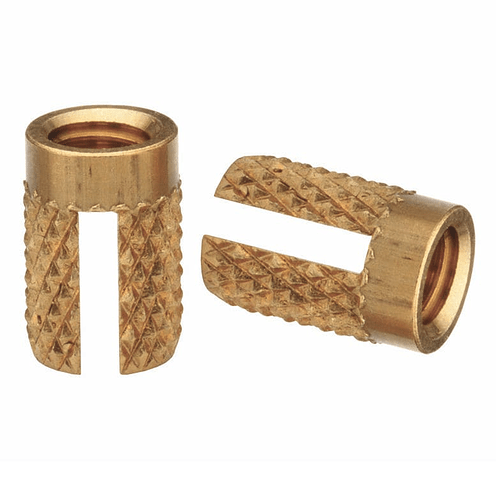 Another way if you have through-holes with access on the other side is to simple model the shape of a nut and put a standard nut there.

Finest thread I was able to make was a 1/4 - 28 but tolerances were off a little where the threads weren’t crisp so i had to chase them with a die. If you need to thread the plastic just warm it first with a heat gun, this will help reduce the risk of chipping and use some wax on your tap or die.
Threaded inserts are definitely a better option but again make sure you heat up the part before press fitting them.

Jason has some suggestions in this blog post: https://formlabs.com/blog/adding-screw-threads-3d-printed-parts/

Printed with no issues. The thread was M6.

I wasn’t able to print functional smaller threads like m5, the printer wasn’t accurate enough.
The trick is to manually cut the preprinted threads before uv-postcuring! This way the material wont crack during cutting threads, Drilling small holes on hard Materials is the same, do it before Uv-postcuring otherwise this could lead to cracks.

I finally did the following: For the M3 thread, I designed just a bore and then manually tapped the hole. That seemed to work without any cracks or failure. For the M2.5 thread, I designed a nut-shaped extruded-cut on the other end of the hole and inserted an actaul nut. That also worked without any issues. Thank you for the ideas.

Glad it helped ! Since my comment I also did the nut thing with an M2.5 thread, since I didn’t have the space to fit a proper threaded insert.

I have regularly printer M3 threads with no failures yet, as long as the thread is formed vertically in the printer at 0.025 or 0.50 resolution. i.e. you need to use the Z resolution, not the x-y, as the dot size is too big.

Slightly off subject, I tried to print some 16 pitch Acme threads and I did a visual offset for clearance. I printed the model vertically so I didn’t need supports on the threads and when I tried to test them they were actually drooped and distorted. So that type of thread should be printed so they are perpendicular to the build plate. Standard V threads are less critical.

I also suggest using plastic screws, such as PC (polycarbonate), these are often similarly priced anyway and won’t wear out the 3D printed thread that easily.

Another trick…
Now that I have a 405nm laser pointer- when I do a side pocket or other recess for a nut, I thread an oiled or waxed screw thru it, and then apply liquid resin that I set with the laser so as to full embed the nut so it can’t fall out.

I will be interested in revisiting this thread when the Form 3 with a smaller spot size is released. I’m hoping it will be possible to print functional threads a size or two smaller than what is currently possible on the Form 2.