Is there a clear resin that I can use to make a snow globe?

I’ve had acceptable results with the clear resin without polishing it - I’ve tried 2 methods, brushing on clear resin and curing it in a UV oven and also spraying with a UV blocking clear coat. I only used those techniques on flat pieces, not sure how well it would work for a globe.

I’d speculate that if you could get the outside of the globe smooth and shiny, the inside should take care of itself once it’s filled with water. It should act like additional liquid resin, filling in all the micro surface imperfections. Might have some slight funky effects from the differing indices of refraction, though. 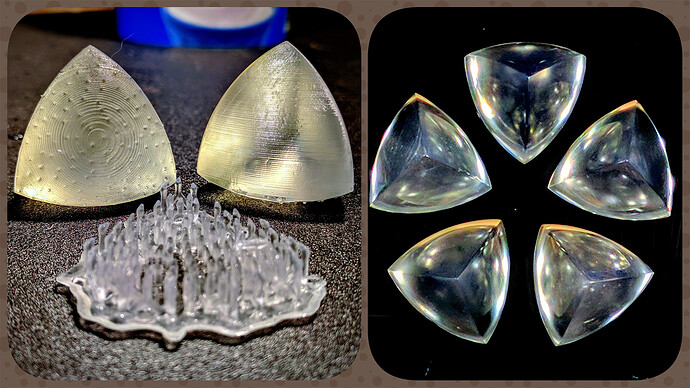 And there’s entries on FL’s own blog from people who made camera and eyeglass lenses from Clear resin!

@Volguus looking good! Yes I know that article but it could be difficult to polish the whole inside of that globe?

Clear Resin can be polished to be entirely transparent and we used it to make functional camera lenses.

For a snow globe where there’s more consistent abrasion, polishing might not be a permanent solution. We’ve been experimenting with clear coats that have the same effect and Rustoleum’s Clear Coat seems to work well. We’ll be publishing a tutorial on how to use clear coats to provide transparency shortly and it might be something for you to experiment with!

You could make the globe in 2 halves then you could easily polish the inside. When you have done that you could glue them together. Alternately you might try using a bit of clear resin and a 405nm laser pointer to “weld” the halves together. This way might have cleaner results. ¯_(ツ)_/¯

Another benefit of splitting it in half would be supports. I would be worried about printing a clear hollow sphere and having adequate support material at the top/bottom of the sphere without having supports inside where you cannot reach them.