Semi Urgent, Is this print safe to continue or am I asking for disaster?

Working on an overnight print, the edge of one piece is peeling off. For some reason the middle of my tank has developed a “dead spot” that isn’t sticking. It’s a new tank as of last week, maybe .5l printed through it. On what I thought was a standard batch of parts, one failed and nothing has stuck on the bed in that location again.

This print started good but one section is hanging off. Should it stay put? Typically I have really hard bed adhesion except in this new problem spot.

I just snapped this picture between layers. 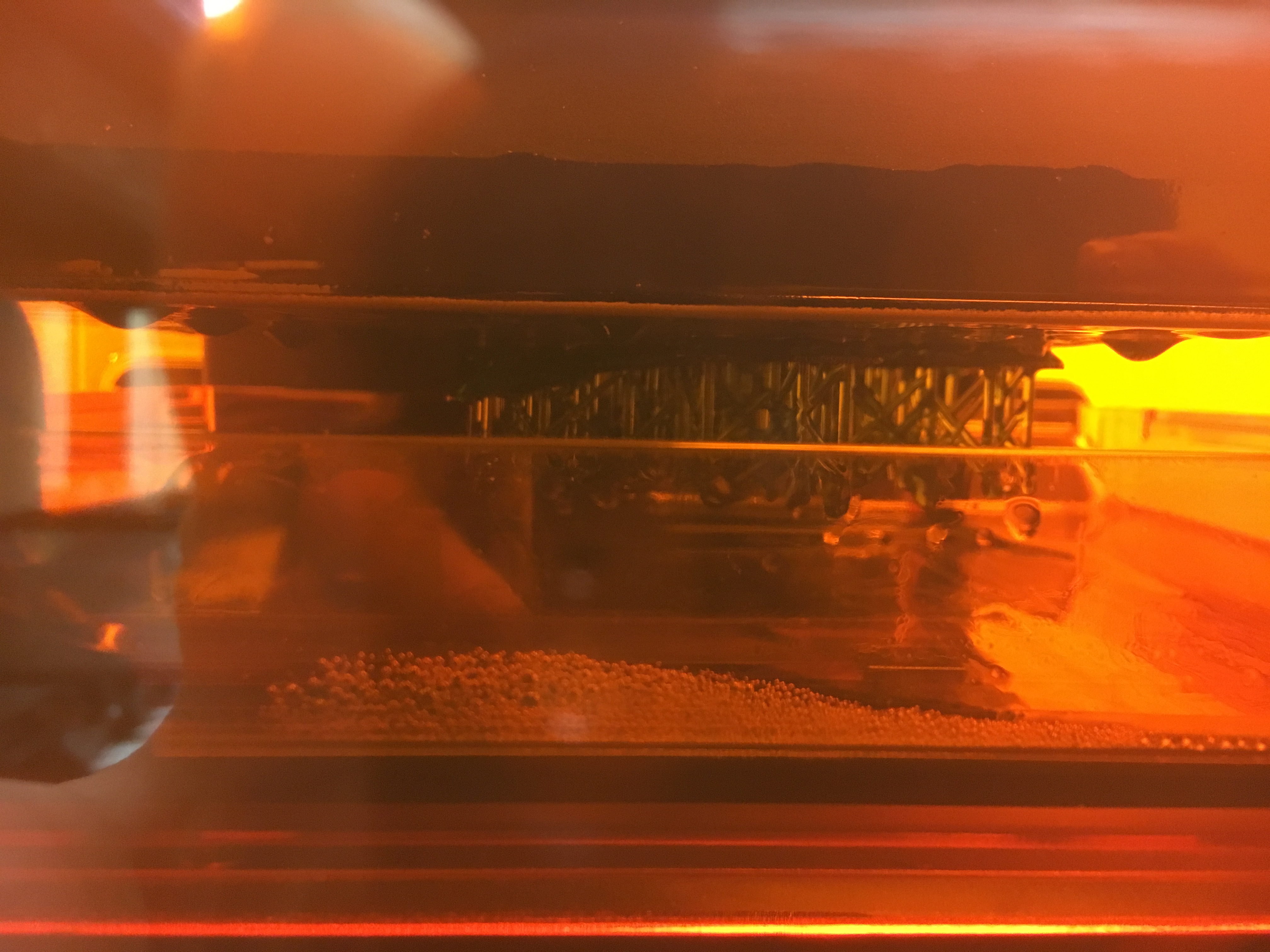 Yep, need to stop this print.

So I stopped the print…not because of the peeling (was keeping a very close eye on it) but because the actual part wasn’t even printing. It was a cylindrical tube that eventually branched out and came back into one tube. Not a ton of surface area.

Any ideas? Brand new bed, almost new tank. My experience with the Form 2 was initially flawless and now I’m getting more and more issues and failed prints 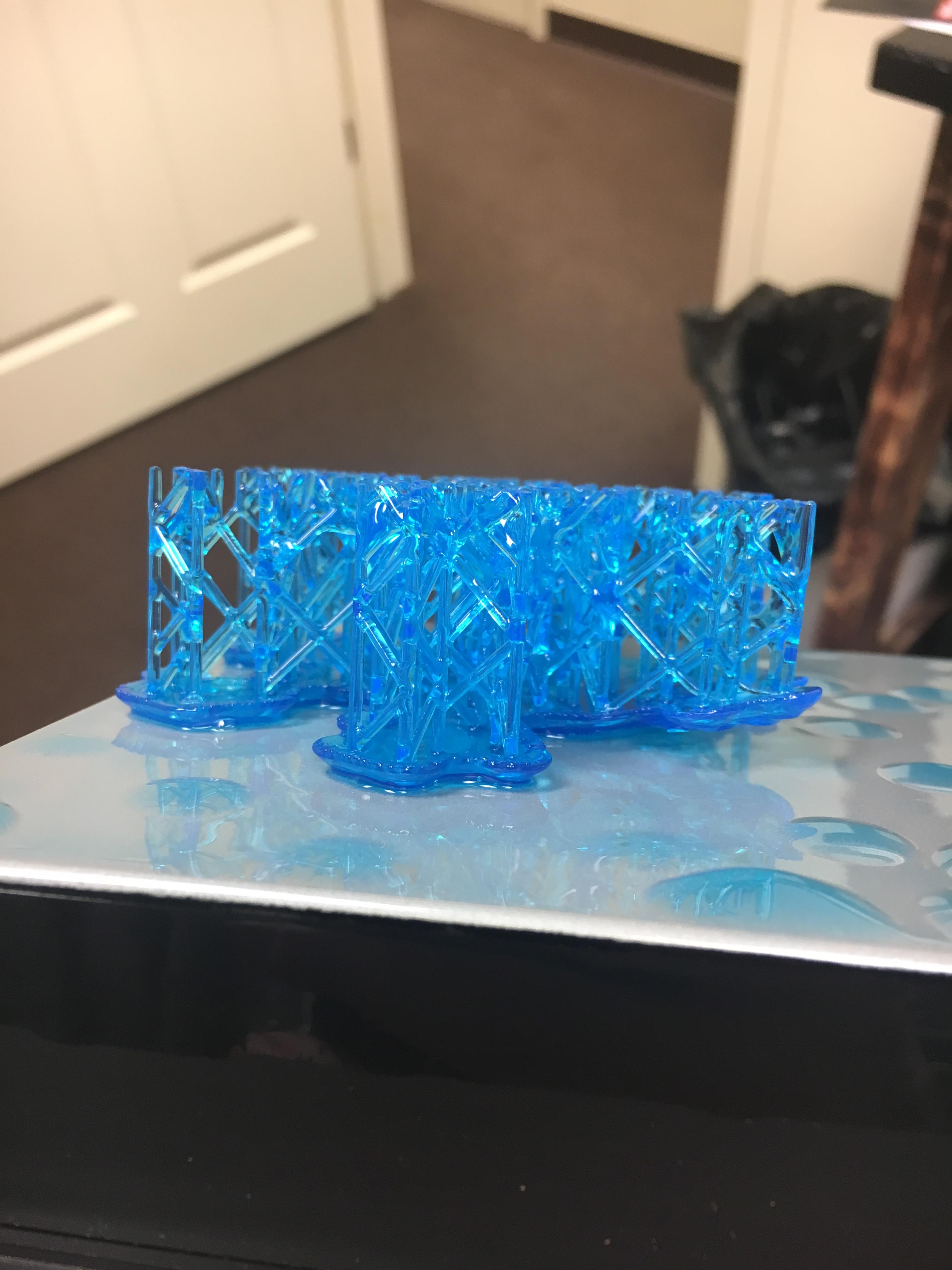 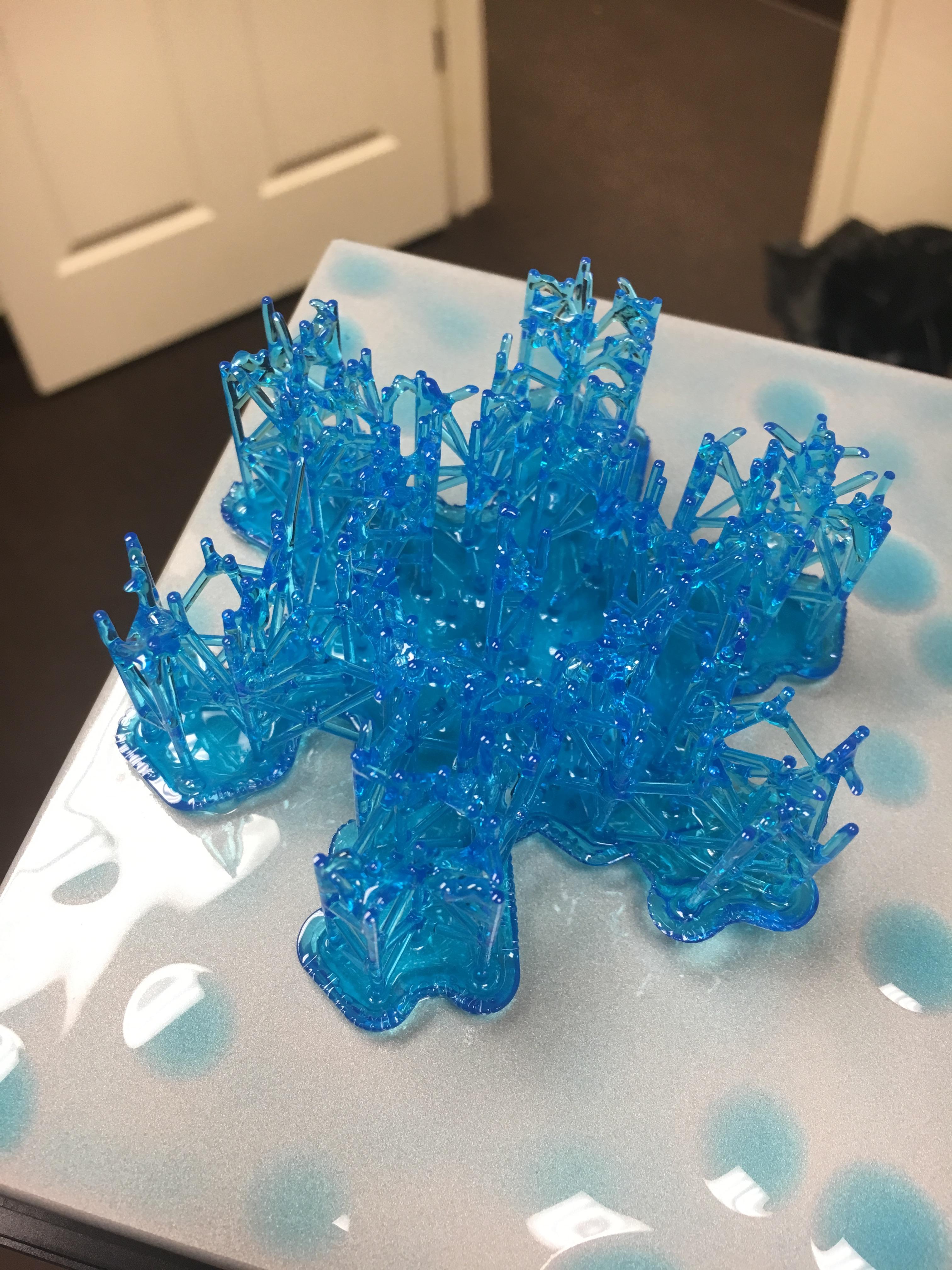 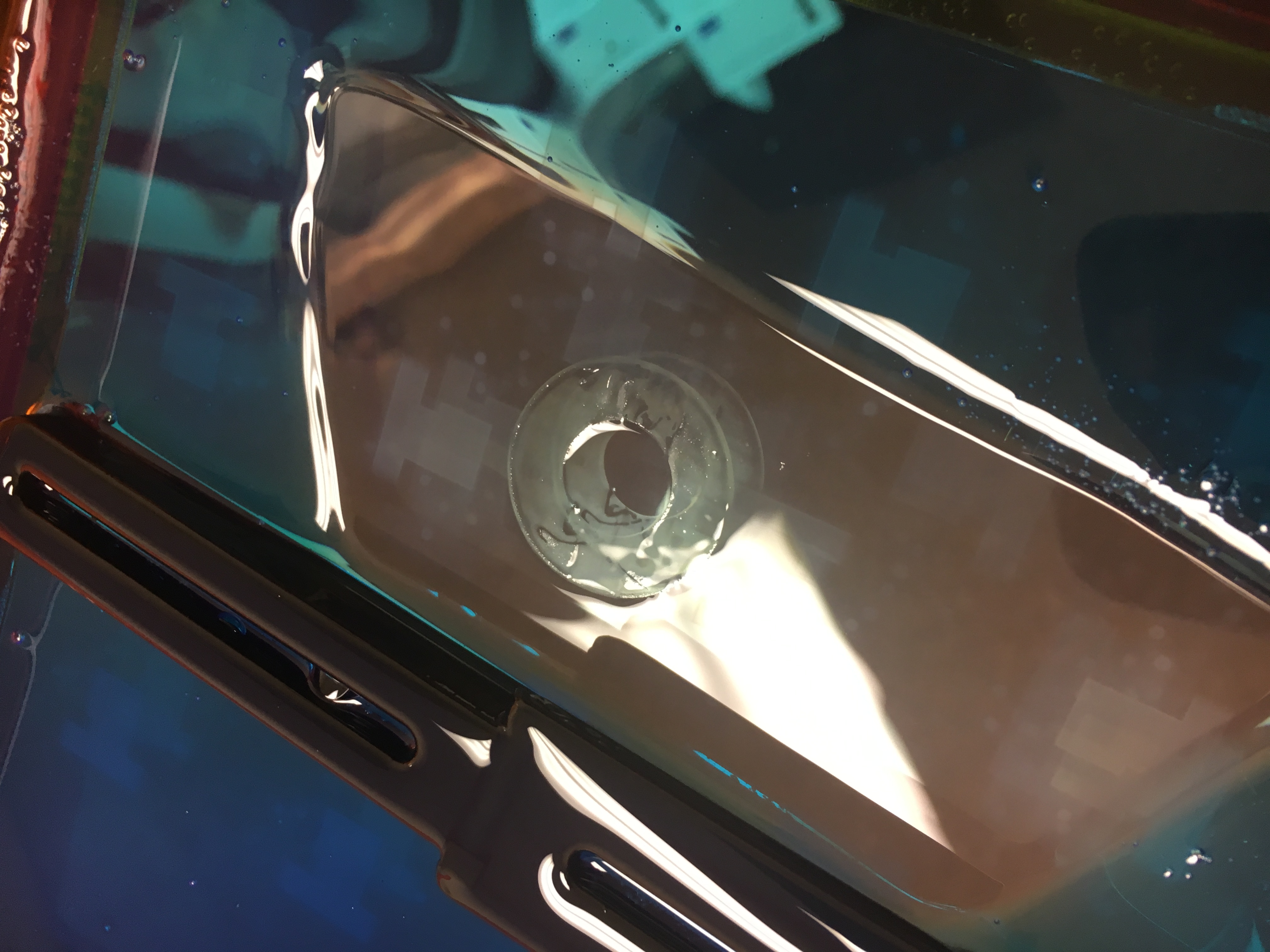 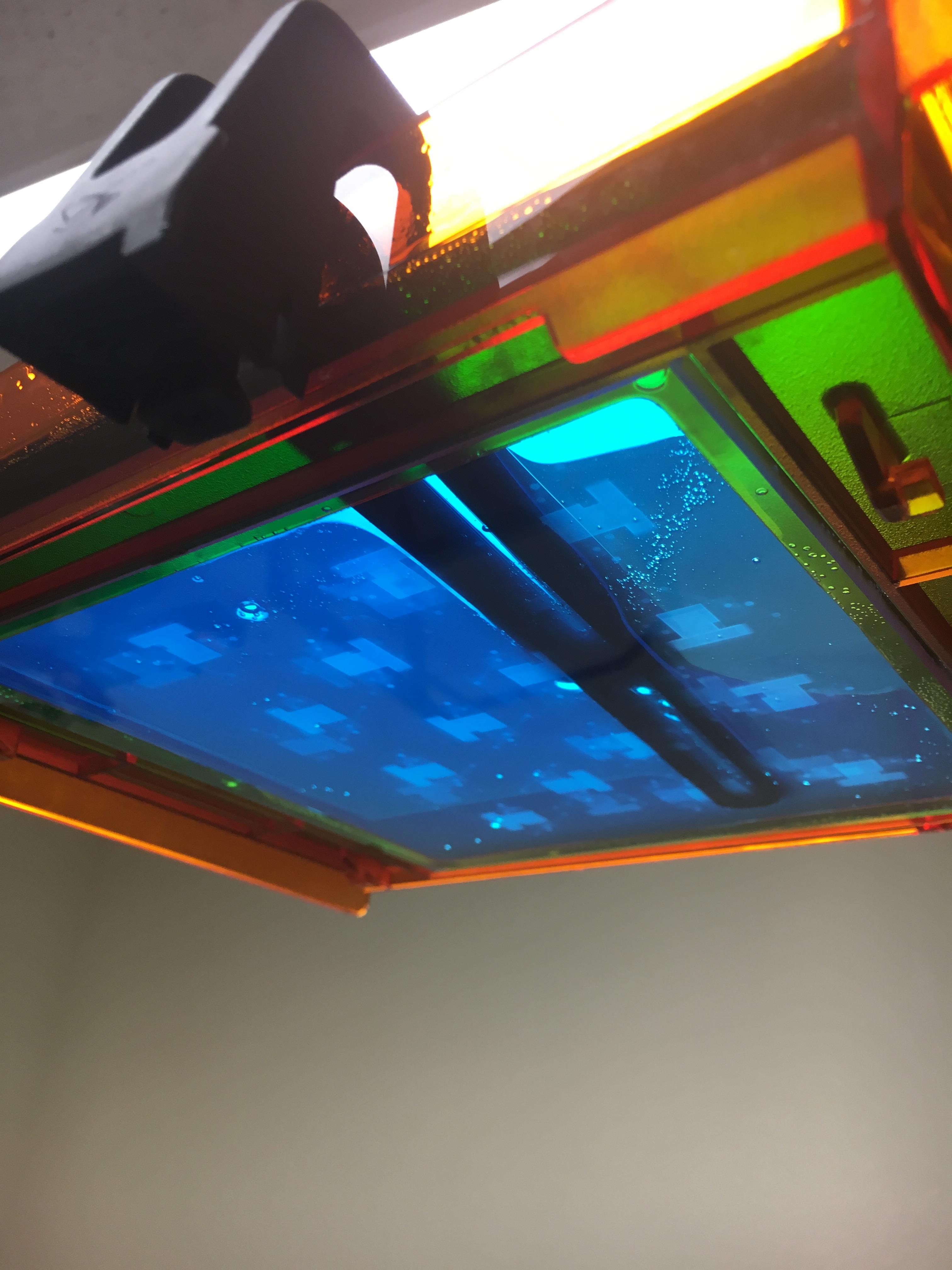 I had something similar happen to me with old Tough V1.
I think i traced the problem back to temperature of the platform…

Now i know this sounds weird, but bear with me.

What was happening was that first print of the day, while the platform was cold, would fail in a way similar to yours, or even straight away during the base layers. It would just peel off, or, a corner would lift and supports would be rubbish.

The next print, however, would be just fine, at which point the platform was warm (warmed by the resin).

I never experienced this before, or with any other resin.
It was a pretty solid, albeit small sample - 3 days, 6 prints, exact same behaviour, first fails, second is fine.
If it keeps happening, try warming up the platform with a hairdryer before printing, see if maybe, just maybe it helps.

I oriented the part vertically for the cleanest printing yesterday, used stock Preform supports as I figured it would be a success.

I’m about to start a one click print and see what happens…gonna hit the bed with a torch and get it hot to the touch then go for it. If it doesn’t work I’m not going to be very happy as it’ll be a ton of material wasted.

No need to get it hot, just warm. Torch is probably an overkill.
In my case, it was a difference between noticeably cold to the touch and warm / close to ambient temp.

Let us know how it went, i’m curious if my issue and observation were just a fluke or not. 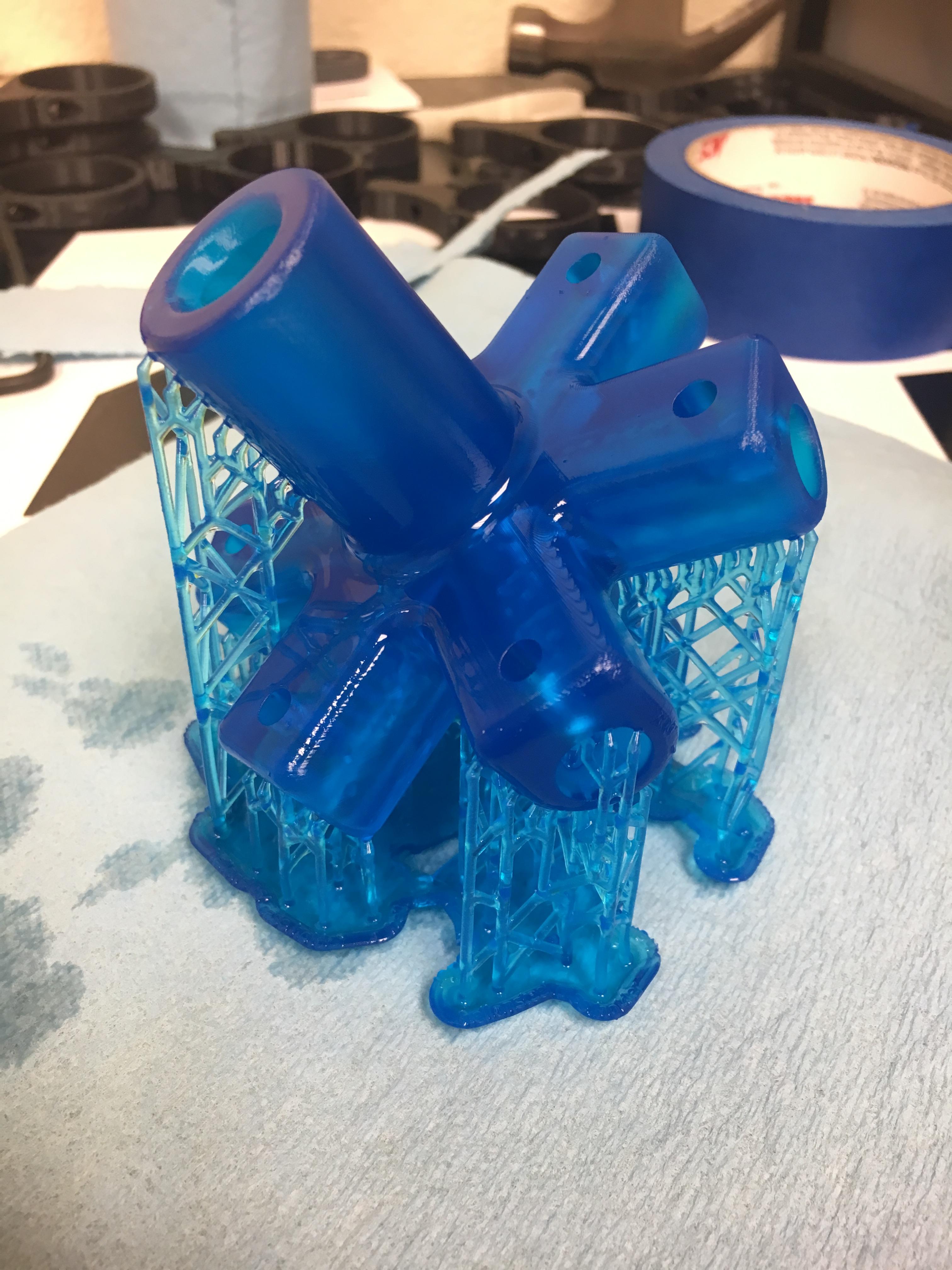 When I said I torched the bed, it was just to get it warm. The resin is always warm because our printer room stays toasty. I got it almost hot to the touch and started the print.

Yeah, my working theory is that the whole reason it happens is precisely because the resin is warm (but the platform isn’t). Beats me as to why only with Tough. I thought it was specific to my super-old batch of Tough v1, but looks like it happens with the new Tough too.

FWIW, Tough adheres to the platform way less than any other resin, in my experience. You can often practically peal it off with your fingers. It’s also the most temperature sensitive (lowest glass transition temp, i guess). I’m guessing that might be the reason.

FWIW, i never had that happen to me until i started using Wash. Since i put the platform in the Wash, it gets cooled down quite a bit, first by being immersed in the IPA, then by the IPA evaporating.

We’ve had similar problems with the Tough resins. We actually found decent success by increasing the Z-height offset to +0.2mm. Our working theory is that the viscosity of the resin is a bit higher and there isn’t enough settling time in the existing firmware settings.

Does that offset increase the distance from film to bed?

My parts usually stick SUPER HARD. I break the bases trying to remove them all the time, and several times it’s been like 20 minutes of chipping away at the resin to clean the bed off.

The plot (and resin) thickens!

To my knowledge, positive z-height offset means more distance between film and bed. E.g. +0.2mm that @cond0056 did. If you parts are stuck on the bed “super hard”, you should probably consider positive offset adjustment.

BTW, similar failed prints had happen to me with both Dura V1 and Clear V2. Many things could have caused this…