Safe to print at home?

Yeah thats a good idea, though the space I have for the printer is limited and doubt the box would fit. I think ideally it could even be a bin bag that velcros to a cardboard base the printer sits on with the vent hose and fan you mention.

Maybe a custom clear cover like this. just need to figure out a vent hose attachment.
https://www.coversandall.co.uk/custom-clear-vinyl-covers.html?gclid=Cj0KCQjwreT8BRDTARIsAJLI0KJV1paN4DppNP4Udsr9fWemployee monitoring softwarer54afOjHbSweqI0i9bfVeulwJOVbrYQVUaAp7zEALw_wcB&ef_id=Cj0KCQjwreT8BRDTARIsAJLI0KJV1paN4DppNP4Udsr9fWr54afOjHbSweqI0i9bfVeulwJOVbrYQVUaAp7zEALw_wcB:G:s

Any issues with temp in the garage?

Definitely. Temperatures swing pretty rapidly in the garage, so you have to do something to stabilize the temperature a little.

I’ll eventually build a fume hood for my printer, but for now I have a small heater that I put under the printer during the night.

Digital deck covers makes a cover for both the form 2 and 3, I had/have both and they work great.

I was in the process of designing some parts to attach a hose to the cover plus a small fume extractor. That really should be enough to pull all the smells out and then it’ll depend on how good of a fume extractor one is running. I have a well ventilated space now so I didn’t need to do that.

My space can also get quite cold. I haven’t noticed any significant issues caused by temperature. The internal heater tries to keep everything at a set point and it seems to hold fairly well.

I’m bitching about this in another thread. I want a pre-heat function. The resin gets very viscous when it gets below about 65ºF. So thick, when the printer does the initial fill and it tries to move the wiper, the wiper can’t move. You have to stand in front of the printer and “assist” the wiper each time it tries to move (closing the cover in between moves so the resin continues to heat up). It takes ~10 minutes or more in my 65ºF basement before I can walk away from the printer, when I start a new print and the printer is “cold”.

If you put the printer in a cold enough garage, the warmup will be significantly extended and you may not be able to get the resin to temperature at all. But if the printer gets to temperature, I don’t think it matters where it’s located.

The other consideration would be thermal cycles. As things change temperature, they change size. And how much they change is a function of what the material is. Different materials expand/contract at different rates. This can build up stresses and cause things to shift. It can also make screws and nuts loosen up. I don’t know if FL uses loctite on the fasteners. But if the garage isn’t fairly stable temperature-wise, over time this might also be a concern…

The heater in the Form 3 struggles when the room is close to freezing. i.e. if you start the print during the day, it will start just fine. But as temperatures hurdle towards freezing at night, the internal printer temperature drops. I’ve had failures from this.

I use a small ceramic $50 space heater I bought on Amazon in my two-car garage. The average outside temps can average around 20-30F as of this writing. My average garage temp stays at about 65-68F which is about what I keep my inside home temps at. If someone opens the garage door, the ambient temp will plummet, but will recover within 5-10 minutes because the things in the garage are all warm. If someone leaves the door open for 15 minutes however, the heater will need about an hour to return the ambient temp back to normal.

That said, I keep my printers in an interior workshop room with ventilation that vents outside and keep large and messy tools (table saws, belt sanders, etc.) in the garage.

Hey all. Just following up on this, I decided to design and build an enclosure as I will be printing in the bedroom and my partner is allergic to chemical smells. I also have a toddler running about and don’t like the idea of him breathing anything in.

I noticed even with grey resin there is quite a bad smell in the room, so hopefully this can block out the smell and exhaust it out the window.

All the wood was ordered already cut to size with all internal cut-outs. I live in a small flat so I don’t have any space or tools to cut the wood myself. I designed it so everything can just screw fit together with wood glue for extra strength. I’ve tried to make it as air tight as possible. The hole for the plug I sealed with rubber sheet that has a tiny hole that stretches over the power cord. The Perspex window was cut to size from the same place.

The idea is the printer sits in the box tray and the top cabinet just fits in snug over the printer. The extractor fan fits perfectly over the output mount, so when done just remove it and lift the cabinet out via handles. There are foam strips in the box to ensure the cabinet is sealed at the base.

I haven’t actually tried it yet so will do so this week. Hopefully it all works! 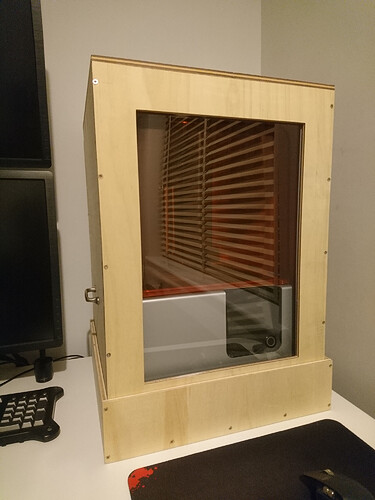 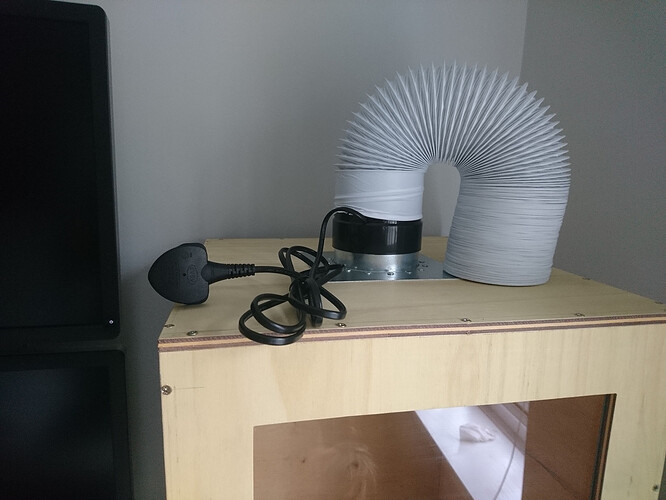 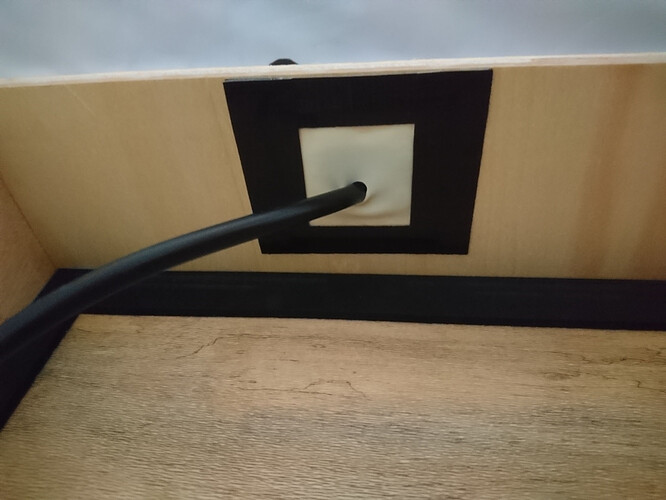 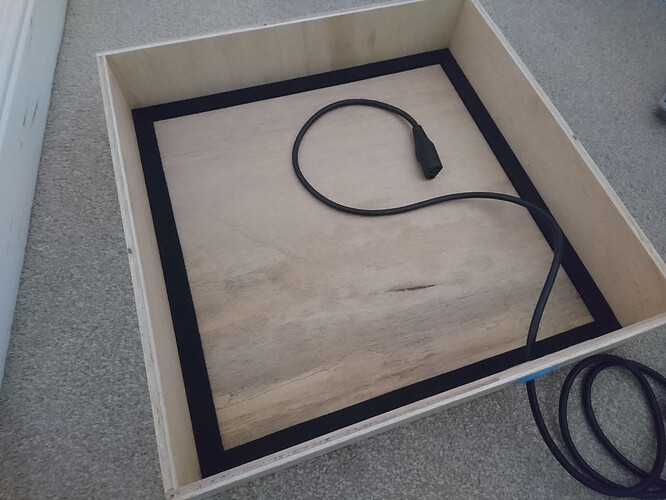 First time trying this case today. I made a Velcro based card with a hole to put the exhaust hose out the small window. So far I can’t smell anything where as before the room would fill with a heated resin smell. Also the printer is about half as noisy and protected from any uv light as I have the window on the box covered. I’ve been next to it the past 5 hours working.

If you’re planning to print while you’re away, a 36x48 inch steel kitchen prep table from any kitchen supply store will set you back roughly $120. Under the stainless steel shelf, they normally have a galvanized steel shelf. Keep everything on it, and invest in a high-quality fused or breaker-equipped power strip. You’ll pay roughly $150 and dramatically reduce your chances of experiencing a catastrophic fire. Check details at this site.

Addendum: I am not advocating or advocating the practice of leaving a printer unattended. It’s just me anticipating that some folks will do it anyhow and offering assistance.

Does Formlabs have data on how many other printers have incinerated themselves?

Where did you get information to suggest that any Formlabs printers have incinerated themselves? I’ve been with FL since the Form1 was released. My printers are always plugged in and powered up. I’ve never even caught a hint of any odor to suggest the printer is overheating. And I don’t recall anyone logging in to this forum to complain that their printer caught fire.

I think the answer to your question is “zero” for Formlabs, and “why should they care?” if you’re asking about other manufacturers of 3D printers.

Regarding “Where did you get information to suggest…”, I imagine it’s just an attempt to drive up sales of accessories.

I am not aware of any pyrotechnics associated to Formlabs printers – or pretty much any other printer.

Hey folks, so when my printer heats up in the enclosure and none of the windows are open apart from the one sealed to exhaust fumes, the room can get a bit stuffy. My partner complained that she could smell wood and wiffs of paint fumes which I assume is the enclosure getting too warm and maybe the resin smell? She has a very strong sense of smell and to me it’s not entirely obvious. The enclosure is pretty airtight and does make a huge difference in smells and sound, though seems still not 100% fume proof.

Most likely, the problem of fire is in the current short-circuits in the electrical network (printers have nothing to do with it) or in violation of the operating rules provided by the manufacturer.