Keith, while I don’t work for FL, I do manage technical customer support for a large US tech company. Please forgive my bluntness, but your perspective on this is wrong.

It’s not a question of whether or not you or I are competent to use this feature (I sure think that I am). If FL enabled these features, without a doubt some people who are not competent to use them correctly would use them incorrectly and FL would have to provide support to those customers.

FL’s alternative is “invalidate the warranty” for anyone who uses the features. You can use it, but if you break it, tough luck for you. But I think this would result in even more customer support problems.

Like it or not, FL’s reasonings are valid. They’re a money making business. They can’t be giving away replacement machines to users who mess up the one they purchased by using Open Mode incorrectly. But those users would expect it. They have no choice in the matter but to decline to enable this for all, or open themselves up to warranty “burden” that could be quite expensive.

Randy, I definitely agree with your last statement and Keith I also understand your desire to have more freedom to configure the machine to work for your purpose. I have expressed similar desires on this forum. I believe this discussion would be better served to direct focus to get Formlabs to improve the design of the cartridge valve therefore eliminating the need for this discussion of workaround solutions. The fact that Formlabs is not currently admitting that they have an issue (correct me if I am wrong) is causing Form 2 owners to be nervous about losing there investment (see disaster thread). Formlabs could ease Form 2 owners minds if they would give us some information about the failure and what they are doing about it. This would not be an admission of fault for Formlabs. This is a new product and they have taken a large step in innovation. It is understandable that the printer many have an issue that needs additional work to resolve the failure.

I’m not sure there is an issue. We’re talking about letting Open mode use the wiper and heater and autofill.

But irrespective of that, your comments are definitely spot-on. This is exactly the way my customers expect me to behave with my products. The issue is considered “guilty until proven innocent”. I’m also expected to improve the quality/reliability of the product over time, even if it started out pretty good to begin with, I still take heat. The best way to deal with quality/reliability issues is to attack them head-on. Arguing that they don’t exist is at best a delaying measure (since failures continue to accumulate in spite of your protestations to the contrary), and when the truth becomes undeniable, you look like an a-hole for having fought so hard to argue against the ultimate reality.

Guys,
First the machine is not going to explode if FL gives the user more control. All we are talking about is spilling resin and FL could do better to mitigate problems should spills occur.
I can speak with firsthand knowledge of this having had two minor and one major spill.
First spill was all me as I was experimenting, as any curious person would. Cleaned it up and moved on.
Second was using bone stock, castable v01. and on my machine it will always spray over the lip of the tray when filling. This particular issue could be prevented with some minor design tweaks to the bite valve. Cleaned it up and moved on.
Third was by far the worst and also how I learned the most about the Form2.
Running bone stock again, Grey v02, started the job, walked away and when I returned to check up on the machine I found the bite valve swimming in the resin tray. The better part of a liter of resin had been released and overfilled the tray flooding the inside of the machine. The immediate problem was the leveling sensor was no longer reading correctly causing the job to pause.
After making sure FL was ok if I open the machine, I found, with no great surprise, resin covering the mainboard.
The other part that I found that was surprising was the previous two spills had also made it to the main board just not as significant of an amount.
Long story short after complete disassembly and a gallon of IPA it works again.

He is what I learned.
Spill containment protects the optics pretty well but nothing else, there is room for improvement.
Mainboard and microprocessor board are directly under the path spills will likely flow.
Conformal (may only be a solder mask) coating apparently does not protect liquid seeping under BGA chips. It took a lot of IPA and compressed air to remove the resin from these chips.
The electrical connections, are unprotected and also likely to be exposed to spills.
What really raised my eyebrow was the open frame power supply sitting under the front spill containment catch area with no shield to deflect spills if any occurred.

What would make the system even better.
Short of relocating electronics above the water line so to speak, Potting the PCBs or at the very least a conformal coating that prevents liquid ingress for all components.
Sealed power supply or at least guards to better prevent possible spilled liquid incursion.
Under the fill valve is a catch basin, routing liquid that falls into this basin outside the machine may have helped in my situation.

These improvements would go a long way to mitigating issues that could occur when giving the user control over their machine.

Edit: corrected typo. Level should have been leveling

Randy, I appreciate your bluntness. I’m used to people giving me the run around so to speak.

My perspective is in no way wrong though, just different. Hence the name perspective.

I also understand your customer service angle and applaud your ability to do that job.
I am not capable of doing it. Brain/mouth speed thing.

My real problem isn’t them not giving us a real open mode, they are the designers after all, but pretending like it is one.
They haven’t said, “No, it will cause warranty issues.” They just keep beating around the bush.

I would gladly accept full responsibility for errors caused by open mode control.
An easy way around the customer accepting responsibility and FL being able to convey the importance of the risk they may be taking. Would be to lock full open mode down unless a code was entered that would be giving by FL.
It is a common approach to this kind of problem.

I also appreciate the design upgrades that went into the Form 2. It works perfectly for what we make. The Form 1+, while and amazing machine, was just a PITA for us.

I really hope we do find common ground for the users that would love more from this machine.

They haven’t said, “No, it will cause warranty issues.” They just keep beating around the bush.

Keith, thanks for not taking my comment the wrong way.

I actually think someone from FL may well have said this very thing at some point. But I’m too lazy to go searching for a definitive reference.

I should make it clear that I also want “open mode” to be open. I believe I should be able to set a temperature, and set a wiper sweep rate and frequency. I know I’m competent to manage this properly, and I know if I screw it up I can’t go complaining to FL about it.

I’d be perfectly cool with it if FL had some kind of warranty limitation for Open Mode. Like “we warranty internal parts but not spill related issues if you use Open Mode” and then let me have at it.

No problem. I know how hard it is to not come across as an ahole when typing.
I also try to “really” read a comment and not what I just “think” it is saying.

I hadn’t seen the FL comment. I will have to look.

I agree wholeheartedly about the limited warranty.

I think, since they can’t really do design changes to the Form2, they will likely take these changes into consideration on a new iteration of the printer–I don’t know that they could adjust the design of the valve that would still be compatible with the Form2 so they might not be able to do anything other than software changes. For Form2, to try and fix the problems that people can get they might want to open up the ability to use the advanced features in Open Mode, maybe even customize the options if you want to turn off the wiper or whatever.

I hope they will develop a Bulk system, I will eventually be adding a few more printers to the arsenal and would love to feed 2 or 3 printers from one source. But not with that rubber valve. That would scare the heck out of me.

The bite valve is really pretty unsophisticated but cheap fluid engineering. They should have used a removable mini-pump and a load sensor to measure volume passed.

So, did anyone work out if you can buy replacement bite valves specifically for the form2, or if any third party ones are suitable?

Form 2 Cartridge worn out must replace! NO not this! General Discussion

Wow, if there was a way to defeat the usage sensor on the cartridge we’d be home free!

Very positive seal and they outlast Formlabs standard seal by a long way. When sealed its almost impossible to blow the valve open. Press the sides and its instantly open

I find the bite valve is one of the most reliable parts of the system, never had any problems with it.

Knock on the table, you must have an angel on you! We’ve had some nasty fails in the past… Even with new cartridges.

Easy to get replacements

Can second that. We’ve used some Chinese made ones, same size. However the cut was a bit too small so fixed that with a knife.

I purchased these and they arrived today. Did you cut the ones provided to fit the cartridges? As they are there is no way to use them.

The ones I bought from Amazon fitted the cartridge and worked without any need to modify them - The slit is not immediately obvious until you squeeze them, then it opens

The Chinese ones need to have the long tube cut a bit.

would you please post the Amazon link that you used? The ones I purchased have a tube (~1/4") attached to the actual bite valve with a tapered transition section. Two of the five have an incomplete cut in the bite section. I’m not using these for third party resins. We combine part cartridges of Formlabs resins (see my earlier post for how we do it).

If you look back at my earlier post, the image is a screen shot of the Amazon page that is for the valves I use - no mods required!! 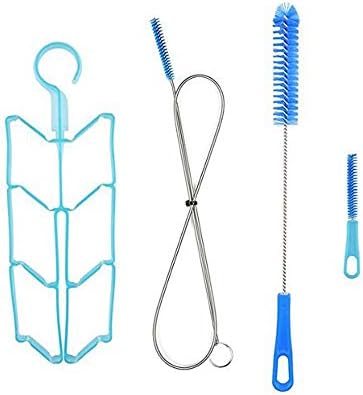