Hi all, I’m confused (and disappointed) with this one, wondering if anyone knows what’s going on before I try again. I’ve printed a fair amount on my machine since 2019, and this is the first time I’ve had such a failure…

BUT, 20 hours later, I come to my print, and it looks like this picture! Everything was perfect for the longest time, and suddenly the remaining layers appear malformed, and a few layers worth of durable resin are stuck to the resin tank film!

Visually, only one glaring thing comes to mind: the resin tank looks nearly empty!! When the wiper moves to the side and waits, resin doesn’t completely cover the entire resin tank.

What gives!? Isn’t the Form 3/3B supposed to auto-top off the resin tank as needed during the print? And if the cartridge is out of resin, shouldn’t it pause and warn me and I need to put a new resin cartridge in there?

I’m super confused and disappointed, not only have I wasted 20 hours and ~$50 worth of resin, but I think my resin tank is likely destroyed now that there is resin fused onto the film…

Any advice is appreciated! 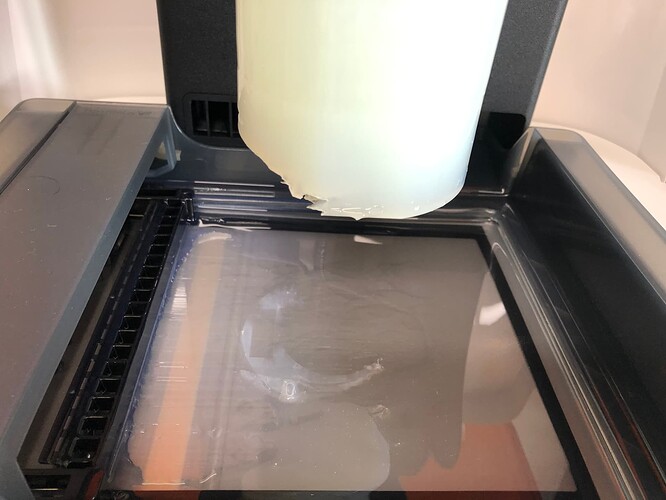 The plastic scraper thing that came with the printer can usually be used to remove resin stuck to the film, without damaging the film. You need to strain the resin in the tank through a filter or screen to remove any loose floating stuff left over from the failure. But if it’s not solidified, it can be recovered for reuse with no loss in its “resin-icity”.

What is it that you’re printing? Post a screengrab from PreForm showing it and how it’s oriented on the build plate.

I’m wondering if you have any internal voids that might have captured resin. I don’t know for sure, but I suspect the resin sensor only detects “full”, it’s not used to determine an actual level in order to know when to add more resin. The printer adds resin based on what it thinks it has used, or it just periodically tries to add more resin (again, not sure. Doesn’t really matter either way, though). So it gets to a point where it decides it needs to refill and it pours resin until the sensor says “full”. If all the resin drains out between fill cycles, the printer doesn’t know. So if your print captured a large amount of resin inside, the printer might not know that the resin was “lost”.

How old is the resin tank? How many prints have you run with it?

Print failures happen, it’s unavoidable. Not the end of the world, though, no worries.

I think there are instructions in the support area for dealing with a print failure.

Hey thank you so much for your reply!

Removing cured resin from the tank:

The scraper idea was great! I think I have been able to remove all the cured resin from the film, and since they came off in relatively large chunks, I was able to easily remove the chunks by hand.
I don’t have a strainer handy (do you have any recommendations? edit: i found this ), but I can’t see any small solidfied pieces, so hopefully it’s not too big of a deal.

I guess I didn’t realize how old this resin tank is! First fill date March 2021, 1.7L of resin used…lol! For some reason I thought this was a tank from June of this year…

Anyway, I had a successful print right before this one (significantly smaller objects), and upon re-inspection of my design, and Pre-Form, it still seems to me there was some sort of lack of resin causing the issue.

Design seems fine according to Pre-Form

There are no cups according to Pre-Form.
It’s a hollow Cylinder.
I had also created holes to prevent blowout in two areas.

I do suspect lack of resin was the issue…

When I saw the print wasn’t turning out the way I expected, I could visually see very little resin in the tank.

Interestingly, the area of the print that started failing the most is the part that was closer to the MIXER side, which makes sense to me because when the wiper would try to mix resin across the entire tank, there would tend to be little to no resin towards the mixer side.

Upon pulling the part off the build plate, I didn’t see any resin backed up inside any crevices…

The other thing is: my resin cartridge was empty. I recall visually seeing the printer successfully dispensing resin from the cartridge during the pre-print “filling” operation, which means it was able to fill the resin tank to the correct amount.

I’m not sure if the Form 3 is mean to auto-re-fill during a print.

From my understanding, the tank typically holds around 250mL+ of resin, so for my 346mL print it makes sense the resin tank would have to refill during the print.

But if the resink cartridge was empty by the time the printer tried re-filling…I wonder if the printer did not recognize that it wasn’t able to refill. (glitch?)

Hoping someone can clarify how re-filling mid-print works? 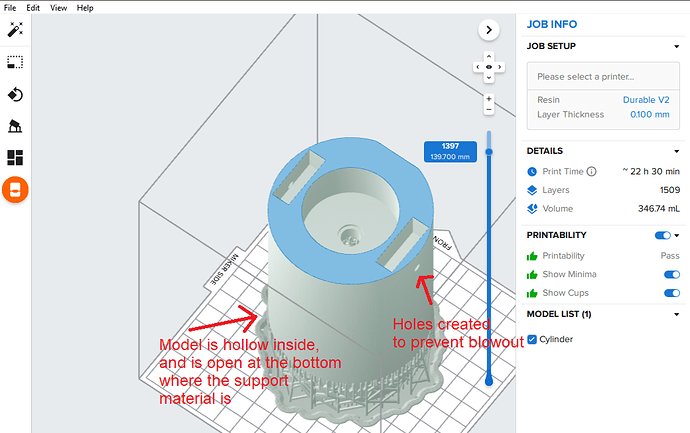 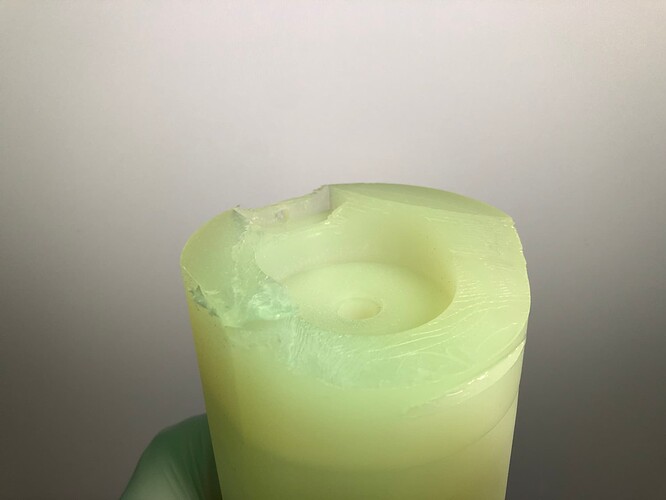 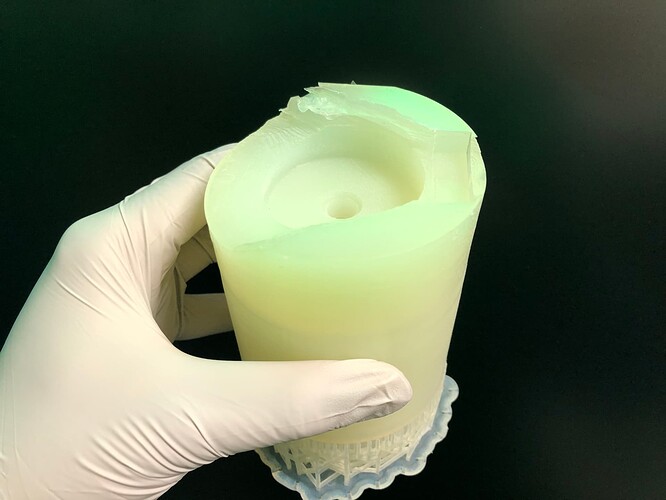 Thank you for reaching out about this! I’m sorry to hear about the failure you encountered, and I’d be glad to share some insight into this.

Thank you @Jesse_K , the links were very helpful! I went ahead and purchased some filters based on the advice in that article.

I will also take a look at the diagnosic logs.

I did reach out to the support team as well, so here is an update in case it helps anyone else that comes by this thread in the future:

It looks like in this case, the cartridge did not have enough resin in it to complete the print. The reason the tank ran dry was that the errors which notify you that there is not enough resin in the cartridge to complete the print (the PreForm estimate can be wrong), and the error that the cartridge was empty, were not displayed. I know this because I can see in your logs that the printer was trying to dispense resin but was unable to do so, but I cannot see any evidence that you received an error. We will be looking into this issue for you.

So, it’s reassuring that the printer is meant to continuously refill resin during the print. I suspect my cartridge ran empty and either due to an anomaly or maybe something about the level sensing, it didn’t throw an error that the resin never got refilled sufficiently. I will go ahead and replace the tank and start with a new Durable Resin cartridge and hopefully it will be fine.