Hi All,
I’m looking to purchase a 3L and only have a few days to decide on my purchase before the special offer ends 31st Dec.
I’ve had a few sample prints supplied from the distributor printed on the Form 3 which on first impression look great. The parts being a watch body and rotating bezel that sits inside the body.
The parts were drawn with a 0.2mm tolerance to allow assembly but the body printed 0.5mm smaller (a 60mm diameter part) making assembly impossible. The body is also warped across the top surface by 0.2mm.
The parts were printed in the same orientation at the same time in 2 different resins and parts exhibit the same issue.
Would this be acceptable tolerance from this printer?
Any feedback to help with my decision would be much appreciated.

My FL3 prints great tolerances as I just printed a piece with rotating part. The distances between rotating elements is 0.02 inches.

You do get warping, but over a part as small as a watch I would consider 0.5mm on the high side. I regularly do 0.2mm clearances for assemblies.

That doesn’t necessarily mean my part comes out within 0.2mm of design spec, but it does usually achieve the desired fit. For larger contact areas I increase the “play” accordingly.

I’ve found large parts with long, flat areas are typically most susceptible to warping - sometimes more than a millimeter; here’s a recent print:

It’s about 21cm long x 5cm wide with 3mm wall thickness. You can see the corners of the two pieces curl away from each other. In this case my contingency is to sand them flat. Other tricks can help - like reducing the contact area to a thin lip (one reason coffee cups don’t have flat bottoms).

Here’s another case of warping from a few years back, with an earlier version of Tough resin that wasn’t as good as today’s. That was a rather thick part.

As I understand it, when a layer of resin cures it contracts, making its edges want to curl away from the build platform. As layers stack, the effect accumulates. A diagram and heat map here illustrate this for thermoplastics. It’s not the same for SLA polymers but I’m told the effect is analogous.

Generally, adding supports and printing at a steeper angle can help reduce warping. Here’s an assembly I made with several snap-fit parts not far off the scale you’re using. Since the accuracy depends to some extent on part geometry and orientation, it did take some trial-and-error to get the tolerances right. After some practice with SLA, you’ll eventually develop a feel for this and be able to get snug yet operational fits on your first or second go.

For uniform geometries, angling along multiple axes is also important. Take a look at this lid, which forms part of that assembly I referenced (click for all the images): 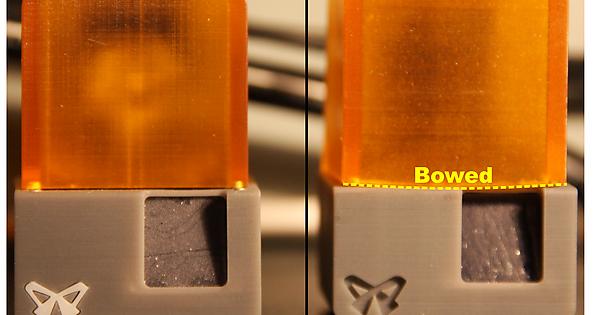 You can see even when I angled the part in one axis, it didn’t eliminate the bowing on the bottom surface. A Formling explained it’s likely because the forces near the perimeter of each layer slice still combined in an overall direction biased toward the unwanted bend. It remained no matter how many supports I added to that surface.

In that case, I didn’t want the extra support marks that would have come from another axis of tilt. Which brings us to another technique that can help if your geometry allows (e.g. not many overhangs): printing a part directly on the build platform. The portion which cures against the base is drawn with the X/Y accuracy of your printer (which should be pretty good, and for some models like the Form 2 can be calibrated). And as additional layers are formed, the aluminum plate provides reinforcement that keeps that surface and nearby geometry from warping. Of course this isn’t suitable for all types of prints, and comes with other caveats (which I talk about a bit here).

Resin choice can also be a significant factor. I would expect more warping as you move from Rigid --> Standard --> Tough --> Durable.

Post-processing can influence warping, too - especially for very thin parts. Here’s a thread where I elaborate on that some more. The advice here basically amounts to not leaving your thin parts in IPA for too long, and ensuring even UV exposure during post-curing.

Worst case if you have a consistent warp that you can’t solve any other way, you may be able to counteract the effect by designing a correction into your part. It’s tricky, but I’ve done it before in one simple case.

People here with more “machinist” experience than me have pointed out you’ll never get as good tolerances from any sort of additive manufacturing (like SLA) as you would from a machined part. The very first print I did when I got my Form 1 back in the Kickstarter days was a series of concentric rings and bores to explore tolerancing for moving parts. I was disappointed circles didn’t come out round, and felt the printers were more suited to artistic models than engineering stuff. But the machines have gotten much better since then. If you search around you can see lots of moving parts folks have created.

I can see how a watch bezel is more challenging than a simple hinge as it has a more contact area and would be more sensitive to any slight elongation or twisting of the parts (overall or locally). But with some tweaking (and perhaps a bit of sanding), you should be able to produce a body and bezel that rotate smoothly. Formlabs support is pretty knowledgeable, too, and may be able to share advice specific to your part geometry.

If you suspect your printer isn’t performing as well as it should, I’d be happy to share some calibration models I’ve used on my Formlabs printers (like these little cubes and height checks) and compare results with you. I have a Form 2 and 3 here, and a 3L on the way. The Formlabs optical test might also be worth running as a basic check.

I hope some of this information helps and you get more acceptable results on your next attempt!

To add onto the great responses above, from my experience, the tolerances you can achieve vary greatly with print orientation, resin type, geometry and curing.

Print orientation hugely affects this because orientation influences a) cross sectional area and thus peel forces, and b) direction of internal stresses when polymerized.

Resin type is also a factor, as you can achieve tighter tolerance with stiffer materials (eg. Rigid 10K will probably give you the best tolerances, while Durable the worst).

I’ve also found that depending on your geometry, parts can deform during washing or curing. Specifically, really thin parts can come out with great accuracy in the “green” state, but after curing and washing, come out really poor. For parts like this, it’s probably best to cure without heat or with a lower temperature that isn’t so close to the HDT.

I typically quote +/-0.25mm as my accuracy tolerances. I’ve found the machine is extremely repeatable, which is great because you can dial in specific prints if you’re making a lot of them…but there have been times when I’ve seen worse than +/-0.25mm on parts while sometimes I see way better. It’s not very easy to characterize.

I imagine that expensive SLA machines (eg. 3D Sytems) that don’t have any peel forces are able to achieve much tighter tolerances across a wider range of geometries & orientations.