Normal for tough (v1) to be REALLY thick?

Put a cartridge of tough into my Form2 for the first time.

It’s taking ages to fill.
In fact, it initially wasn’t even beginning to flow for minutes, so i stopped it, inspected the cartridge and the bite valve (squeezed it manually to verify, just in case it got stuck or wasn’t punctured). After reinserting the cartridge, it started flowing after a while, but still - the consistency is like very thick (cold) honey.

At this rate, i’d say it’ll take half an hour to fill up.

In fact, it’s taking so long to fill up the tank, that it timed out:

PS: The stench is nasty. It stinks like the very first revisions of MakerJuice from 3+ years ago.

I’ve put two cartridges in to my Form2 so far. A Tough1 cartridge (plus another liter from a bottle, poured in to that cartridge) and I just put a Tough2 cartridge (and new resin tank) on.

In both cases, the first print on the empty tank failed to fill the tank to the necessary level and I got the same error box you did. In both cases I hit “Try Again” and it squirted a little more resin in to the tank, decided it was full, and started the print.

I don’t think Tough is much thicker than a resin like Clear. I think the tank fill algorithm is tuned just a little too conservatively and when starting with an empty tank, it gives up on filling before it ought to.

My theory is, the tank fill algorithm has the same timeout regardless of the resin used, and Tough is just viscous enough it times out.

I’ve noticed it when cleaning up too - i usually swipe the build platform after part removal and drip any leftover resin back in the tank. This is way harder to do with the Tough resin, at least my sample.

In other news - it’s much much floppier than i’ve expected. It’s essentially useless for any part thinner than, say, 5mm, unless you need it very flexible. I’ve printed a silo for the Apple Pencil as a test print - with 3mm worth of wall, it’s still easily bendable and even somewhat squishable by hand.

If i were to print a part like the one in this promo shot:

… it’d be as floppy as a rubber gasket.
That’s after sitting outside in the (semi-cloudy) sun for 3-4 hours now.

PS: Yes, i know “tough” does not mean “hard” nor am i expecting it to. I’m commenting on the elastic modulus, which seems entirely too high, at least with my sample.

Yes, I agree. I’ve had difficulty getting good prints from thin walls. They get distorted by the peeling operation and as you’ve observed the resin never really gets “hard”. Witness these two pictures of the same part bent in opposite directions. It returned to flat after I let it sit for a while. Maybe 4mm thick?

I’m thinking of laminating Tough and one of the standard resins, a suggestion made to me by FormLabs tech support… 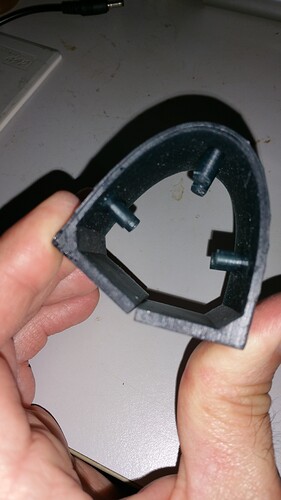 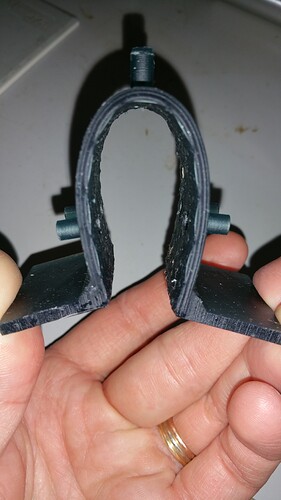