I bought a bottle of MakerJuice SF grey about 3 months ago, and yesterday I decided to give it a try. I installed a brand vat, and filled it about half way with the MakerJuice, after shaking the bottle really well for about 30 seconds.

The first print attempt was a complete failure. The only thing that printed was the base, and the supports, up to about where the model was supposed to start. The base was also very brittle. The setting I use for this first test was Grey FLGPGR01.

Of course there was a nice blob of cured resin at the bottom of the vat, and while removing it I noticed pigment streaks in the resin, so I spent about 5 minutes re-mixing the resin in the vat, using the spatula, until it looked nice and even, then tried the same print again. I set the resin setting to FLGPGR02 this time, and hit start.

This time, the model printed all the way, except it’s still a failure. Some of the parts are cracked, others are separated, and others printed like a blob. The plastic is very brittle, an the surface has a gritty feel to it.

Here are a couple of images showing the grey print, next to the same model printed using some old expired F100G resin. 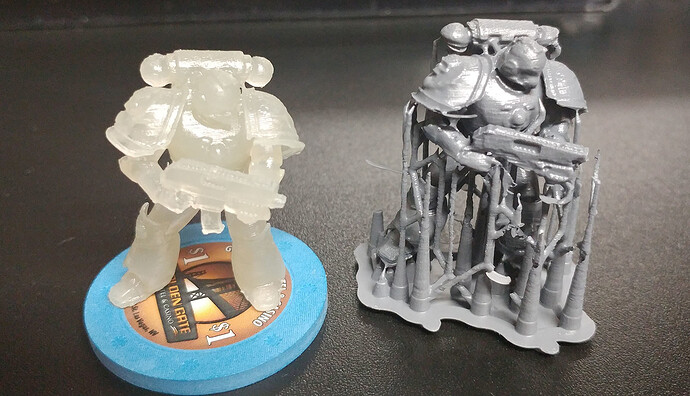 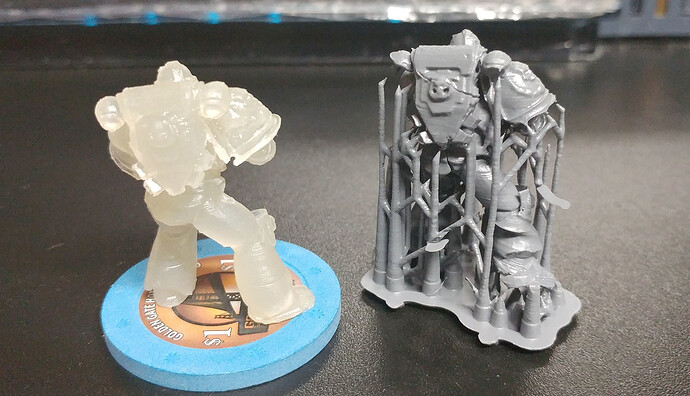 So, is there some special way of printing with Maker Juice? What am I missing?

Try shaking the resin for more like 10 minutes. Hold the bottle upside down, and shake it by moving it in a vertically oriented oval whose plane is perpendicular to your shoulders (kinda like playing a marimba). Every couple of minutes, rotate the bottle 90 degrees (still upside down). This splashing motion will impinge the thicker stuff at the bottom the bottle (now up), knocking it down to be integrated with the thinner stuff. That’s what you’re trying to accomplish.

Plus, hollow out your model if possible.

10 minutes sounds excessive. Never had to do that with the Formlabs resin.

But what’s to loose. What about the resin currently in the vat? Should I pour it back into the bottle?

As for the model being hollow, as you can see from the casino chip, thrown in for reference, these are very small (about 38mm in height. If I were to hollow it out, the walls would end up being only 1mm, and I found from previous experinece that walls less than 2mm tend to end up with holes.

Never used maker juice, but I routinely print at 1.5mm wall thickness with formlabs and photocentric resins. If I was printing that figure I might print it in sections as well, rather than as a single piece. Is the model available to download as I have a client who want a large version printed?

yeah, it might be, but at least you can rule out mixing as an issue

What about the resin currently in the vat?

If it’s not too much, probably just leave it and really mix in the new stuff.

as you can see from the casino chip, thrown in for reference

Yeah, I had no idea what that was or it’s scale actually. I don’t gamble, and have never set foot in a casino.

…found from previous experinece that walls less than 2mm tend to end up with holes.

I normally print walls of my prototypes from 1mm all the way down to recently 0.12mm. Admittedly, the 0.12 walls were only 0.5mm high, but still - thinner than 2mm walls are definitely doable without issues.

Well, I cleaned the vat, mixed the resin, maybe not 10 minutes, but more than 5-6 to be sure. Poured it into the vat, and spent the next 5 minutes mixing it in to remove most of the bubbles. No pigment streaks whatsoever.

Loaded my model, which I hollowed out to 1.25mm, generated the supports and clicked PRINT. 1 hour later I was greeted by this beauty.

Well, I think I’m done with MakerJuice. I’ll just bite the bullet and pay for something that works.

JasonSpiller, wanted to see if you were able to upload photos of some prints done with the photocentric resin. I’ve been looking at their resin wanting to try it, I just haven’t had the time.

I did just find this thread with seems a little misleading by the name: Photocentric3D retailer in the USA?

This guy was printed at 1.5mm thick with photocentic firm grey.

Great looking part, looks like I’ll have to try some of the photocentic firm. Have you tried other colors yet?

No, but I am working with Photocentric at the moment and testing their new formulas for firm and hard grey, and firm and hard clear. Or I will be when my printer comes back from repair!

I’ve tried makerjuice and it cures too quickly, even with the material preset with the lowest exposure time, they just haven’t gotten it to cure at the level of the Formlabs resin.

I am testing black makerjuice SF for FORM 1+ and it is really annoying.
All prints came out like the one on the photo. Base prints perfectly, but from one moment on (presumably from the moment when printer exits early phase for base printing) the print fails like it would be cut away and it sticks to the resin tank.

What you see on the photo is the base of a Formlabs’s butterfly slightly downsized so the model should not be the issue.

The only print that has not been completely “cut away” was a butterfly where I exaggerate with supports (point size .9mm and density 1.4. That way, TWO supports survived the printing and holding the part. You can imagine the quality

I have done A LOT of stirring and shaking. The resin tank is not completely new, but a few great prints were printed with FL black resin just before using it for MJ so it probably doesn’t have such a bad influence on printing.

I have no more ideas what to try. Looking for some magical solutions. Any ideas? 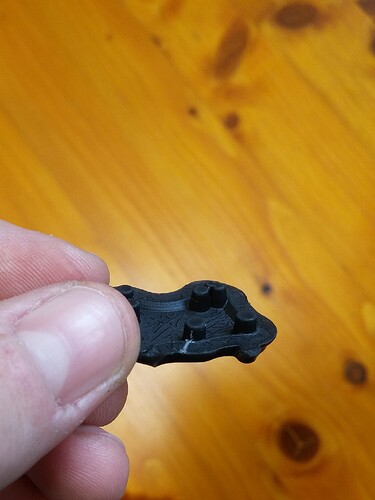 You could try to sand the build plate to give it more grip, it works with the Wax cast from maker juice.

It looks like that is the exact transition height from double (or more depending on the resin) exposure to single exposure. It looks like it is time for you to start using OpenFL and creating a resin profile that works with that resin (or tell MakerJuice to create a custom profile for you).