I print a lot of small items and PreForm has a tendency to place supports very close to the parts. In fact it ruins quite a few. The point is further up but it passes so close to details that it causes them to be messed up.

Just some way to move the support columns out away from the part being printed is all.

Just to clarify, this is something that manually editing supports does not fix, correct?

Somewhere on this forum this has been asked for before. We would need to be able to not only edit the touch points but the columns that are generated. I have run into a few parts that got ruined due to the supports generating too close to the model. Maybe being able to edit them or angle them so the support doesn’t grow straight up right next to the model.

Do you have an example? Perhaps the algorithm just needs tweaking in a corner case?

On this particular print, ran two at the same time, the problem is where the red circles are. The cross support between two verticals is too close to the details causing them to wick to the cross support. All the rest of the flange detail with the bolts prints real nice. Just these two areas are an issue. This isn’t the only way it happens. On some the vertical gets too close to details as it passes to a connection point higher. Same results or it is so close it actually attached to the print and when cut off the print breaks at this point. Here is a photo of the PreForm screen. I’ll get a photo of the prints later. I’ve already tried cleaning them up some but the detail there is lost and after a 7+ hour run that’s a real let down. 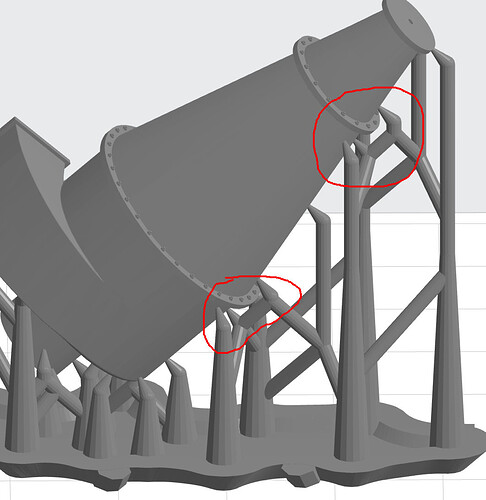 Correct. Fact is you don’t see this problem until AFTER the printing is done. In the photo the cross braces look fine but in the actual printing they are way too close. As I said, some vertical supports pass way too close to the print and will actually attach to the print making it almost impossible to remove them. They leave big scars or cause large holes when you try to cut them loose. I’ve had such close supports break off parts of the print making it useless.

Here is a photo of the printing. You can see damage to both flanges. Also you can see the detain that should be there. I had already started to try and clean this up so on removal from the supports there is a lot more resin present at these points.
Printed piece is 2" long by 3/4" in diameter. Two were printed at the same time. 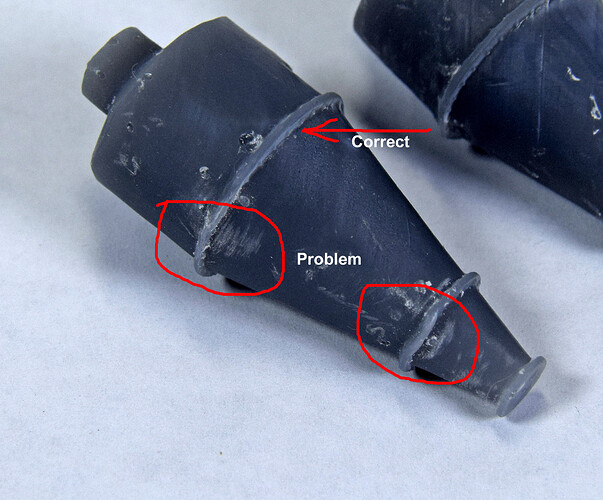 As I said, some vertical supports pass way too close to the print and will actually attach to the print making it almost impossible to remove them. They leave big scars or cause large holes when you try to cut them loos. I’ve had such close supports break off parts of the print making

Rather than interference between the diagonal beams and the part, it looks to me like the issue is that PreForm is not supporting the small flanges you have circled, leading to local failure. If you add a support to the lowest point on each of those flanges, I think you’ll be much more pleased with the result.

Yeah, those parts aren’t supported which is why they end up that way

Your issue seems to have more to do with those unsupported rings on the model.

But be that said, I can remember (fondly) a version of the software that use to let you edit individual supports and rotate the actual cones/touchpoints, to fine tune the point of contact. I like the point of contact editing now - its better - but length and size of a touchpoint should be editable on a point by point basis - not just the global setting. And having the piers disappear on you, and not being editable/positionable is frustrating.

Which would be made much easier if Preform would let you export the file with the generated supports.

under edit supports you can change the diameter of the connecting point at any point in the editing. So I have heavy in some places and small in others.

I see, thank you. That is useful. Must have snuck by me in an update. I does seem you have to destroy an existing point and replace it with a new size, but at least you can preview the size as you place it. I would like to be able to see the cone and pier positions without having to commit edits but still nice. That only leaves being able to re position the piers.

I would also suggest moving your point size down to 0.44 or 0.40 for the supports as i have found the default thickness for the supports WAY to thick leading to scarring when they are cut away. These tiny 0.44 connection points still hold the part firm but break away much cleaner in my experience.

I had an issue today on some human figure prints I was test printing on the Form1+. In PreForm it didn’t look like the supports were that close to the head of the figure but when taken out of the printer they were so close that they actually welded to the head. When cut away they snapped the head off the figure. The size of the print was 1:87 scale. I did save a few of the prints at that scale.

The 1:48 scale, the largest of three I tested, had the least amount of support and cleaned up real good.
The 1:64 scale had more supports but not as many as the smallest 1:87 scale. I had to work to get these supports free but the figure came out clean.

I used .40 mm connection points and minimal supports on all three.

Be careful with point size for the tough and flexible resins. I’ve had very good results with the small .4 points with standard resin gray though.

I’ve experienced this issue as well. The supports for this tab are in contact with the body of the part: 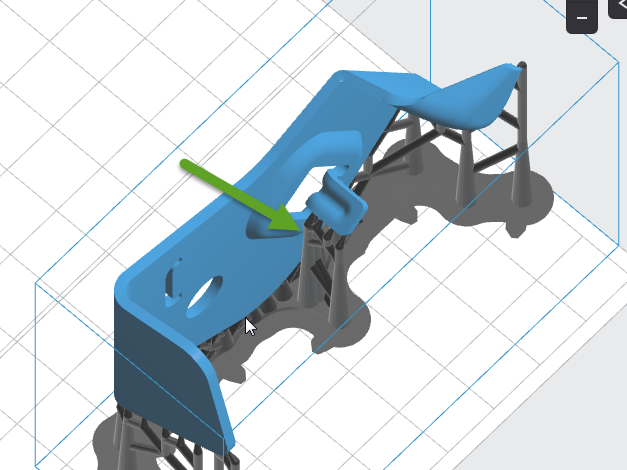 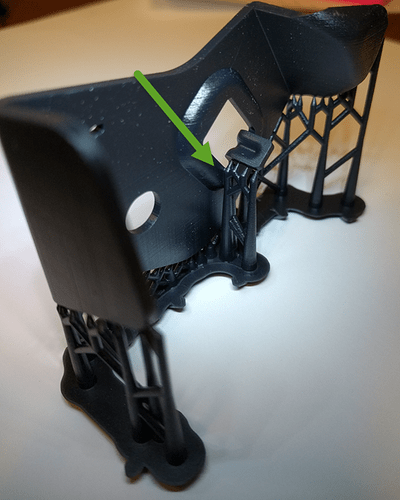 Pasted image522×652 388 KB
I cut the end of the print off to try and show it better, but my phone is crap at focusing close: 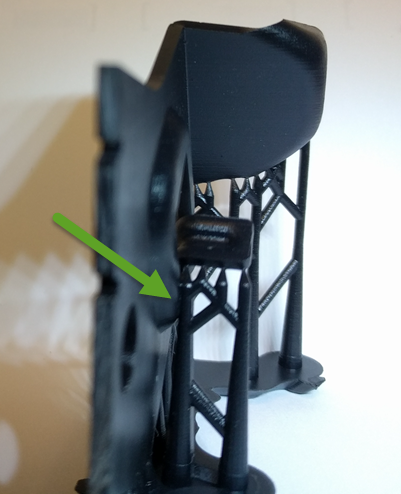 Same batch, supports removed. You can see the last portion of the support is solidly bonded to my finished part: 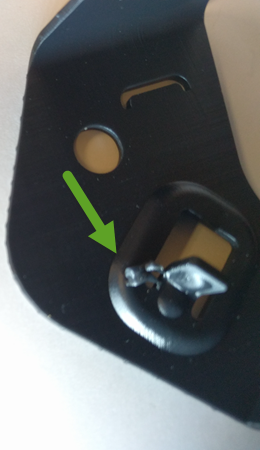 Now I understand that I should edit the points and get it farther away, but theres no reason for PreForm to generate supports that ruin my part. If the supports are within .005" or something, I should at least get a warning.

Thanks for the example. I agree, from the looks of it, it shouldn’t touch your model like that. (The only places it should touch your model are supports (of course) and when it has to start a support on the model because there isn’t room to get from a point that needs support around the model down to the base.) Would you be willing to send me the .form file as a test case?

It’s not a case that the support is actually touching the other parts, it’s that due to the diffusion of the laser in the resin if the support is close enough to another surface it can cure to it a bit.