i’m having a strange problem in my isopropyl vat. Mostly in the first bath.

My vat is turning white and there is some strange goo on the bottom. What is happening here and is anyone else having this problem??

I am only printing in black and tough resin btw so in the past my isopropyl was allways turning black. 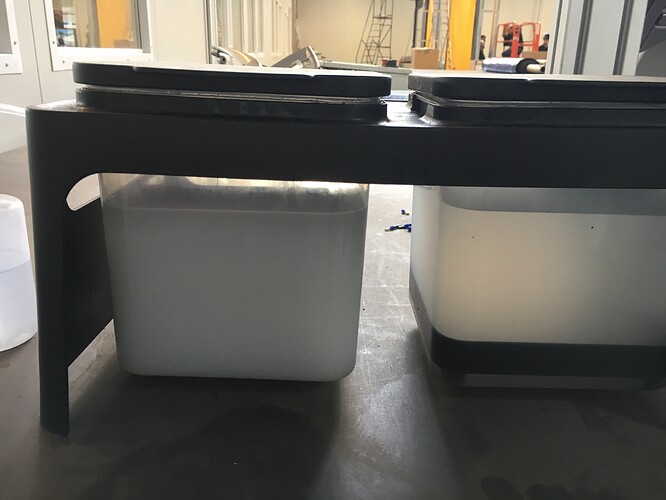 This is the propanol i am using

Too much resin in the IPA. This won’t clean out well. Dump it out into a disposable container and set that out in the sun to evaporate before putting in the trash.
Try and clean the tank as best you can then add fresh IPA.

Thats just it. This is quite new IPA and the “whithening” happens by itself. This is not the result of washed of resin. Btw if it was it would be black from all the black resin we use.

I’ve never had that happen with IPA by itself. What brand are you using? I just by mine at the pharmacy in pint bottles.

The function of the IPA is to dissolve excess resin from your parts so it will become saturated over time. If exposed to enough light, some of the resin will cure and precipitate out of the solution. This is the goo you’re seeing at the bottom. When you notice your IPA becoming dark or opaque, that’s usually a good indicator that it should be changed.

Yeah, so the IPA makes the printed parts swell. Not really a problem in the general sense, such as if you’re just washing your parts or accidentally leave them in the IPA for a few hours. But, if the residue washes off and polymerizes in the IPA, that’ll swell too, and since it’s never taken out, it will swell as much as it can. That’s the white goo settling out in the bottom of the container. I’ve had this happen a few times and that’s the best explanation I can figure out. There’s no real solution for it, maybe just let your parts drip back into the tray for a while beforehand? If you have pockets of uncured resin in your parts that could be the culpret too, let those drain back into the tray. Regardless, it seems to hamper the washing power of the IPA, and so you might want to replace it.

Can you leave the containers in the sun (closed to minimize evaporation) to see if the white material cures to itself? I had something like this happen, but leaving it in the sun cleaned up the IPA, the residue hardened into material that could then be filtered out with a fine paint filter.

This will help to prolong the lifetime of your IPA but it does still need to be eventually replaced. Some users have taken it a bit further and placed a UV nail salon directly atop the IPA container (probably wouldn’t recommend this).

I wouldn’t recommend leaving the UV nail salon hardware on top. My concern might be unfounded, but I am not sure if it was designed to function with IPA and water condensation. It could simply short circuit or maybe, cause bigger problems?? I’d recommend placing a sheet of glass between the UV Salon thing the IPA.

I’ve never tried this nor am I sure I’d recommend it, but I think the idea has been to make sure that the IPA container is covered. Otherwise, I’d have similar concerns regarding IPA evaporating and interfering with the UV Salon.