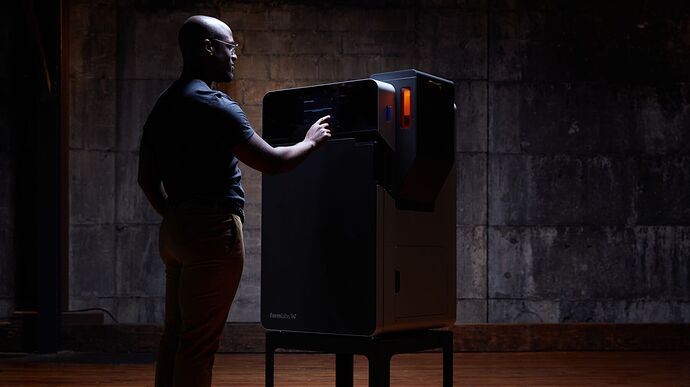 When Formlabs began shipping the Fuse 1 selective laser sintering (SLS) printer, we knew that it would change the 3D printing landscape forever. Since 2020, Formlabs has sold more SLS printers than anyone else. Now, two years later, we’ve taken feedback from our thousands of users, and continued to build on the incredible success of the Fuse 1 by introducing the high-efficiency Fuse 1+ 30W SLS printer with print speeds up to two times faster than the previous generation.

Upgrades to the system include:

With these upgrades Fuse 1+ 30W users can increase their throughput, unlock new, high-performance materials, and deliver parts faster than ever.

Please check out our Fuse 1+ 30W Launch Blog to get a complete breakdown and explanation of all the new features available on this printer!

Still have questions about the Fuse 1+ 30W? Don’t hesitate to drop them below in this thread and we’ll be sure to get you some answers!

Will there be an upgrade path for owners of the original Fuse 1?

Hey Jeremy,
We have not planned an upgrade path for existing users. Fuse 1 remains a reliable, performant SLS 3D printer for functional prototyping and small batch production, and we will keep servicing it and offering the broadest range of materials possible on the Fuse 1 in the future. If you are interested in higher throughput or in our new Nylon 11 CF Powder, you should consider adding Fuse 1+ 30W to your operation, alongside your Fuse 1.

For our particular use case, the fact we were sold the Fuse 1, just weeks prior to the launch of this Fuse 1+, with not even an upgrade path forward…is unacceptable. (we actually received it two weeks prior to announcement)

In our discussions with your sales team, we spent months discussing, on the fence, trying to make a decision between the Fuse 1 and the announcement of the much faster, Sinterit Lisa X (30w laser, Nitrogen…that can print Nylon CF).

We were told Nylon GF and Nylon CF were in the horizon by Formlabs and we believed the support and product would be a better option, sticking to a company within the United States.

We were told, that the original Fuse 1 would be able to run not only Nylon GF but that same Nylon CF material in the future, but it would probably be another 6-12 months out from launch till we’d see the CF. This was during the final sales call getting us to pull the trigger.

After dealing with a faulty Sift replacement and now the issues we are having successfully printing the newly released Nylon 12 GF consistently (see other posts) it is looking extremely difficult to realistically get a return on investment running production parts on the original Fuse 1 platform, as it appears we may have to go well above a 50% refresh rate on Nylon 12 GF.

If we had the Fuse 1 for a year, successfully ripping out parts, even months…I could understand your upgrade response to be “Just pull the trigger and buy another one if the Fuse 1+ looks to meet your needs” “Get two!”

In our case that statement is just totally ridiculous and unacceptable.

The Fuse 1+ is looking to be a great machine and exactly what we originally had hoped for but from this experience, I couldn’t see justifying it….

Sorry, but all that said, we just can’t get over the fact you’d sell and deliver us a machine, a week prior to such a significant upgrade that appears would have met our actual needs/efforts better for what we’re trying to do.

We are doing some innovative things with innovative groups. Having discussed all that and our desire to push/maximize production run volumes in higher end materials in SLS…

Anyway done rambling… In an attempt to upgrade…not sure there are many buyers for a three week old Fuse 1 on Craigslist….but Like “New” condition