Hi all,
I’m new and would like to thank the community for its kind help.
I’m trying to print without raft but can’t find any way to do so in Preform 2.20.
There isn’t any “Raft type” settings or I just can’t find them (see image).
Am I doing something wrong and could someone please point me in the right direction ?

Another question is : how can I modify Preform’s language ? I’d like it to be in english (it’s in french ATM). 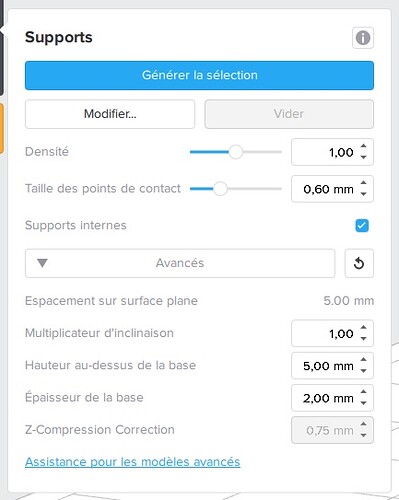 To print without a raft in the earlier versions you simply leave the model on the build platform and don’t generate supports. If you need supports and really don’t want a raft then you’ll need to use other software to generate them as part of your model (Formware is good for this).

Thanks very much for your answer.
As I still need supports but without a raft, I will have to find another slicer.
Formware as you mention is probably good but not free.

By the way I found out how to launch Preform in english language.

One again thanks for your kind answer !

Hi again,
this sounds strange because I found some Preform 2.20 related documents that are talking about a “On Build Platform” feature to do just that : print without a raft but with supports.
One such document can be found here (see on page 20) : https://bitraf.no/w/images/d/d0/EN-Using_PreForm_2.20_with_Form_1%2B.pdf
But I can’t find this feature/button on my Preform 2.20 release.

Could someone with a Form1+ and Preform 2.20 tell me if they do have this feature/button ?

Thanks to all of you.

The “On Build Platform” feature I’m talking about has been introduced on release 2.18.0 as stated here : https://support.formlabs.com/s/article/Older-preform-releases?language=fr#2018

And it’s also described in this post : Improvements in Printing on build platform

So I downloaded and installed V2.18.0 instead.
But I still don’t see that “On Build Platform” feature/button.

I’d like to know if other users have this same problem or if they do have this option.
If someone has this option available, could you please tell me wich version you are using ?

If I choose “Form2” as my printer then this feature appears on the “Supports” window.
But it isn’t available if I choose Form1 or Form1+.
Which means that the description found here for V2.18.0 and Form1 / Form1+ isn’t correct : https://support.formlabs.com/s/article/Older-preform-releases?language=fr#2018
And the other link to a pdf document that I posted previously also seems to be wrong when describing this feature for Form1+.

If I understand correctly you want to print a part directly on the base on a Form 1+ but still have Preform generate a support lattice (without any raft).

I don’t think that’s supported. As you identified, when the Form 1+ is selected as your printer Preform does not show the “On Build Platform” option. Your problem is summed up by this picture: 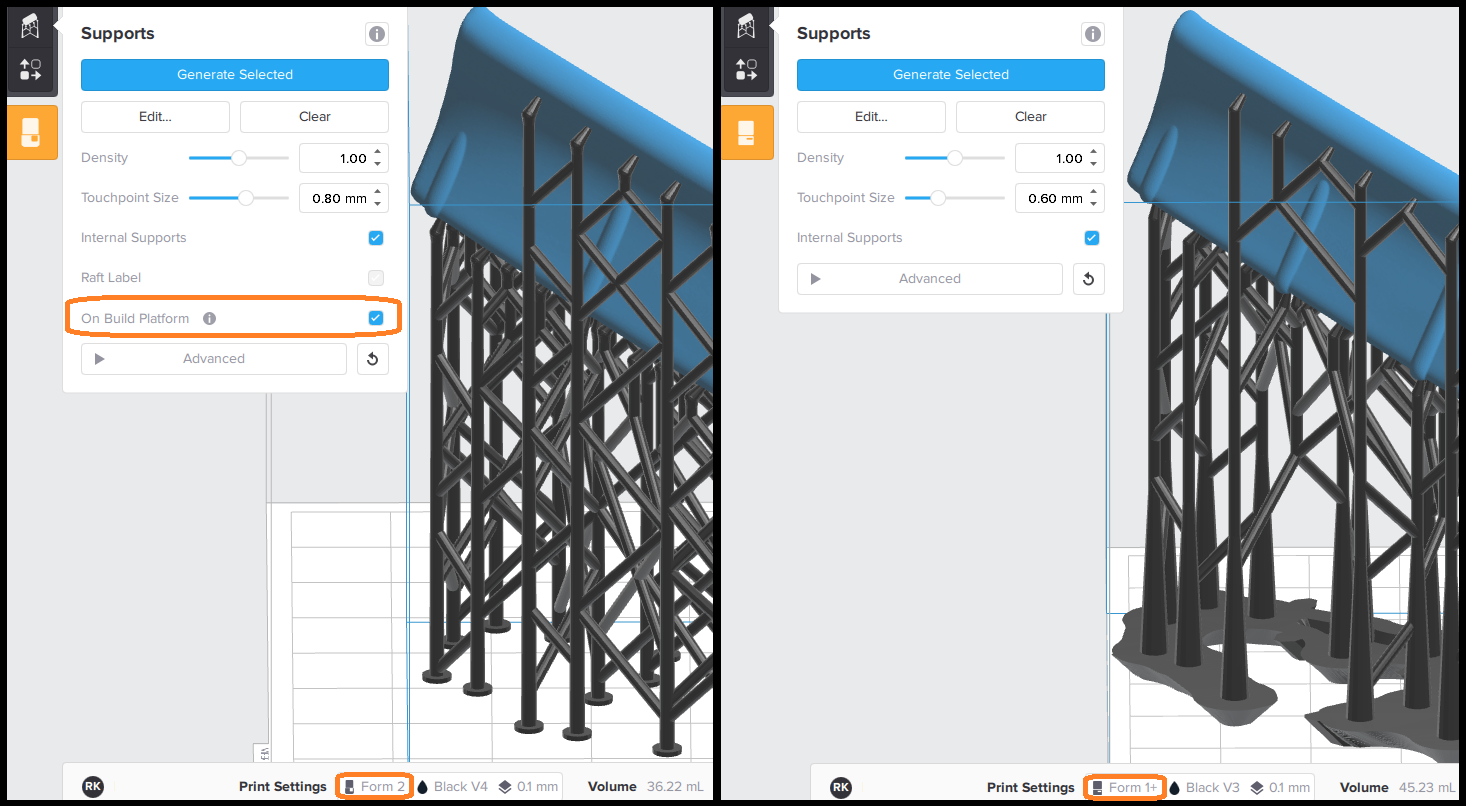 The different printers have slightly different support generation algorithms and my guess is Formlabs didn’t want to backport the new feature to the older algorithm (or perhaps they didn’t feel confident the smaller footprint of direct-on-base supports would provide enough surface area on the Form 1+ for reliable adhesion).

However, if you’re really intent on doing this, you can exploit a “bug” in older versions of Preform that allows you to swap resin and printer profiles while leaving the existing support structure intact.

When you open a .form file in Preform version 2.13.1 or below, it blindly maintains whatever printer and resin were previously selected. I was able to: 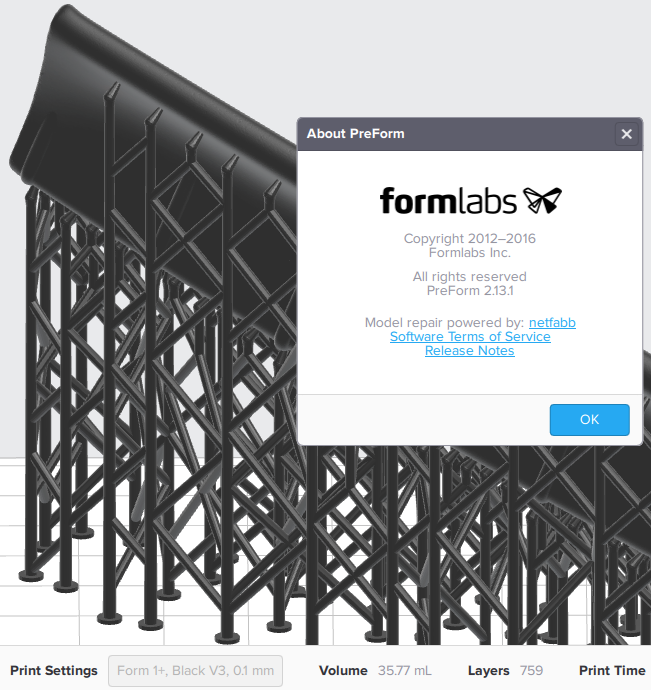 Unfortunately 2.13.1 is no longer available on the Older PreForm releases page (right now 2.16.0 seems the earliest one there). I had a copy lying around, and uploaded it here if you want to experiment: PreForm 2.13.1 for Windows

Be forewarned the method is imperfect.

I noticed the file sometimes gets loaded missing the mini-rafts at the bottom of the on-base supports: 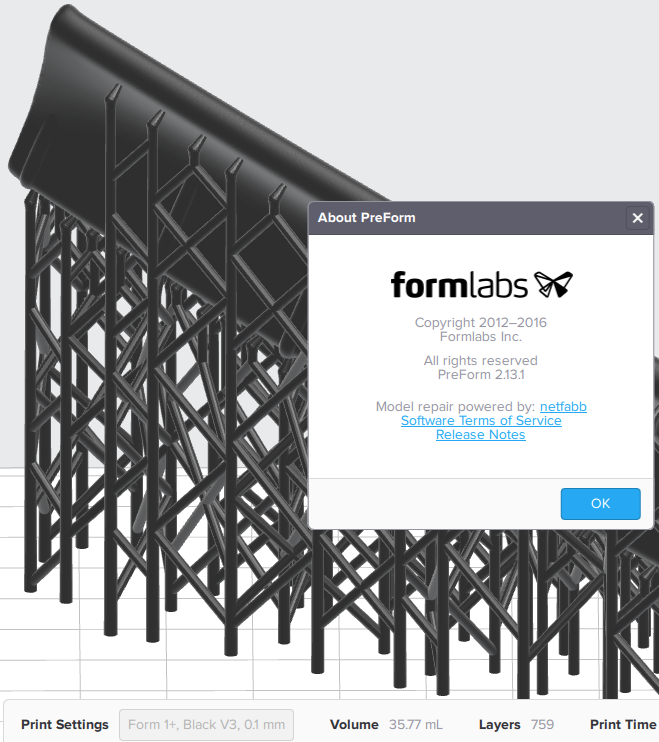 I couldn’t figure out a rhyme or reason. If it happens, I suggest you close Preform and keep trying again until it comes in correctly (at one point during testing it took me half a dozen attempts).

Also keep in mind you have to select the Form 1+ printer before opening the file. If you try to change the profile afterward, Preform will force you to clear the support structure and start again:

Version 2.13.1 is old, and doesn’t support some resin types. It also can’t open .form files that were saved under the latest versions.

Finally, and most important, I’m not sure how much mileage you’ll get taking a lattice designed for the Form 2 and printing it on the Form 1+.

Here’s some discussion from around the time they fixed the bug: Option to keep supports intact when changing printer/resin in Preform

Option to keep supports intact when changing printer/resin in Preform

Although the supports for the two printers look similar, there are actually some important differences. Because of the differences in the way the two printers perform the peel, I don’t think we could really qualify Form 1+ supports on a Form 2, or vice versa. Sorry about that.

The details of the support generation is tuned to the printer type and trying to use supports generated for a different printer type really really likely to get you into trouble.

Until the “Import Touchpoints” feature was available, the trick above was the only way you could change resins without having to redo all your touchpoints. Starting with version 2.14.0 they introduced the option to maintain the existing touchpoints, and made it so Preform always forces you to regenerate the support structure: 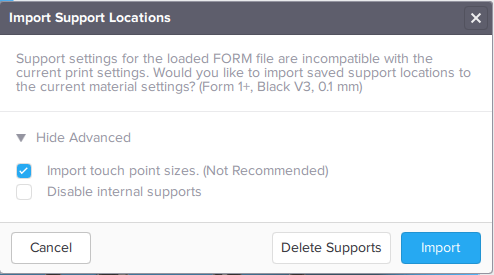 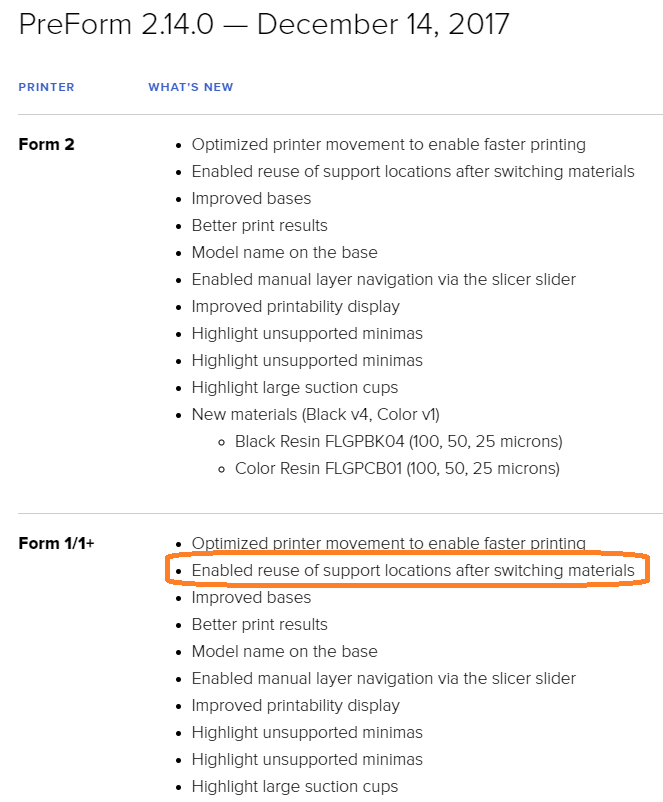 As far as I know there’s no way to generate a Form 1+ tuned lattice with mini-rafts.

The hack I described is worth a shot, but I still expect you’d get more reliable results just printing on traditional rafts (or using different software, such as Formware, to create the supports as part of your STL model).

Thanks Rkagerer!
This is a very detailed and complete answer with a workaround that I’m gonna try and will let you know the result.
As another workaround I was thinking on generating physical supports with Meshmixer and ask Preform to print it “as is” (without raft / supports).

If others are interested in downloading older releases of Preform (including V2.13.1) I have found this repository where you can do so : https://drive.google.com/drive/folders/1k1C6QDv6CbEVsz6t-EJ6ZldKd1dDOsOs
But thanks for sharing your V2.13.1.

As I said I’m gonna try your workaround and will tell you if it worked.

A BIG thank you Rkagerer!

Use a tool like Meshmixer to generate the supports that are needed. Import the part into Preform and do not generate any supports (because they are already there).