Hoping someone can help, my lovely little printer has, overnight, developed a large 2in crack in the left front bottom corner.

I’ve always looked after it, no spills or heavy handed-ness, does anyone know the cost to replace please, or how one replaces it?

Can anyone also advise what I might have inadvertently done to cause this, gutted - as it’s treated with kid gloves

I have one just like it. Except mine is about 3 inches long. goes from front left corner at approx 45 degrees up and back pointing to top back left corner. You probably did nothing wrong. Even if you drop the lid it soft closes or at least mine does. Looks like a stress crack that developed from mfg. Bet they have seen more than a few. I have not addressed it to FL, lazy and then they will send me a new one and then I have to install. Waiting for it to get worse. 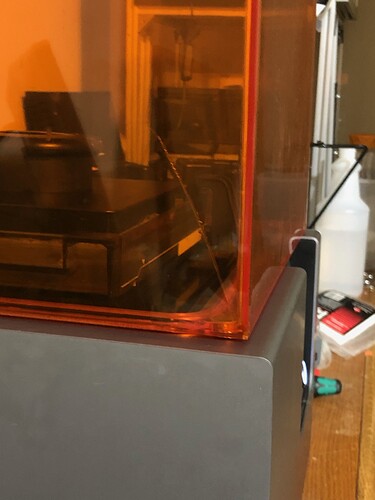 Same here (as in photo) with one (of two) Form2 and I’ve seen the exact same crack in one more. I was told it was due to resin contamination or direct sunlight. Don’t think is something to be concerned with, other than beauty reasons…or am I wrong?

Shouldn’t be an issue if no external source of UV light around. As for sunlight or resin, BS. Mine has never seen a ray of sunlight. Never had a drop of resin, IPA or never been closed hard, twisted or anything else. MFG defect.

Both my Form 2 printers have cracked Orange cases. That’s the way it goes. Splashes of hot resin from stuck pieces in the resin tray will cause this. I have a new cover in a carton but I’m not going to use it until I absolutely have to.

Sorry, no. I got mine as a warranted replacement on my first F2. This was caused by a resin splash from some issue with the printer. My second unit has just as many cracks. But those don’t cause any issues with printing or results. I’ll run them until they totally break apart.

My to Form 2’s sit with the Form Wash between them. I don’t have a lot of room here. Everything is in what should be our living room and also the dining room (that’s the wife’s office and inventory shelving. Open wall between.

Anyway, the units can get splashed with IPA if I’m not careful. Why spend money if you don’t need to. Use the broken lid as long as you can and keep the replacement in the shipping box until you absolutely need it.

So sorry to hear you’re having some issues with your Cover!

Generally the advice here has been good. As long as there’s no light entering or escaping the printer cracks are absolutely nothing to worry about.

That being said, if you have concerns please don’t hesitate to reach out to our support team at the link below and we’d be more than happy to look into things with you!

Stop-drill it. Use a 3mm drill, SHARP, and carefully drill a hole a few mm beyond the visible end of the crack. DO NOT PRESS too hard or the crack will run on. The crack will eventually extend into your drilled hole, the stress will get dissipated around the hole, and it should stop the crack extending any further… Should being the operative word!

Mine’s gone exactly the same way (see photo). This definitely looks like a design or manufacturing fault as it’s identical to the photo that @spiderx1 posted. I’d also considered drilling a ‘stop’ hole like @wunwinglow suggested but I’m a bit reluctant at the moment. I’ve attempted to weld it back together with some DCM so I’ll see how it goes. 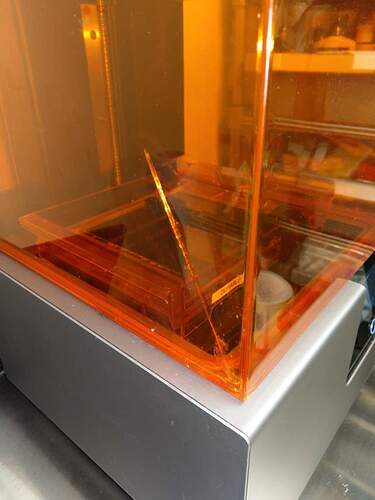 The plastic is over stressed some how. be it from the material curing or the particular design. Also could be the process to cast them as it is a rather large casting or injection molding. From what I can see it’s not built up.