Here is the thing, they are printing the exact same thing, at the exact orientation, the only difference is the resin version.
How can there be a time difference of almost 4 hours, and also more layers? More layers would make it bigger

Did you take the exact same .form file and convert it to Clear V4, or did you re-import the STL file and made a new orientation based on the original ?

Clear V2 should be identical to Clear V4. Here’s a list of the different resins and their versions :

it is the exact same file. Here is what i did. after uploading the file to the 2 printers with the v2 resin, i then clicked on the print settings chose the 3rd printer and changed the resin version. So other than the resin version, its the same

That is interesting on that link. It says v2 and v4 can be mixed. I had to change the vat

using 2.13.1. downgraded last week due to going back to an older firmware because we were printing too big and it cost us £1000s

Oh, you’re right. Half of the speedup I was thinking of did go into 2.13.1, but enabling the coarse support layers feature for Clear V4 didn’t go in until 2.14.0. That’s why you’re seeing the number of layers change. That will make a big difference in print times if you’re using .05 or .025.

When we introduce a new resin, even one that’s very similar to an existing one, it can take a while to fully qualify some of these performance features, so they don’t always make it into the first PreForm release.

Question because vendors changed to version 04 resin can I use tank that has 02 in it and version 04 for my container.

It doesn’t look like it.
Things don’t seem to be making much sense with formlabs at the moment.
We opened brand new tanks with v2 resin, barely used any resin, but now they have been paired, We now can’t use v4 resin with a tank that has had v2. Yet v2 and v4 resins can be mixed…
So effectively we have thrown away £180

That’s not true. if you start a V4 print with a tank registered with V2 resin and a V4 cartridge, your printer will warn you that the tank is of the wrong type. You can however override this warning (on the printer’s touchscreen) and continue the print, the printer will then gradually refill the used V2 resin with the V4 cartridge and since you know they are mixable it’s not a problem.

I agree that’s it’s a mess though, but there is no or almost no situation where you really loose hardware/money because of this.

Yes you can, just start the print and override the warning regarding the resin version on the printer. The tank will then be registered with V4 resin and you will not get the warning next time.

How do you override it on the screen?
We get the ‘cartridge warning’ on the screen, and the only option there is, is the Abort Print option 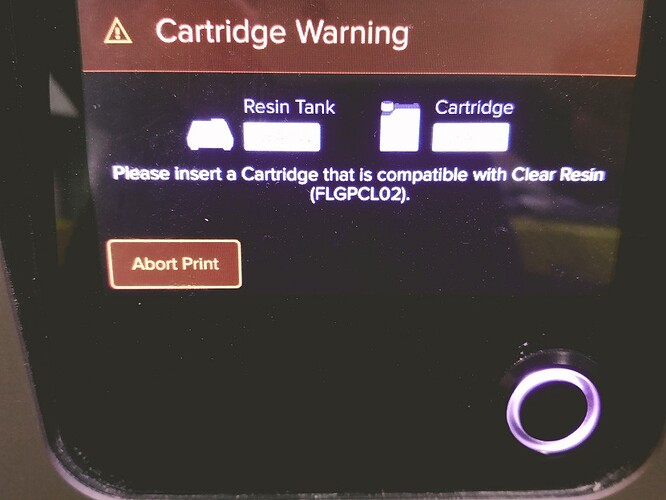 You have to set your file in preform to be in V4, insert a v4 cartridge and your V2 tank. If the file that is in the printer is in V2 it won’t print with cartridge from another version (your can override the content of the tank, but not the cartridge). At least I think that’s whats causing the problem, if your have everything setup as I describe I suggest hailing Frew to sort the situation out because that’s not normal.

Late to the game here - but I have noticed the same issues w 02 to 04 - and in my opinion 04 must have different laser settings and doesn’t seem to cure as hard during a print as 02. I do a lot of repeat print jobs and had an 02 set which actually prints flat off the bed without supports - printed it dozens of times without issue in 02. once 04 was released, half the pieces would not stick to the bed (same build plate, same z offset settings, new resin tank). Then, if I leave the same clear 04 tank in the form2, and pour the new 04 cartridge into an empty 02 cartridge, and use the old 02 saved form file, it’s back to perfect printing. Luckily I have plenty of empty 02 cartridges to do this and figure any issues will eventually be resolved but I figured that would help anyone worrying that you can’t treat 04 as 02 - it works fine don’t worry about it - if anything it prints better with 02 laser profile