Beyond the Form 2 (bigger builds?)

We love the Form 2.
We have 2 systems running nearly constantly and have no complaints, except one. We want to print bigger.

Being a relative novice to 3D printing, after doing some general online searching i am none-the-wiser as where to go next.
Im sure in the future there will be a formlabs option but right now we could really do with a build platform that was at least double the size of the Form 2.

Anyone have any suggestions of a system that might give the performance of the Form 2 but allow the build of bigger parts?

For a lot more money, there are much larger printers to be had. Many are SLS though, not SLA. Though there’s nothing wrong with SLS. If there was one priced at the Form2 price, I’d own one of them, too.

The Form2 is about the most volume for the least money in a professional-grade SLA printer.

Designing parts broken up in to smaller components that fit the printer can actually be a more efficient way to print. At the very least, prints sometimes fail and printers sometimes fail. If you’re printing smaller parts on many printers you only lose the part or printer that fails. If you’re printing larger parts in fewer (bigger) printers, it costs you more throughput when a failure occurs.

Also, if you break a part in to 10 pieces and print on 10 printers in parallel, it takes 1/10th of the time it would take to print the same thing on a single 10x larger printer.

You can check at Ilios with the ilios ray, better than form2 but formlabs get their own materials and that could make a difference for technical parts as flexible or tough… 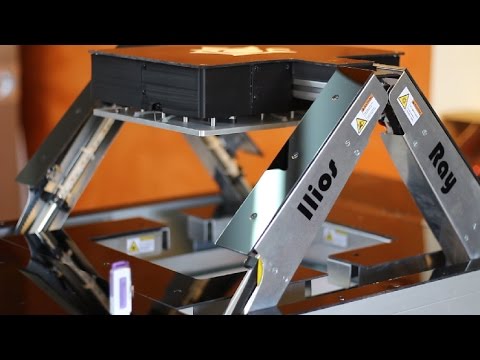 Ilios high resolution SLA 3D printers are an affordable and innovative 3D printing systems with abundance of features and a user friendly as well as safe 3D printing process.

It’s certainly bigger than the Form2. I am not at all sure I’d say it’s “better”. It looks more like an advanced hobbyist machine than a commercial printer. It’s described as a machine for someone who wants to experiment. People who buy 3D printers to support their revenue stream generally don’t want to experiment. They’re looking for a reliable solution with a short learning curve from a supplier with an established track record.

I think the “scissor jack” build platform looks cool, though I’m not sure I agree it’s that good of an idea vs. a ball screw. It’s got a lot more moving parts. More parts always means higher failure rate.

It doesn’t appear to have an enclosed build area. Why don’t they think they need a cover? I don’t know about their development lab, but there’s plenty of dust where my printer lives. I wouldn’t want my print open to the environment, fresh prints are sticky. My prints would end up coming out “hairy”. As it is, I’m surprised I haven’t pulled a Form2 print out that had dog hair sticking out of it. My dog’s hair gets everywhere.

Cool looking machine but I’m not sure if it’s real competition to the F2.
They claim to have automated curing after printing. How?! The resin is not washed off after printing so you will be curing drops as well, reducing accuracy and detail.

I think if your looking for bigger you might want to look at DLP printers, they can have bigger build volumes…

Look at the Gizmo printers, they have good feedback!

There comes a point where the accuracy and build volume of the 3D systems and Stratysis machines come into play.

And for the people that think Formlabs resins are expensive have a look at the resin pricing for 3D systems.

Used machines are starting to dip into the $15000 range with fairly good resolution.

SLA requires that the height of the machine scales at least proportionally with the XY area. The Form 2 optimizes for build volume and overall size of the machine.

SLA parts, especially those produced with our materials, can be merged together very effectively. Cyanoacrylate based glues form a strong bond or if you want homogeneous material properties throughout your part, you can use a bit of resin and cure it with a UV laser to bond parts together. You should check out our blog post on making things larger than your printer’s build volume where one of our engineers made a full size R2D2.

The current build volume is pretty fantastic for this type of printer, since DLP printers lose quality at the larger build volumes and the Form2 uses a laser so it has high quality at all sizes.

I think at some point if they really wanted a larger build volume they could make a printer with multiple lasers/galvo systems which could also improve printing speed. But since most people are printing fairly small objects that’s not likely to be a priority.

Yes but used 3D Systems machines are also a mine field I’ve heard. I’ve been searching for a large volume SLA solutions for months and the most I’ve come up with is the Solidator 2. Anyone else? Also as mentioned above larger volume fails are costly. However none of these costs compare to how much is costs to have a professional outfit print the same model for you. What would cost us 1L approx. $149 from Formlabs you would pay close to $3000 for that part to be printed. What about large volume FDM with dissolvable resins like the Ultimaker 3?

And Uniz (the company behind the Slash) is working on even bigger one, the zSLTV with 521 x 293 x 600 mm, no price yet.
But it’s LCD (using a screen with uv light, not laser) so XY precision might be a bit lower than Formlabs. But still good certainly.

Any others anyone else is aware of?

With that amount of information on the website, no printed parts and very tiny video with mostly renders… I’d be very careful in investing.

Me too,
First videos shows a real frame at least (not just 3d renderings).
As I’m living in the country it’s developped, I’ll try to plan a visit to their office, will let you know.

Do note that it is not much different than a photocentric3D printer. They already have 17" printers and are testing bigger ones.

Yes, photocentric is also a key player, already working on that for some times I think. Not that much info on their printers (reviews,…)…

Similar to powder bed DMLS (Direct Metal Laser Sintering) the size of these machines is somewhat constrained by the architecture of the machine (and the same goes for any stereo lithography machine that utilizes a resin tray). For a minimum/nominal height of resin in the tray the minimum total volume of resin that has to be maintained in the tray will increase with width times depth (so length squared). So in the case of doubling the print area the resin volume in the tray would increase by 4x. In addition there will be physical constraints on aspect ratio of the print volume (you wouldn’t see a 3" wide by 3" deep by 24" high build volume for example). I’m not saying Formlabs have found the optimimum build volume geometry but you can see how the resin volume (and cost) to keep the resin tank at a nominal fill level will increase significantly as the build area increases. The machines physical size will also grow significantly as the build volume increases due to needing more resin storage volume and more room for the mechanical systems. At ~$200-$300 a liter I suspect Formlabs would price themselves out of the consumer market if these machines didn’t fit on a desk and/or require $1000 in resin to start a print.

Thanks for your feedback, this is all helpful.
The problem we find ourselves in results from finding the Form 2 so useful for our prototyping efforts, that we are spending ~£4k a month on services to print our larger parts.
Having explored a wide variety of systems we have decided that the only real option to future proof our efforts is something like the RPS Neos 800. At ~£350k and a hell of a resin tank fill cost that is not a cheap solution. Though it does roughly work out as £6k a month on a hire purchase deal over 5 yrs.
It seems crazy to me that we are finding ourselves moving from a £4k printer to a £350k printer with no reasonable options in between.
We explored a number of systems ranging from £80-160k but in terms of build volume these wouldnt cover all of our projects and result in still requiring 3rd party printers which at that Capex would make the purchase a bit pointless.