I have put in a similar request before that was added to PreForm…YAY! The navigator “ball” is pretty cool.

COLOR AXES: However, there needs to be some enhancements to axes and orientation in PreForm. There are pretty much industry standards using red, green, and blue for axes.

ORIENTATION FEEDBACK: Without this color axis feedback, the Orientation button is extremely difficult, and can only be used through trial and error. It doesn’t matter what orientation I bring my model in, the select base and orientation button just doesn’t make sense or work with any predictability. Perhaps adding some color to these buttons and have them relate to actual directions might make it work better? Or using arrows to show direction of rotation on color coded axes? 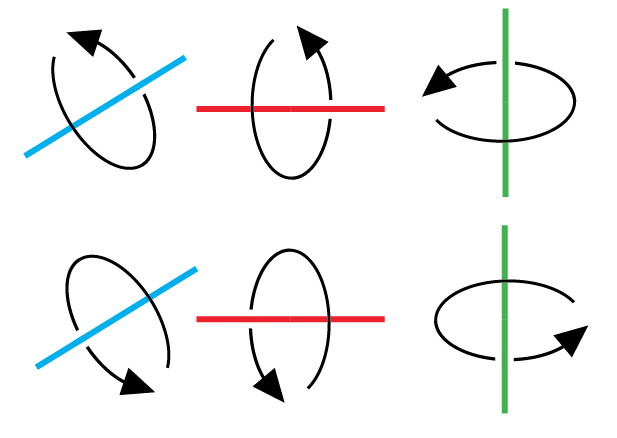 An example is below. I brought this model in from Moment of Inspiration (MOI). Looking at the orientation panel, I would think that the first button in the second row would mean that I’m choosing the back surface as my base. However, the resulting orientation is shown second. There is no rhyme or reason to this, and it is so frustrating. Could the colors on these buttons somehow be related to the axes? Or the orientation ball? Maybe the outer circles of the ball or new inner spokes be red, green, and blue? An example shown below… 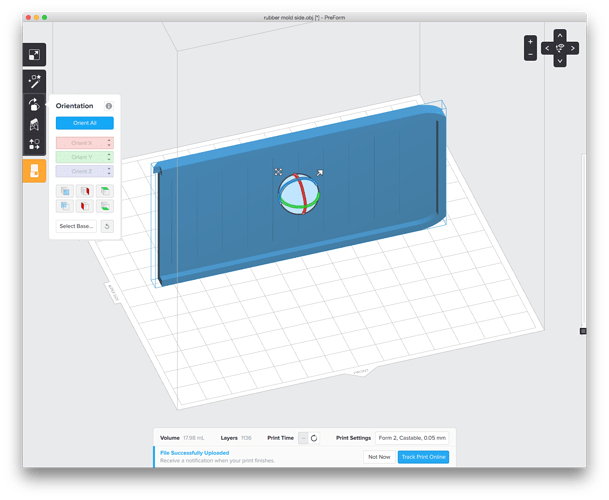 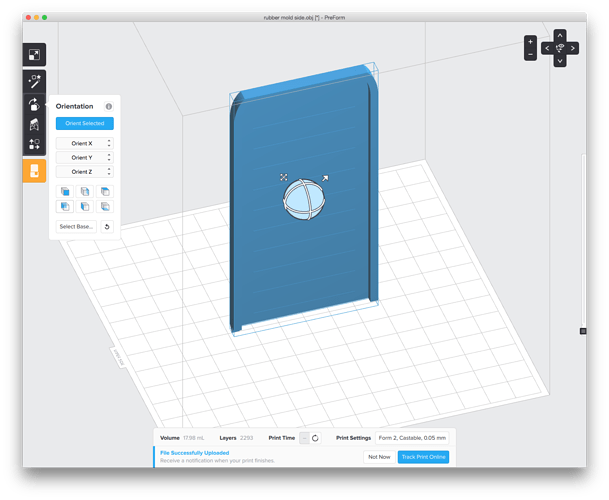 SNAP ON ROTATE: Also, the snap feature usually accessed in every other graphic program at standard rotations is pretty essential. I look forward to the addition to this feature.

RIGHT CLICK FOR ORIENTATION OPTIONS: I would love to see a right-click function that would allow me to rotate the object “clockwise on base,” or “rotate left”. Currently, I have to guess and use trial and error on the Orientation buttons, guess on the “Orient X, Y, Z” angles (which don’t ever relate to the X, Y, and Z axes), or try and eyeball it with the navigation ball because there is no snap function. I ALWAYS have to rotate objects 90°, so that would be a nice shortcut.

SELECT BASE: I have also tried using the “select base” feature, but I don’t know if it’s something with my normals on my model, but it doesn’t always work correctly. The arrow is all over the place. Perhaps an enhancement that would take an average of the polygons around where I clicked?

WIPER SIDE/FRONT: Wiper side doesn’t really make sense. I know when my wiper is parked, it’s always on the RIGHT, not the left where it appears now. I would suggest adding the pour spout as a reference, although I’m sure that this is the way it is before PreForm is used with a Form 1 that doesn’t have a pour spout? But if the program is smart enough to know what resin you’re using, I’m guessing it would be a minor change to add better feedback about which is the “front of the printer” and maybe even a gray shadow of the wiper to make it more clear?

TRACKING WHERE YOU’VE PRINTED: So the prints are rotated around the tank so you don’t overuse one are. PreForm tries to put the prints next to the wiper side every time and I have to move them.

You guys have done a fantastic job with PreForm so far, and are extremely responsive, so I’m sure you’re already thinking about some of these! Thanks so much!

I always wanted a viewport in Preform that reflected the part in relation to the tank. This would logically make more sense when orientating the parts. I had requested better numeric entry where the parts initial import orientation and size is retained so when you enter something like 30 on x and want to change it your new entry would be based on the original orientation and not be zeroed out.
Also requested that the user can unlock constraints on parts proportion so we can change the size or scale on an axis by axis basis (allow to stretch or squash).

Many others requested tracking or heatmaps on tank usage. I could see where FL would be reluctant because it would require tank tracking in the software as well as it may or may not be accurate. A good example is some parts can be repeatedly printed in the same region with little or near little fogging and others just beat the hell out of the tank. This all depends on many factors such as parts orientation, layer thickness, resin viscosity, resin type etc. and would require visual inspection to confirm. Ideally allows a user to mark a bad spot on the tank in relation to the software would be handy and could serve as a similar purpose.

Maybe adding grid options to the software so users can fill them in with a click of the mouse to mark the printed area and possibly add additional clicking on those areas to create a user generated heat map?

I’m confused too. This is a great idea. After 3 years I still haven’t seen it implemented. Every other CAD and slicing software I use has a clear indication of what the X, Y and Z directions are, and use the right hand rule - thumb in positive direction of an axis, fingers are positive rotation. If I want to rotate a part 10 degrees about an axis what direction is that? It’s trial and error. Even a simple axis system Icon on one corner of the PreForm build volume would suffice. This would seem to be an easy enhancement to implement. 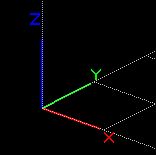 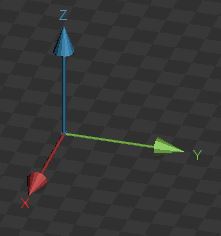