All about Durable Resin

Hi all!
Recently bought some Durable resin, and have just completed my first print. Just wanted to know if any of you have had experience with both the printing and finishing processes. UV curing for example?

Thanks!
If you’re interested I have a gallery of other prints here: https://www.grahamdesigned.com/

I’ve played with it a bit so far, but not a ton.

I can say that it prints very accurately. My first parts tried, were very small mechanical parts with both snaps and a living hinge. They weren’t my parts, but a colleagues. The living hinge was very thin and small only 0.005" thick, and didn’t have enough length IMHO to function well. All the prints printed very well… even the hinge. But the first prints i broke when removing the supports (broke the hinge). The second set made it to post curing, using the prescribed time and temp… and the material transformed. Post curing is essential for material properties. The hinges (remember poorly designed and wicked small) performed for 10-15 cycles.

Very impressive actually. There are few materials out there that can do living hinges at all.

My next playing will be a membrane keypad prototype. A dome button panel attached via VHB with tactile buttons beneath, to prototype a traditional membrane keypad. Also a zip-tie like strap and mechanism. I’d love to have some larger scale projects for it, but everything to date is very small or very thin, or very detailed. So far, so good.

One of the jobs i ran was creating and printing a modified zip-tie. Which came out with all the accuracy you could ever want, while being very flexible.
However it definitely is still just a prototype, and i wouldn’t be comfortable using practically.

So far I’ve been making bumpers and and spare tire racks for 1/10 scale rc trucks. 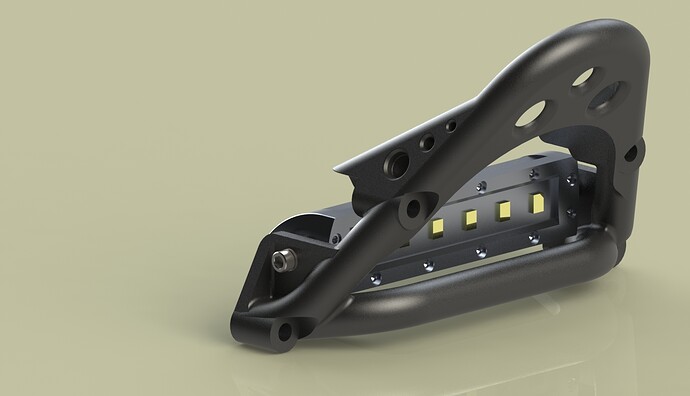 Good to know! I presume that the pawl was the week spot. Given the low modulus compared to Nylon…

Your parts look great! Our post-curing guide is updated with optimal cure settings for Durable. Print setup guidelines are the same as those for the rest of our materials. As a suggestion, so long as your parts aren’t particularly long and/or thin, it’s often easiest to remove supports before post-curing. Supports can be pulled off relatively easily prior to post-curing but become more challenging afterwards. That said, it’s sometimes necessary to leave support structures on to combat warping on certain parts during post-curing.

I did notice a small amount of warping on the zip-tie project i was doing. Is the best way to combat this more supports?
Would appreciate any suggestions, thanks.

It’s most commonly an issue for long flat sections oriented near parallel to the x or y axis. Supports will help to give a part scaffolding during post-curing after which it shouldn’t warp further.

I have noticed some sensitivity/softening, from the isopropyl. I’ve had some very thin parts turn to goo in the first bath within 10-minutes.

I’d recommend the same protocol with the alcohol as for High Temp. In and out, Less is more… and just use a soft brush to mechanically clean the parts after a short dip… then a quick rinse in tub #2.

I have just learned a very important step in the printing process using the durable resin. I do not have a lot of parts that require the durable resin, so the bottle has been sitting on the shelf for some time. I did my normal “shaking” of the resin before printing. The part did not print at ALL. I mean nothing!! I had the idea that the resin might have separated. It did!! I took a steel rod and vigorously stirred the resin while it was in the container, capped it, and then shook it some more. I then printed the same part as before and it came out pristine. The label on the Tough resin should read “REALLY shake before using”.

What sort of environment was the resin stored in? Temperature for example.