Ability to get notified via email when there's a firmware update

I have a Form 3. I’ve been keeping an eye out for firmware updates since FL has said that they’re still dialing in the parameters on it. I tend to only notice them when I happen to log on to the forums and someone else has pointed it out. I’d love to get an email when there’s a new firmware or preform release so I can update and try it out. It’d be fine if it were opt-in so you don’t spam all your customers.

I would prefer an email from FL for new preform or firmware releases. Your idea can work for the time being, thanks!

Love the idea with Trackly.io but it doesn’t deem to work for me. I tried both with the complete link as well as without the laguage selection at the end but it doesn’t seem to pick up on changes. How is it for you? What adress do you use?

Hmm, looks like their system isn’t picking up the changes correctly. I didn’t get notifications, either. I’ve opened a support ticket with them, suggest you do the same (hopefully it’ll light a fire under them to fix it).

In the meantime, I’ve used an Android app in the past for this sort of thing, called Web Alert, and it’s worked pretty well.

Thanks for the suggestion! I think this is a great idea and I’m more than happy to pass it up the chain internally. 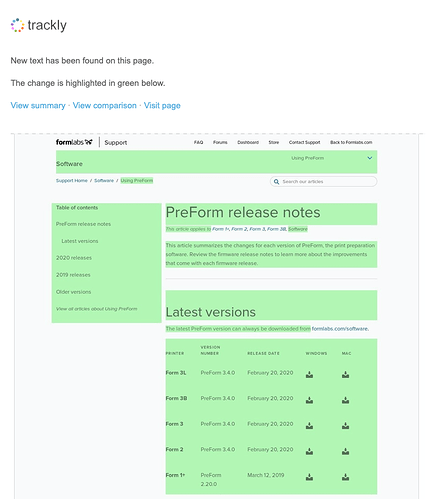 Yep! I can confirm I got that trackly.io change notification as well.

If anyone’s wondering - they responded pretty quickly to my ticket, looked into the matter, and said they think Formlabs had something on their end (maybe a React plugin) that blocked their bot. Not sure what resolved it, or how robust the fix will be over time.