I’m in the planning stages to build my own UV cure box. My original plan was to use a couple of the ubiquitous UV nail dryers and kit-bash a chamber around those. However I came across this UV lamp that claims to be 405nm wavelength on the Peopoly store… This UV LED fixture is ideal for fast curing your print with 6 high power 405nm UV LED.  It can solidify photosensitive resin efficiently and speed up post-processing. When held within 5cm of the resin, the resin will cure in just 10 seconds. Thicker...

I’m wondering if two of these would be a better choice. Another thing I’m curious about is the effectiveness of different mirror and metal laminates. I’ve read on other threads that the “chrome” or mirror vinyl stuff may not be as effective at bouncing UV light as aluminum even though it looks more mirror like.

I have the 20W version of the light you have above. In my case, I don’t even bother with making a cure box. Meaning, I simply just lay the light on top of the part and let it sit for a couple hours. The amount of light is enough to warm the part.

Also, while a reflextive cure box could be nice, you probably will want to make it larger than you really need because IMLO the real advantage of SLA is the ability to easily bond multiple parts together seamlessly using a laser. If done with a little care and with a little sanding, you can’t even tell they were ever multiple parts.

Finally, I also own a formulas cure station. I would not recommend this until they resolve their firmware issues .

Thanks for the reply and info. Is this the 20w version you’re using? 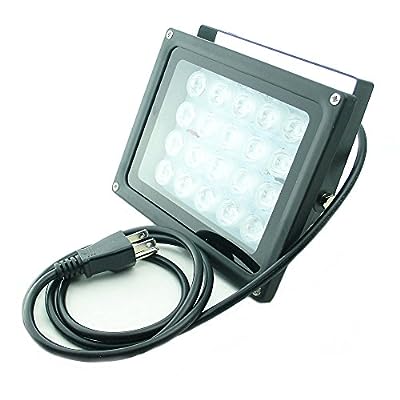 It says 395-400nm but not sure how much difference that would make in terms of curing vs the 405nm light.

What laser pointer are you using? I have several large parts that need to be joined and seamed so using the resin technique might be the way to go! 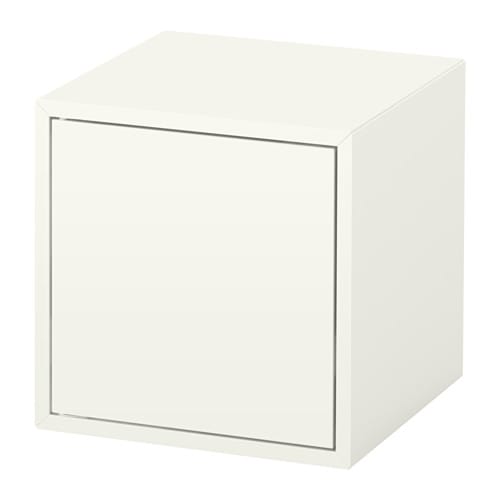 IKEA - EKET, Cabinet with door, , A simple unit can be enough storage for a limited space or the foundation for a larger storage solution if your needs change.You can choose to place the cabinet on the floor or mount it on the wall to free up floor...

To start out I’ll just sit the lamp in the cabinet next to the part on top of one of those inexpensive solar turntables. I found a simple push button timer on Amazon that offers useful increments for curing… 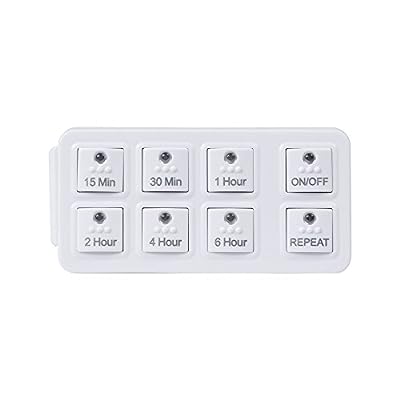 This smart countdown Outlet is lightweight, convenient and easy to use. It is an Automatic shut-off device that works with one simple touch of a button. It controls how long they stay on with the pres ...

Over time I may keep improving it by cutting out mounting holes for the lights, adding a UV protective window on the door, 2nd light, ac powered turntable, etc.

On the laser, I use a 500mW laser and it works perfectly. I just take a toothpick and put a very little amount of resin on the parting line, wipe it, and then hit it with the laser. It instantaneously cures.

Its not as bad as you think, because I just adjust the focus to be very wide. Meaning, it creates a very large pattern. Also, I wear the laser glasses and also wear a cheap pair of sunglasses on the bottom… This allows me to see very closely to where the light is without getting too much light intensity.

BTW, was the 20 watt UV light I linked above on Amazon the same as what you have?

Old thread, I know but thought I’d add to the great info already here rather than start a new thread.

I made a curing chamber of an old 0.7 ft³ counter-top microwave oven from Craigslist ($10) by gutting the m-wave stuff (Magnetron, HV X-fmr, diode , and ballast capacitor), and installed a 30 W 405 nm ultraviolet UV and power supply; retaining the microwave’s timer/turntable/etc.

The UV LED was mounted (w/ heat sink compound) to an old CPU heat sink, that assembly then mounted in an enlarged hole where the magnetron and it’s waveguide had been in the side of the oven. There was plenty of room in the oven’s side compartment for the LED, heat sink and LED power supply. There are two screws mechanically fastening the heat sink to the wall, I used metallic duct tape to seal an “pretty” it all up.

The microwave’s active cross flow cooling, designed for a 700 W device, is entirely adequate to the 30 W LED’s cooling needs.

I also used a couple of strips of the tape o the oven’s door, as the 30W LED is very bright (10-15 minutes seems to cure anything, were I doing this again I might use a 10 W LED).

Here are some photos of the finished project;

UV LED mounted on an old CPU heat sink and installed in place of the magnetron–the “bump” above the LED is left over waveguide I did not remove. (I see I need yet to clean up some of the grinding dust from enlarging the hole): 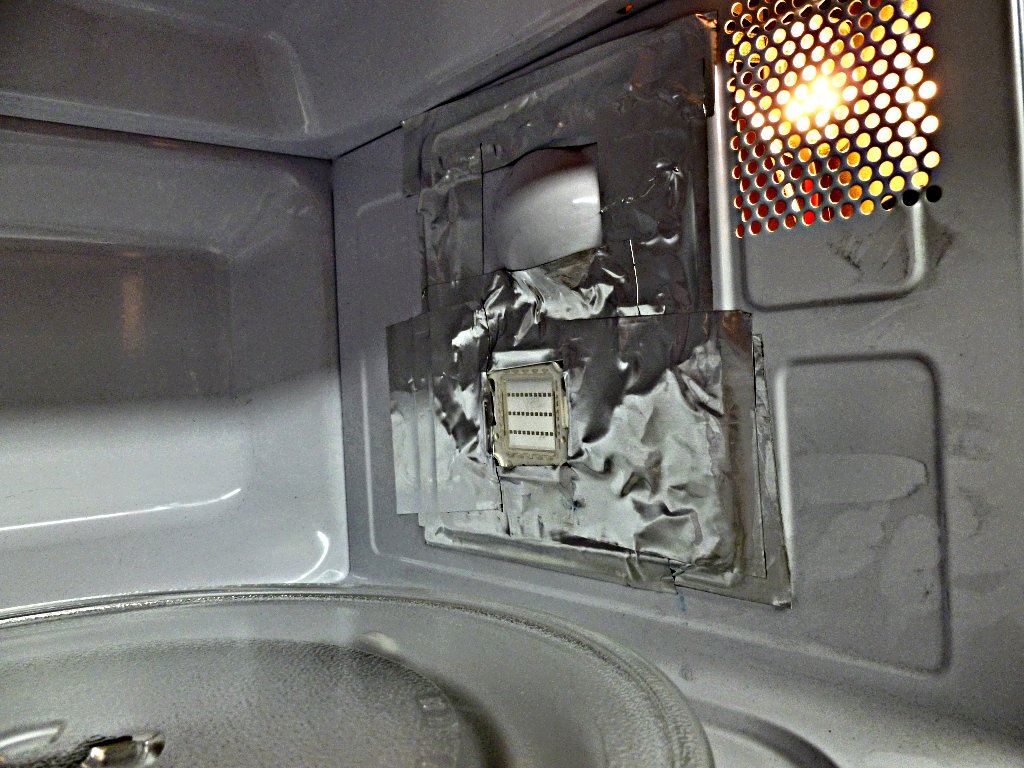 Chrome duct tape on window in m-wave door–I had considered lining the entire interior with foil, however with the 30 W LED the gloss white seems to relect the UV quite well… 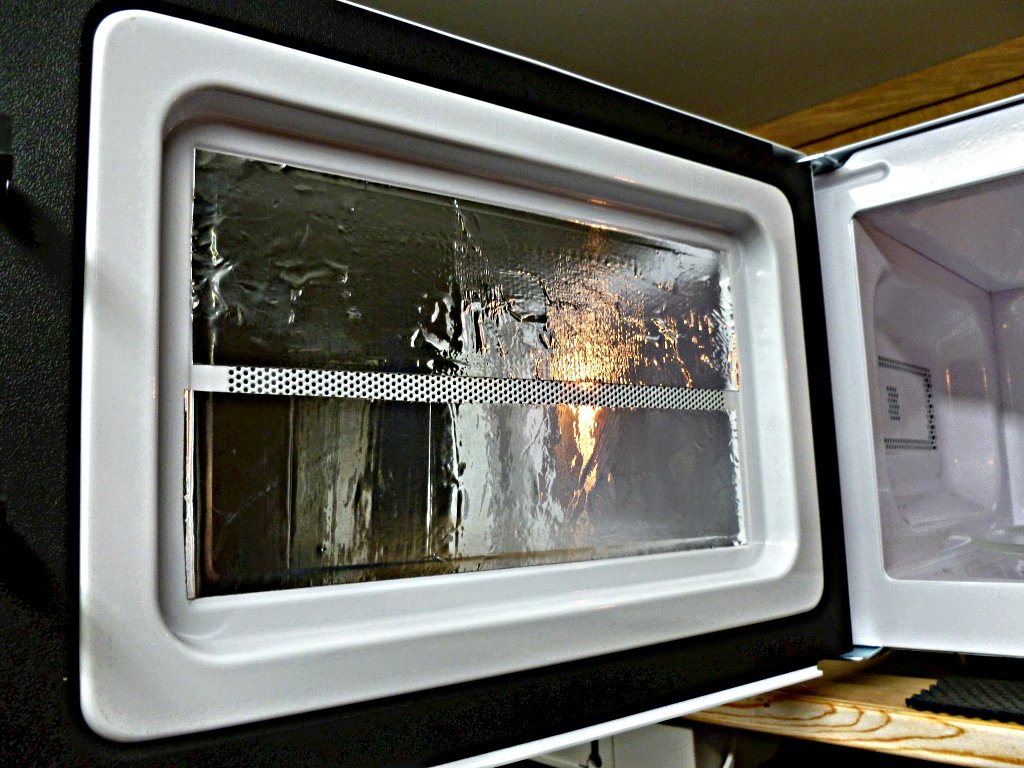 LED ON (room lights on) 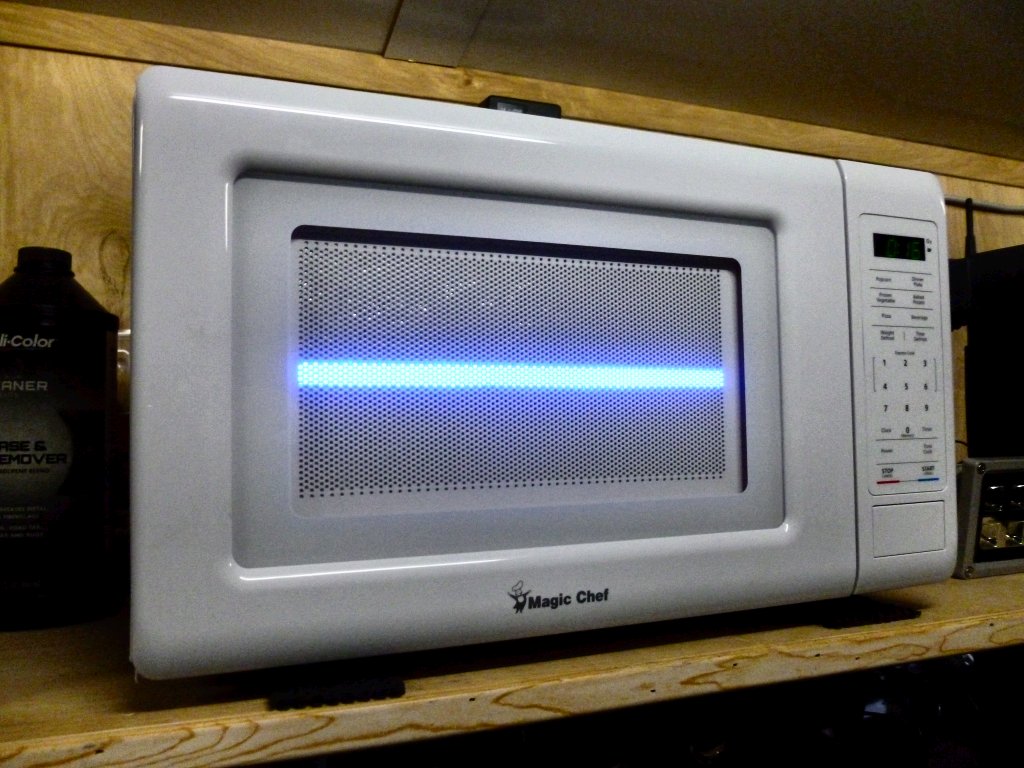 LED ON (room lights off) 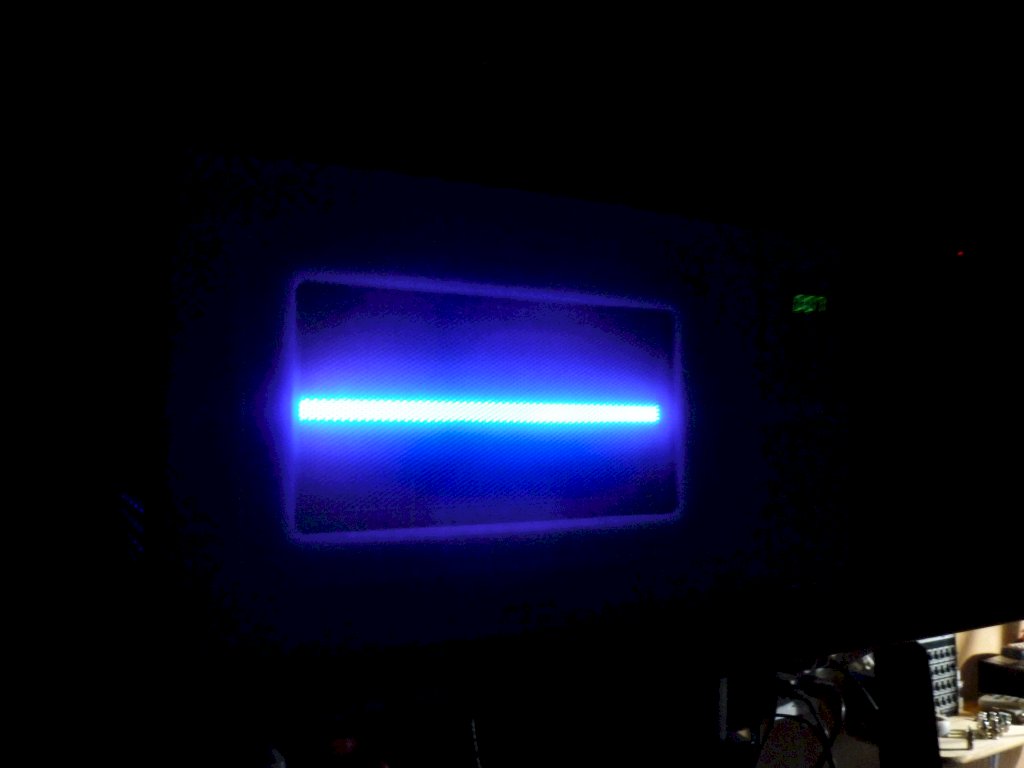 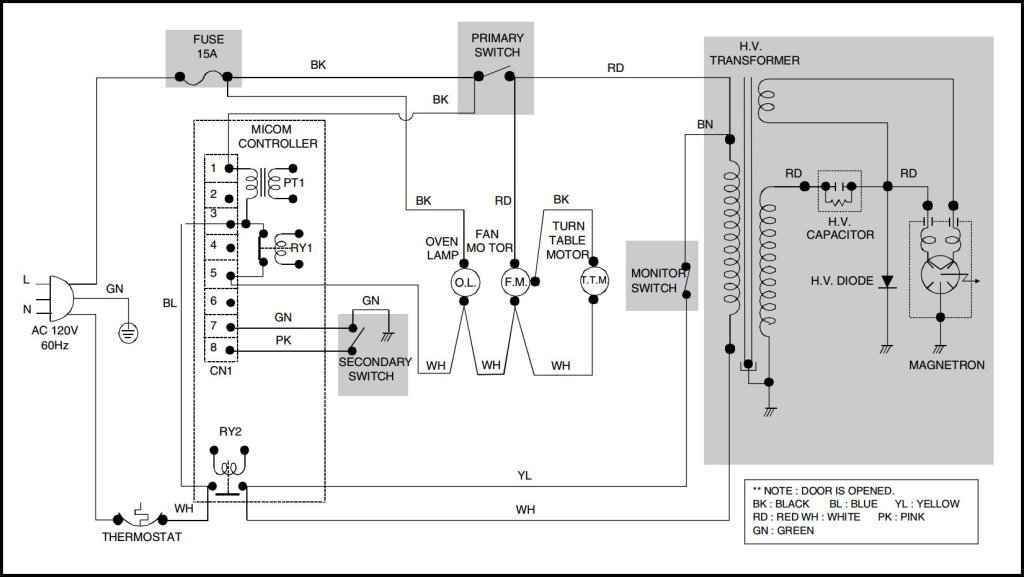 As modified schematic of m-wave