Hi folks. One of the main reasons I purchased a Form 2 was for creating custom toys and models, and probably the thing I do most is design and print custom Lego components. I wasn’t happy with the (lack of) level of detail and the unpredictability of an FDM printer for these pieces, so I invested in the Form 2. I’m quite happy with what I’m able to produce now, however the biggest challenge I have is with supports. Since these blocks need to be able to cleanly interconnect on both top and bottom, I’d ideally not have any supports connect to either the studs on top or the tubes on the bottom side. I’d love to also minimize supports on the face of the blocks but would rather deal with cleaning those up than interfering with the fit.

When I use the One Click mode and let PreForm do its thing, it usually chooses to rotate the bricks on their side and at an angle where the tube is facing downwards. This results in lots of supports on the top studs. But if I rotate the other way so the studs are facing downwards, I end up with resin pooling within the bottom part. I’ve also tried playing with printing these directly on the platform and trying to compensate for the first few layer compression by extending the height in the design, but seems unreliable/unpredictable and impacts fit too much.

Would any of the seasoned experts have any advice on the best way to set these up for supports (while minimizing resin usage)? Also, I’d be interested in hearing if anyone else has tried printing legos or something similar on their Form and what resin they’ve had the most success with. I use the Standard Gray the most, though I find it “gives” or squeezes a quite a bit more than ABS so sometimes pieces can be pushed onto a true lego piece but then “pop” off a few seconds later. In other cases, once it is cured for a while it can crack and be a bit too brittle when pushed onto another brick. White seems to do a bit better. I bought some Gray Pro to experiment with but didn’t realize I needed an LT tank so I’ve got one of those on order.

Here’s an STL of a simple 2x2x2 brick, if anyone would like to play around with it:
https://drive.google.com/file/d/0B9so-vNfFP7bd1Q3eFdmb2RjM1E/view?usp=sharing

Grey definitely isn’t the most suited to this kind of pieces, I’d hesitate between Tough and Durable. Durable will never break but might not be stiff enough to clip on other pieces and won’t have edges as sharp as you can get with Grey. Tough is a bit brittle but way less than Grey.

White, Grey, Black and Clear are all the same mechanically, they just have a different colour filler within them.

As for orientation, do not use the One Click print. While support generation is an amazing tool, the automatic orientation isn’t and this stage should alway be performed manually. The reason why auto orientation doesn’t work well is it doesn’t know how the part is to be used, is just tries to orient most faces at a 45° angle from the BP.
For this piece and the use-case, I’d print it with a 5° angle on the X and Y axii, and manually edit the support after the automatic generation to move the points which are on the edges and place them on an easy to clean face. Since this is a pretty small piece I’d also reduce the point size, here I reduced my 0.1mm but I’m sure you can be successful with lower values, you just have to experiment.

Thanks John, I appreciate your thoughts on this. I haven’t tried Tough or Durable, but ordered some samples to check them out.

On the orientation, I tried printing the .form file you attached directly and the result was similar to what I’ve found when printing this design previously, where it seems the resin pools up in the bottom of the lego part due to the ledge around the pipe that’s there since it can’t flow out. Am I missing something? Attached is a (slightly blurry) picture of the output. 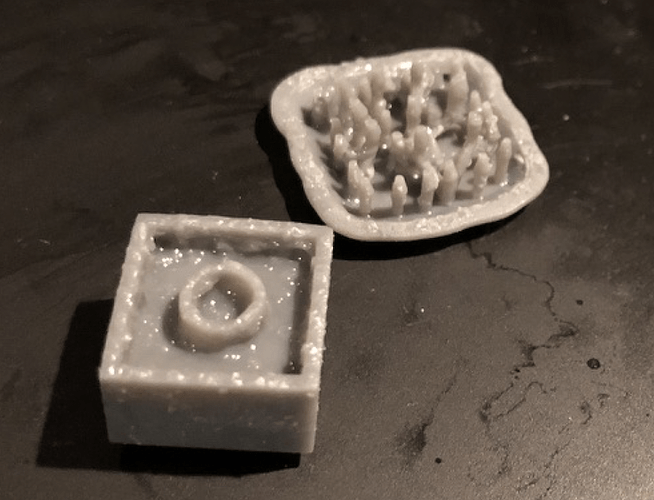 As said you can try reducing the point size further and maybe deleting a few supports. However I wouldn’t expect such a messy result from my printer. Maybe you ought to be more careful when removing the supports (the center pipe in particular should come out much cleaner than this) and clean the part with IPA and a soft brush as there seems to be quite a bit of uncured resin on the part.

Blind holes are definitely an uncured resin trap and extra care is needed before post-curing to remove the resin.

Since it’s a small part I might try to squeeze it in a print in the next few days for the sake of comparison… can’t make any promises though.

If you want to remove any doubt that your printer has an issue, you can print this and post the results on send them to Formlabs to get their opinion :

Thanks again, John. That was a quick print I made before I had to head out of town, so I only had time to put it in my Wash machine for 5 min and given how messy it was I then scrubbed it a bit with a toothbrush and water, and hadn’t cured it yet. A few days ago I tried printing some lego parts I’d designed and tried out the “On Build Platform” option and had reduced the number of points as well in an effort to save a little resin. Apparently it was too much and one of the 10 pieces evidently fell into the tank half-way through the print which then caused the rest to be messed up since the solid piece was in the tank. I fished out the part that fell but didn’t see any other loose hardened resin but perhaps I need to clean it out to be sure.

Thanks for the test print you pointed to - should I print in Clear as it’s set up or can I print with the gray tank/resin I was having issues with?

Perhaps this weekend I should print some additional tests all at once but with different rotations to see what works best. Just hate wasting pricey resin!

I fished out the part that fell but didn’t see any other loose hardened resin but perhaps I need to clean it out to be sure.

Definitely. Bits of partially cured or fully cured resin are often hard to spot and filtering the resin is definitely a good idea. Inspecting the PDMS layer of the tank is also a good idea to be sure no stray bit is stuck on it.

Thanks for the test print you pointed to - should I print in Clear as it’s set up or can I print with the gray tank/resin I was having issues with?

I read this file (provided initially by Formlabs) is expected to be printed with all Standard resins so that includes Grey. I have personally only printed in is Grey when troubleshooting issues.

This is my print of your lego part 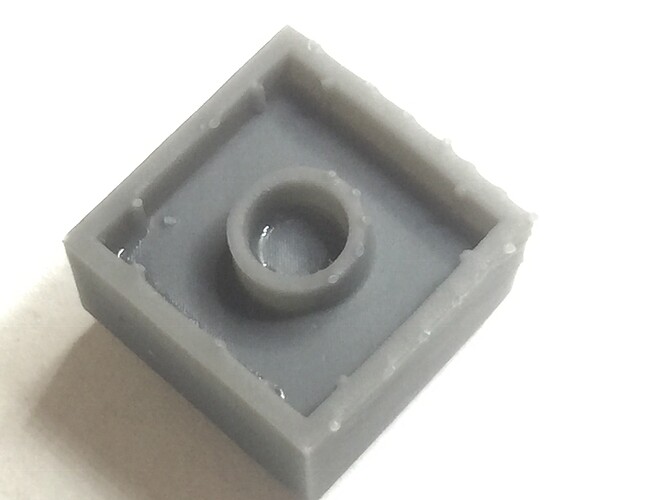 What I don’t understand is why you increased the thickness of the top face of the brick.

Thanks a lot Bill. That looks like a pretty clean print. I don’t have a good reason for why that top face thickness isn’t the same as the other walls - mostly it was because I was using the bottom part height for a variety of pieces including some shorter ones and reusing it. It’d definitely save some resin to make the top wall thinner.

Definitely. Bits of partially cured or fully cured resin are often hard to spot and filtering the resin is definitely a good idea. Inspecting the PDMS layer of the tank is also a good idea to be sure no stray bit is stuck on it.

I cleaned the resin tank tonight. First I filtered the resin and didn’t find any additional cured pieces or anything to speak of. Then I used the NOVUS No. 1 recommended by FormLabs and a microfiber cloth. I’ve run .8 L through this tank, and I do see what looks like some minimal clouding and then these dots which I’m wondering if they’re when I tried printing supports directly on the platform without a base? Does anyone see anything to be concerned about here or is this tank good for another liter or so?

Next I’ll print the test file you pointed me to, John.

After pouring out resin & scraping the tank: 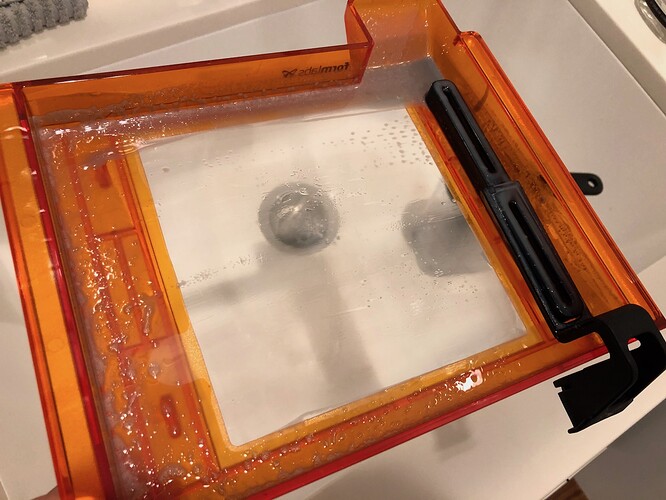 After cleaning the bottom with NOVUS No. 1: 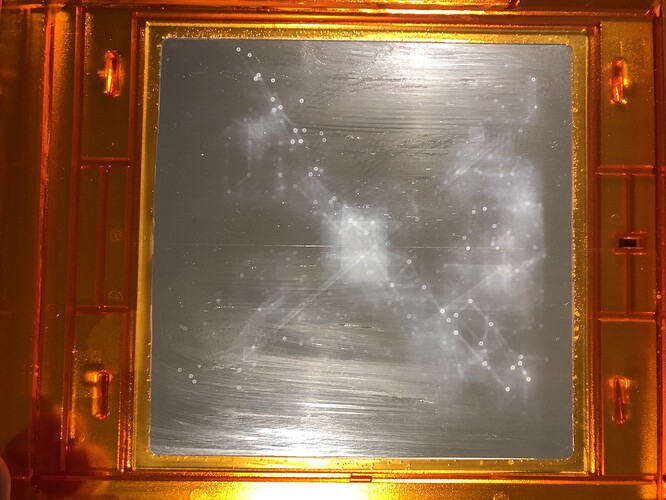 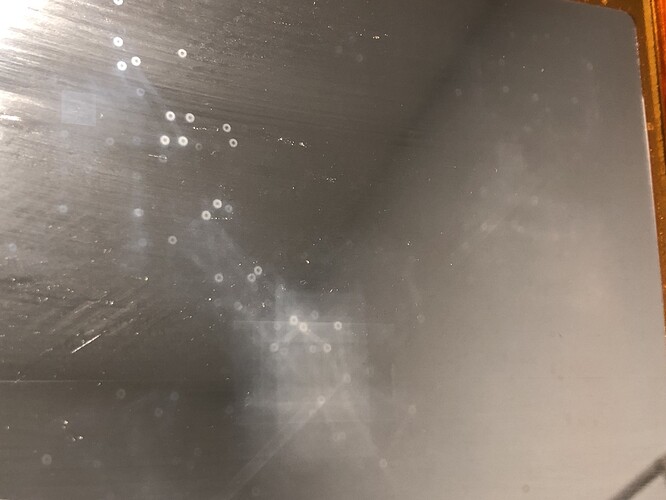 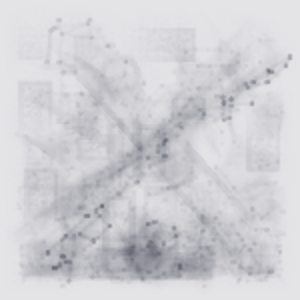 If you want to remove any doubt that your printer has an issue, you can print this and post the results on send them to Formlabs to get their opinion :

So I printed the Optics test file, and I’m really perplexed by the result, vs what I see in PreForm. What’s going on with 3, 4 & 5? Certainly I don’t see this deformation happening with the other files I print (see below in this post for an example of a custom design printed with same tank/resin). Is the tank (pictured above in thread) the culprit?

I printed this optics test at 100 microns, using Standard Gray. 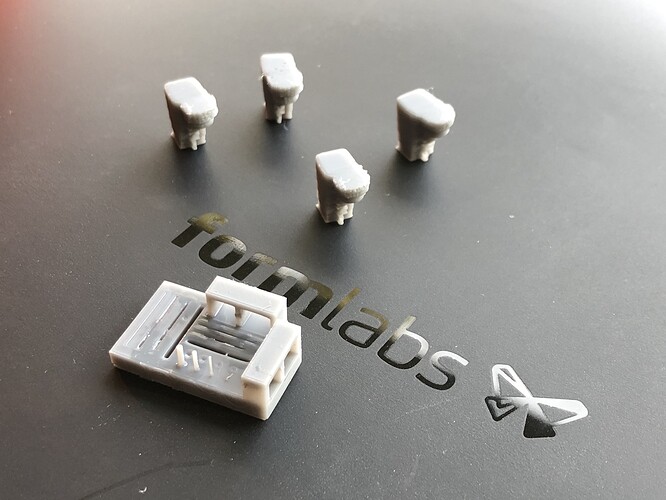 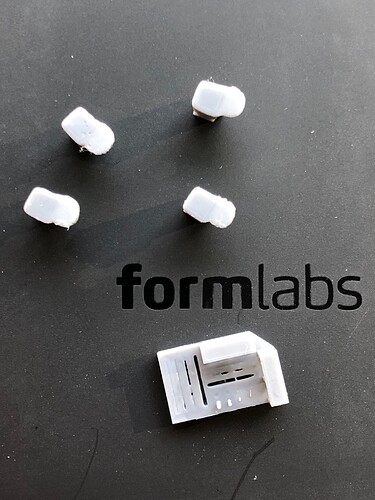 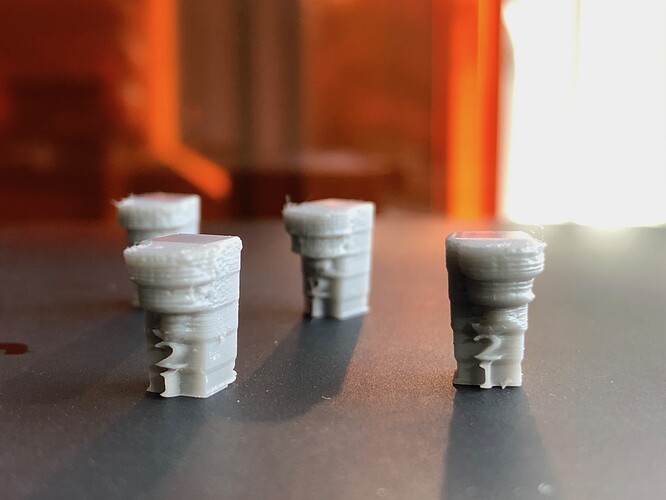 Also, side-note, I used the same tray after I cleaned it, and the resin I filtered and re-printed some of the lego pieces and while they came out pretty good, I’m getting a lot of little fragments stuck to the sides of my prints. Any ideas on what causes this? Do I just need to give up on this tray and start afresh? For these pieces I can sand them down but would not expect to have to do that much post-print cleanup. Here’s a few pictures (these were printed at 25 microns, Standard Gray): 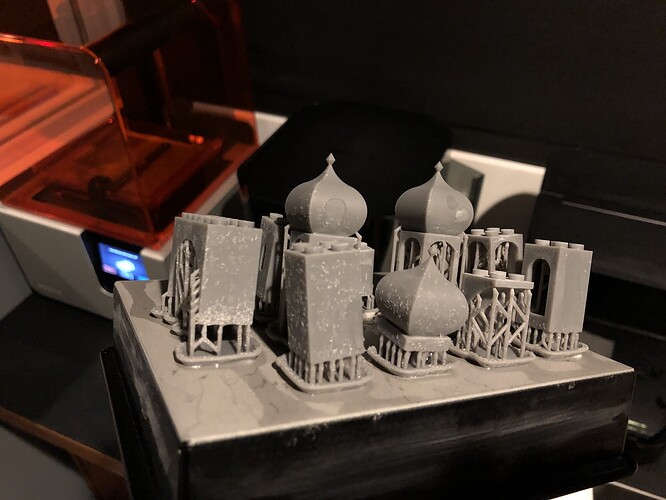 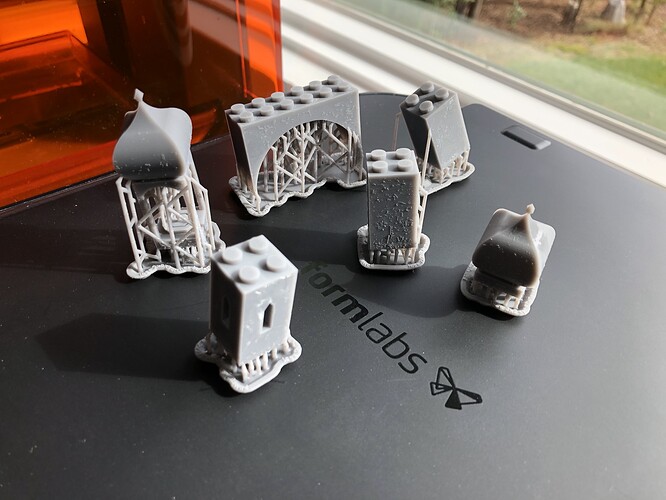 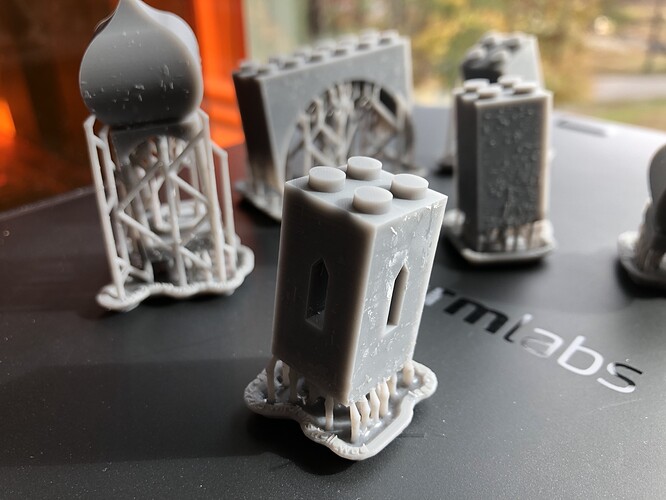 Test file result : this file is made to torture the printer, it makes several passes at the same place to exacerbate the issues. This is definitely not the result you should be expecting, it should look just like the .form file with maybe a slight draft to the pillars.

I would contact Formlabs support and send them the photos of the test print. From my experience they will probably have you test with a new tank and resin, at least with a freshly poured batch of resin to make sure it’s not the source of the problem, so you might want to do that before even contacting them to bypass the first troubleshooting loop.
After eliminating the resin/tank as the source they will have you look at the printer which is probably at fault here.