I’ve been working on a tuning machine design for our carbon fiber polycarbonate ukuleles and guitars. They’re functioning very well, but the teeth are not yet strong enough using standard black resin. Before I buy a bunch of resins to test out, could anyone recommend a resin? 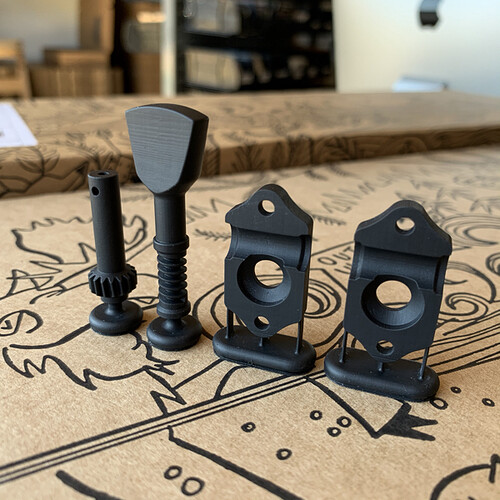 Those threads have to take a pretty significant load when the string is tight, if it’s anything like a guitar. I’m not sure any resin will prove strong enough.

Do they break right away, or after some use? Have you taken one apart prior to failure to see what kind of damage is occurring? Are you greasing the screw or running it dry?

This is the kind of thing that the glass-filled resin might be good for. My experience, resins do not do well in high-friction contact with other resin surfaces. They gall up. If that’s happening with your keys, that could explain why they eventually fail.

You’re correct. They begin to fail after they gall up. I tried a few lubricants and greases.

I’m receiving some sample parts from a filament printer company. Maybe we print the gears with the filament and the cases are resin.

Rigid 4K or 10K would probably be good for this. High strength and low friction. They are brittle though so any unintended large radial loads or impacts could make the part snap.

Durable resin also has low friction but is a lot softer so unsure how that would work here.

I just starting printing the tuning machines with the new 10K material. This stuff is pretty amazing. I’m pretty sure I’ll eventually get this assembly to work, but I’m having to make changes to the models for thick resin areas. Because 4K is extra thick, it’s hanging around the underside of arched features, and areas like the teeth on the worm gear.

Hope you are success on the gear. I’m also interest in Rigid resin but not sure which one will work for gear drive ? I want to make a worm gear set. Which is better between Rigid10K and 4k ?