Just wanted to let everyone know this thread is on my radar, and I’m getting some answers from elsewhere in the company for you!

Should have a longer response ready in the next day or so.

I was recently in touch with the European support department about this. They did suggest emptying resin out to extend lifetime of a tank, but could not guarantee it. So this kind of raises the question of what happens if we follow the advice, and the tank leaks on week 11 (when using Engineering resins or Tough, for example).

As a hobbyist who does not run a business or company, having to replace a tank after only maybe having time/funds to print 1 cartridge becomes very expensive in the long run, and may turn out to not be a viable option.

Haven’t forgotten about this! Just some unfortunate vacation timings from some folks here

Still on it, and apologies for the delay!

I had started a thread back in mid-July: Costs of maintaining a large resin library
It had to do with this, so I guess it lives on here…

As I try to grasp the economics of this for my case (independent designer, working alone), what I am seeing is, you might best settle on only 1 type of resin to do it all (such a pity!).

If you print about 35 prints with a 250-day tank, (or 1 print a week) you might add about 4,5 bucks of tank cost to each print, which is probably still less than the cost of the resin in an average print.
But if you divide that usage in 2 resins (ex: Draft and a second one for final parts) you are already paying more in tanks than in resin (or your prints need to be more than 50ml in average), which makes less sense.
If you want to have an “aggressive” resin too, for special cases (let’s say Elastic), and you use it less, obviously, it gets awkward: Given I have a project that needs rubber-like parts, I’d have a cost of 30 bucks per print on tank alone, if for example I need to print 5 times to fully develop a part.

I can translate the costs, but it’s a much harder sell!
We need a way to stop decay in-between prints…

Some might say the printer is not for me… But for who then? Only high-volume users? Isn’t this advertised as a prototyping machine too?

Or am I missing the point and this is the wrong approach to account for the cost of tanks?

So I just realized Dashboard has a lot of improved statistics - including nicely organizing tanks and showing lifetimes, etc.

I’ll go out there and admit that I’m running some tanks past their suggested lifetime. For example:

I check the undersides of the tanks before every print, as well as inspecting the inside of the tank by gently scraping the bottom with the provided plastic tool just to check the film. I don’t notice any signs of wear across all the tanks. This is probably because I actually am nowhere near the max # of layers printed per tank.

I’m somewhat taking a risk here to see how far we can stretch the tanks. It’s not clear whether the engineering team has actually tested “days with resin” independently from “layers printed”. For example, will a tank which has resin stored in it for >250 days and zero layers printed, fail on its first print? Or will it simply cause the “layers printed” lifetime to be less because of a prolonged chemical reaction between the resin and the bonding between the gasket & film?

Also, knowing what the failure mode is can be helpful because if it’s slow and visually detectable, then users can continue to use their expired tanks as long as they keep a very close eye on the tanks. This not only will extend consumable life for those of us who stock a lot of resin types, but don’t print all the time, but will also be somewhat of a “crowd sourcing” of information for Formlabs in case they don’t have the time or resources to do better lifetime testing on the tanks (something that I would like to see regardless).

I can chime in with one more:

I always assumed the issue is primarily around degradation of some adhesive used in bonding the films, but haven’t seen anything specific to support that speculation. It’s easy enough to inspect for damage, but my concern is a seam failure when the film is placed under tension.

Unless Formlabs completely locks out end-of-life tanks (which would be a showstopper for me personally - I’d sell my Form 3 and cancel my 3L order), some users are always going to push the boundaries. Learning more about failure modes and the specific testing that informed their guidelines would be really helpful in appreciating the risk and knowing what to watch for. I’m also hoping a v3 tank is eventually released which solves the problem for good and adds a magnitude of order to shelf life (even with resin in the tank).

My tank with Elastic expired today.
Inspecting it I discovered something strange, but I cannot say that this comes from the resin exposure or it was already like that. 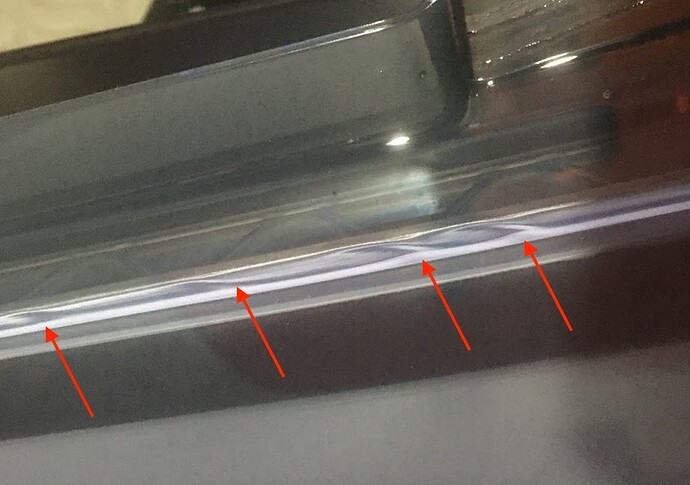 The other side looks fine: 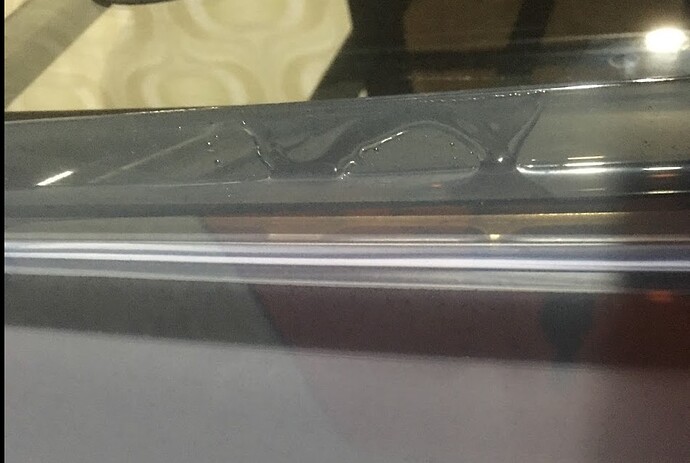 Would you dare keep on using this?
Would you say this is because of resin exposure? I can’t recall how the tank looked like when new

I printed a couple of things the last couple of days. No problem…

Has someone actually had a catastrophic failure with an expired tank?

I’ve seen those squiggly lines before too…it might just be weld lines or something from injection molding. I don’t think that is the main area of concern regarding tank lifetime…it’s mostly the interface between the two films - ie. the black gasketed area. This is the area which bonds the two films together and the resin supposedly attacks the glue or weld at the interface.

My tanks are still working fine. I recently changed my Black and Elastic tanks, but there weren’t really any significant signs of wear other than scratches from the LPU rollers and some dust that eventually gets between the films…so I probably could have kept using them. Many of my other tanks are still over 100% and I’m using them constantly.

What’s important is that:

Note that I’m not endorsing others to use the tanks past their lifetimes and I am not liable for any spills that may occur. I’m just not convinced that there has been extensive lifetime or HALT testing on the tanks - especially in situations like mine where I stock many different resin types, but don’t necessarily print a large volume per resin type. Lifetime characterization under different scenarios can be difficult and time consuming to do. The lifetimes are probably conservative values and likely more accurate for those who print much more often than I do. I also like pushing things to the limit

My tanks are still working fine. I recently changed my Black and Elastic tanks, but there weren’t really any significant signs of wear other than scratches from the LPU rollers and some dust that eventually gets between the films…so I probably could have kept using them. Many of my other tanks are still over 100% and I’m using them constantly.

I would be interested to hear what the failure mode was for over-used tanks. Or if that is not possible, maybe the criteria people are using to decide that the tank has come to the end of its useful life.

I would also be really interested in discussing a proper protocol of tank inspection!

I haven’t actually seen any tank fail from lifetime yet.

However, I have seen tanks leak due to failures or extremely high peel forces. Usually you get a small puncture on the top film which then leaks resin in between the film layers. Once this happens, it’s really obvious - see pictures in the link below for examples.

I generally inspect the films to see if there are any signs of this, but I also look at the magnitude of scratches on the film, and also whether the black gasket looks like it’s starting to peel away from the main films.

This was my Q&A at the session of Factory Solutions:

How do you scale up the Form 3 tanks as a consumable? In case of a 100 printer farm, I can’t imagine 100 tanks every 3 weeks (600hs just for non aggressive resins) ) being replaced… are there specific SKUs? (maybe without the cost and waste of the keep box) … is there a refurbishing program to avoid having to throw 100 tanks a month?
Answer: Julian - really great question. While 100 printer farms are not rolling out every day, implementing several of these now has led us to start investigating and trying to solve these kind of issues so we can save on waste and be more sustainable. Hopefully we’ll have more to share soon!

I thought Factory Solutions would be an area with enough critic mass to encourage the birth of a solution, (which might or might not benefit us small users)
According to Max Lobovsky, there are logistic issues to be solved for recycling programs (he was talking specifically about cartridges). In the case of tanks the issues are probably bigger (even less critic mass / need for cleaning / more shipping volume…)
Understandable.

But you got to start somewhere… Disclosing more data like failure modes, refining decay studies, helping with inspection protocols… anything that ensures that you don’t preemptively throw a tank with life on it.
The LPU is supposed to be resin proof… Is there a place to design a liner below so the whole assembly is “resin proof” so we can use the tanks until they leak

All in all, the lack concrete actions to crack down this issue is disappointing…

I want my tank V3

Me too. I asked one of the presenters if they were working on a V3 with longer service life, but didn’t get a definitive answer. (It was along the lines of “we’re always looking to improve”)

thats really interesting, by the way we have in the lab one dental dlp printer Spr…, which has exaclty same film as new film from formlabs its rigid liek polyester very slick on the top but has matt coatin on the xternal side for air migration i supposed to reduce saction force, but there is no other film second film and we didnt noticed lifetime of the film being so short at all.

Just to followup here, I’m still using tanks greatly last their lifetimes with no issues so far. The big factor though is that my lifetimes are exceeding the “days with resin” and not the volume of resin printed. The latter has been low across all the various tanks I own (around 12).

@Dkirch was going to follow up on this question back in August. I’d really love to see some more information from Formlabs, even if it’s just anecdotal.

The posts from January 2021 from this thread offer useful information from @rybu about a clever setup to to empty the tank.
I think that one downside of emptying the tank is that you mess up with the tank statistics, so you need to do it manually. But this has to have some positive effect extending the tank lifetime if you can live with carrying out the chore.
Murphy’s law says you will need to print with THAT resin the very next day you pour it out