I have my printer on top of a carpentry table (which has holes on the horizontal surface). I have a little space heater under the table, and turn the space heater on about an hour before I start a print. That works pretty well, but I think a fume hood would probably be better.

There are many ways to accomplish the same basic workaround, I agree. But the point of my post wasn’t that I needed a workaround. My point was the printer is perfectly capable of heating itself up, as evidenced by the fact that it does eventually heat up and print fine. A workaround shouldn’t be needed.

Formlabs should “expose” the heater functionality to address the problem of a printer starting up in a cooler ambient environment. Or, since the printer unquestionably knows how cold it is at the start of a print, it could just initiate a preheat operation automatically (though a checkbox in PreForm would be good, too), and not just start moving the wiper…

My stupid FDM printer has a “preheat” function to get both the bed and extruder up to temp before initiating a print. How hard can it be? Come on, FL!

I understand and completely agree

Modellers, on the subject of heat, do any of you keep your resin stored in the separate tank cover in a warmer room? Plus how long do you think you can leave resin in the tank before you need to use it? IE between Jobs, 24 hours, 48 hours, 4 days?? Be interested to know your thoughts. ATB Chris

I leave my resin in a warmer room to deal with the issue @Randy_Cohen is mentioning. I’ll continue to do so until the warmer weather comes back or until there is a preheat function.

I store my resins in the tank indefinitely except for the aggressive resins like Tough 2000 and Rigid, which I pour out. Some tanks have been holding resin for 6-12 months.

It just happened to me and I can totally identify the problem with this.
Tough 2000, in an unheated room at just below 16ºC (60ºF) and perfectly filtered (but viscous) resin.
If only I had read this first and not abort the print 4 times and lost time trying to find some obstacle…

I totally second the feature request!

PS also: every time I restarted, it seemed as if every time printer had to refill the tank with the same amount of resin… Does the printer really measure the present amount of resin first? it feels as if there was liters inside now… I wonder if I should pour some back into the cartridge. I’ll let the resin warm to 70ºF first.

There’s a float on the tank that moves a lever as the resin level rises. The printer uses that to determine if the tank has enough resin. It has no way to actually meter the resin coming out of the tank. So yeah, the refill process at the start of a print can take a while to complete, especially when the resin is cold and not flowing.

I just put back the tank with resin at room temperature at least. (((I had put it just under the room’s radiator and I’m measuring with a thermal camera, so the resin might be reflecting the IR)))
But… it’s doing it again.
Now I’m gonna sit out the 15 minutes and I’m thinking it’s gonna be a very paranoid 10 hours print

PS: thanks, I know about the floater but I was wandering how accurate it is. I know there’s a calibration procedure but its but takes ages

Just to follow up on this, I found a workaround that I detailed in this thread: PREHEAT work-around!

Yeah. I saw your other post. But it’s marginal at best, since you still have to attend the cold printer to get it started. I just open the lid and push the mixer arm back in to place each time it disconnects and eventually the resin softens up enough it stays put and I can walk away…

Obviously I’d like a remote warm up option, but IMO this is way better than having to reseat the mixer. I can just setup the printer to warm up, go do something else, and then come back when it’s warm and ready to go.

I’ll take this workaround gladly while we wait for a more convenient implementation! Thanks for sharing it!

but IMO this is way better than having to reseat the mixer.

I guess I should have been a bit more charitable. Apologies. I agree this is a “less messy” workaround solution compared to my reaching in and reattaching the mixer arm. But I don’t want a workaround. I want FL to add a feature to support preheat. It shouldn’t take a rocket scientist to make this kind of change. It should be pretty simple, actually. I don’t have to know their source code to say as much. I’ve managed software and firmware development teams for decades. We just need an alternate way of enabling a feature that’s already implemented, not a new feature. Easy peasy.

In addition, the filling sequence happens before heating. Since the viscous fluid flows less freely, the float switch takes longer to engage, leaving the machine to think that a cold tank is filled less than a warm one. Heating should happen before filling so the viscosity of the resin is optimal for resin level sensing.

Priming should also heat the machine to a few degrees below print temperature, maybe 24-25 C, so heating doesn’t take as long in cold environments.

I’m in the same boat here. My lab is usually ‘cool’ and it takes a while for the resin to warm up. This leads to frequent filling errors, especially on a new tank + new material. The ability to enable the pre-heat function via the dash board would have eliminated most of the errors I’ve encountered, and having to go back to the lab to restart a print.

I think the place to control this should be in the dashboard. It should also display current temp.

I suspect the resin and tank liner probably age faster at elevated temps, so keeping it set at 90F 24/7 isn’t practical. It would need to have a timeout so once it reaches temperature, if you haven’t started a print in ~30 minutes, it will let it go back to ambient. With some of my prints, the warm-up time is a significant portion of the total printing time… and time is money.

I tend to overfill the tank a little bit, manually pouring resin in until it’s almost covering the mixer arm. That way the printer doesn’t have to fill the tank, and time is saved.

The auto-fill feature is great for big prints where I’d rather not be monitoring the print every step of the way. But pouring in manually really speeds things up. 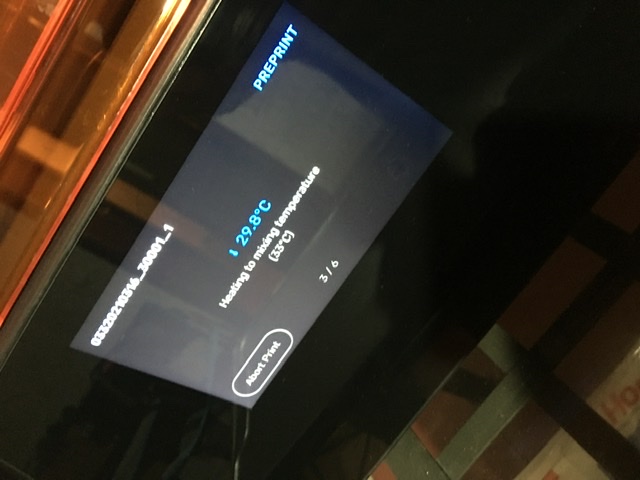 Yes, I too noticed that change and was psyched to try it out. Except my machine, in an ambient of about 63ºF, cannot achieve the 33ºC starting temp required by Tough2000. I have to “preheat” my workshop for 30 minutes before attempting a print. And then, if I don’t want to wait another 30 minutes for the Form3 to heat the resin up, I have to put a cover over the machine.

My machine’s heater may not be working correctly.

It probably isn’t based on how my machine is able to preheat successfully in cold environments.