I was wondering what type of motors are used in the form 2? can they be replaced with quieter ones? its probably a bit early to want to start hacking at it but i thought id ask if there were some options…

On some projects I’ve been printing 24/7 recently through the night but the noise from the motors lifting it up/down and the wiper going are a bit tedious, i have a basic enclosure i built up with soundproofing foam but it doesn’t seem to kill the noise that much, it was intended for something else and just happened to fit the printer inside it… so i was wondering about getting the motors etc swapped out for something quieter / smoother (if there is such better spec items available)

i asked for a db level rating before i bought it but the local guys didn’t really have any decent operational sound level info to provide me but said it was quieter than a normal 2d printer, which is sort of a bit of a stretch.

Thanks for any suggestions you may have.
Or even a spec on some (likely) more expensive but quieter motors.

The form 2 uses stepper motors. They are the noise generators.

Picture below is of the Z-axis.

You could replace the stepper motors with DC motors with a gearbox and encoder. These types of motors are very quiet. They can be quite expensive and you need to add a driver board for each axis and make sure the pulses per revolution is the same. I have used maxon motors in the past for spindle operations, but there are already cheaper chinese alternatives.

It can be done, will void your warranty and it needs some work. Is it worth it? 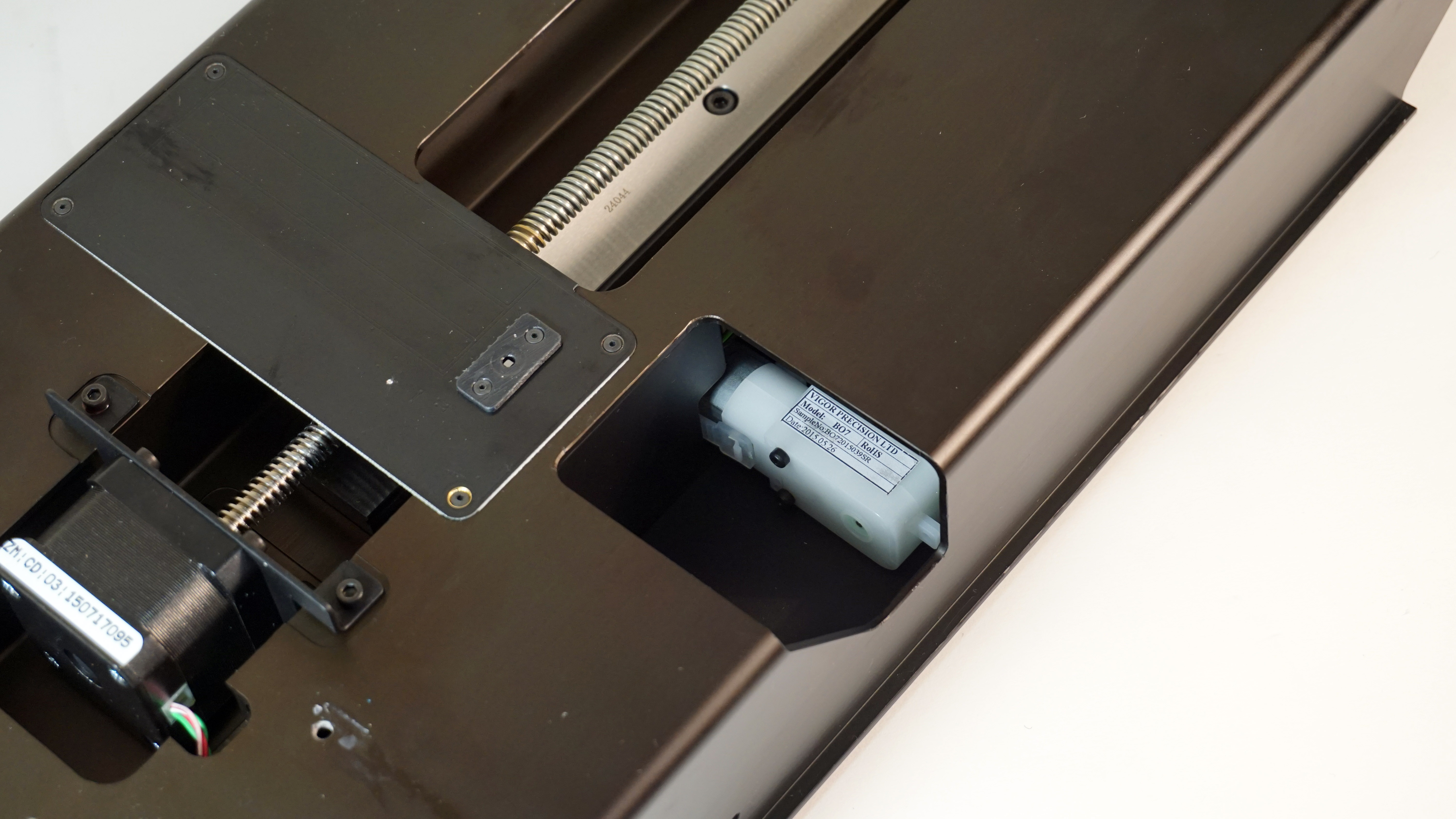 It’s the sound of productivity!

I assume the printer is in the room in which you sleep? Obvious question but can you move the printer? Or maybe you need a white noise machine!

A much cheaper option than replacing the motors and voiding your warranty.

I would just sleep with the TV on. That’s what I do…

I fall asleep to space/physics/astronomy documentaries most nights…I’m such a nerd.

Thanks for the replies guys!,

I’m in a 3 level apartment, the studio where the printer is is up the top level and i sleep on the level below, if i close the door its reduces the noise quite a bit but its still audible through the wood floor/ceiling even with my makeshift sound proof booth.

i was thinking of putting it in the little storage room down in the underground garage, but was worried about local wildlife going for a swim in the resin in the middle of prints… as the laser light might attract little moths and things.

e.g i asked about fumes and other operational concerns along with noise before i bought it, as there wasn’t a lot of good detailed spec info readily available.

As some print took 10-15 hours. I live in apartment block and i do not want to make too much noise to my neighbor. Day time noise is not a problem, the street noise take care of it. But at night, it is very obvious. I hope they add a software option where i can select the timing when it run on night mode (where the z-motor run at much slower speed). Now i pause during the night, but the print show a line which make the print imperfect.

I have the Form 2 in my home.
It is loud, it is annoying, it is un-acceptable.
I had to build a wooden box to slightly increase my odds of going to sleep.

Why not use quality controllers like in this video ?

The drawback of making the machine more quiet is that your stepper motor will lose torque(stepper noise reduction/smoothing usually works by reducing step size from full steps between the coils to moving between the stepper coils). The steppers are fairly small and when building large parts, they sometimes miss steps already… So reducing torque is not a good option.

There is also more to noise reduction than just replacing the stepper motor drivers/step size. The thin walls and lightweight structure and hollows inside the machine are a perfect resonance box. So while you could try to minimize it, the noise will still be amplified…

It would be the easiest to just build an isolation box around it with sound insulation matts and check the temperature reading on the display to be sure it’s getting too warm.

Quiet printing mode for overnight printing, or in living spaces