So, I hate machine shops and I’m building a robotic vehicle which uses linkages for locomotion. Instead of machining aluminum, I’m thinking of printing hollow parts with TOUGH Resin and inserting a steel rod for extra strength. Then, once inserted I will seal it up in Tough resin and allow it to cure

Does this sounds feasible?

You might also be interested in this OpenFL experiment Formlabs did embedding carbon fiber into one of the layers during a print.

Could you possibly post some pics of what you are trying to do? Might help in giving you an answer with certainty. 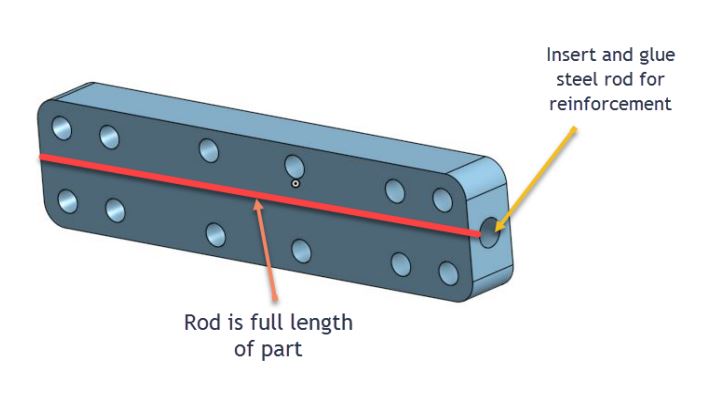 How long is that part? Formlabs recommends 0.1mm clearance for snap fits. So I would make the slot diameter at least 0.2mm bigger than the rod diameter. More if it’s really long, or if you want to leave an extra gap so the glue doesn’t all wipe off as you push it in (although you may find you don’t even need glue). You can try it out on some shorter pieces to get a feel for insertion force required. Ironically most of my snap-fit experience is with Standard resin; Tough has more flex so will be more forgiving.

You might also want a very tiny vent hole in the other end to make insertion easier (so you’re not pushing against a pile of air, especially if you’re using glue and it forms a seal against the channel). It’ll also make it easier to clean / drain the channel during post-processing.

I expect the final part will be quite strong!

I’m curious are the holes for motors at the ends and a heavy duty bearing or axle of some sort in the middle? Feel free to share a picture or video of the finished assembly.

The metal bone will add a lot of strength. As others have said, leave enough room for the rod to be inserted. I’d also use an epoxy of some type instead of using resin and hoping it cures buried that deep in the part.

Will the holes be pivot points? If so I’d reinforce them with metal tubing such as the telescoping tubes K & S manufactures, or some sort of bronze bushing depending on the size of the hole.

Just a thought on how metal threads and such are typically inserted into plastic… you could not insert the rod carefully. If done right, it will be the tightest fit possible and shouldn’t move once cool. You could then touchup with resin instead of relying on the resin to hold it it.

I think you’re right. a tight fit…as much as possible Thanks!

plastic wrapping a single linear rod like that will be highly prone to torsional fracturing if the forces on the surrounding plastic have any kind of twisting force applied to them.

While the rod my resist bending moments - I don’t see it adding any significant tensile strength if the linkage is being attached thru the 12 transverse holes… there is no significant transfer of load to the rod in lengthwise tension.

If you are looking for tensile strength- you might do better to simply laminate a hole punched sheet of carbon or kevlar cloth on both sides bonded with UV resin.

As to tight fits… beware- steel conducts heat far better than resin… too tight a fit and a sudden rise in temperature could cause the steel to fracture the surrounding resin.

I made an electric violin using a stainless tube spine to add the strength needed, and it worked brilliantly. I used clear resin with an 0.1mm undersized hole, reamed it back to the correct size and gently tapped the tube into place. The force is nice and predicatable of course in a violin, opposing the string tension, where as @Sculptingman points out your forces may be more varied and cause different issues.

Wonder if kevlar (light color) is better because UV would penetrate it easier than black carbon?
This is purely for bend strength

Awesome Andrew. Sounds like it was a good solution for you

The strings on a violin apply a bending moment to the neck, as well as some compression.

This allows the surrounding resin, in trying to bend, to bear on the sidewalls of an embedded tube. The force is distributed across the full area of the steel and so the steel can equally impart resistive force to the greatest area of plastic.

However, a single rod will not bear any load from a twisting motion along its axis…
the rod acts as an Axel. And the only resistance is the friction of adhesion of the plastic to the steel acting in shear.

By the same token, in tension, the same applies- the plastic is being pulled, but no load bears on the steel- only the shear resistance of adhesion.

So in planning to reinforce printed parts with metal or other materials, you want to look at the force you anticipate being applied and design the insert or reinforcing in such a way that either maximizes adhesion… or even better, that transfers load thru direct bearing on as much area of the reinforcement as possible.

As to which fiber might work better- what it comes down to is which is going to get the best bond to a UV resin.

Glass fiber is certainly more clear… but I do not think that UV promoted acrylics bond to glass nearly as well as polyesters do…
but Formlabs staff might be better able to give direction as to which kind of fiber reinforcement gives the best bond.

PS- also consider that if you want to resist a twisting moment AND bending moment, you can use SQUARE rod or tubing.
Think of reinforcements like they are a mechanical assembly. How do the parts mesh?
A square rod, in torsion, will cause 1 full half of each of four faces to bear in compression on the surrounding plastic… that is a good transfer of load, distributed more evenly throughout the material. its just a lot harder to accurately ream out a square hole to dimension.

For something like a square rod, print the hole slightly oversize such that the rod can slide thru with little force… and make up the difference with an epoxy adhesive.

Interesting…and very helpful. I was wondering how “L” shaped (angle iron) might improve the forces it can handle

L will work, but its like half a square tube. it will provide half as much bearing surface.
In torsion, each leg of the L will try to separate along half its area and apply compression along the other half.
But a length of angle iron does not resist torsion as well as a smaller diameter square tube.
L is ONE 90 degree break in plane- square is Four 90 degree breaks, Square tube has 4 times the torsional strength of the same weight of L.

Your biggest concern is the transfer of load from the the bolt holes, to the reinforcement.
I assume those are bolt holes.

the weak spot is that the bolt holes have to transfer load thru nothing but the resin. you have multiple bolts- and that helps distribute load somewhat- but failure is still defined by the strength of the resin surrounding those bolts, alone, and not significantly mitigated by the reinforcement.

Again, if bending in plane to the plate is the only force you are resisting, then a single rod or tube inserted may perform fine.

if the plate is being PULLED in plane- then it won’t offer any significant strength.

If it is being twisted axially- the square tube or angle extrusion will be better- but still not offer tensile improvement.

Another solution is to insert something more like rebar. A rod that has crenulations along it full length that you would be filling with epoxy when you inserted it.

But the real question is how much force are you applying?
and what kind?

if you can quantify the design forces you can use the material data sheets to determine which resin and how thick it needs to be to predictably handle the forces involved.

Interesting. Would I be correct in guessing that you’re an M.E.?

This is interesting and useful information that I will be using going forward. I over-designed
this part as gravity and weight of the object resting on it (30lb) are the only forces it will see.

Nope- I’m a sculptor.
But sculptors have to build things that are structurally sound, and so a basic knowledge of physics and materials really informs and extends design competence. The dome of the Vatican was designed, for example, by Michelangelo.

I also have an extensive background in product development, and production… molding, casting and such. Everything from tiny plastic toys to projects that are architectural in scale and in scope.

Resting on it how? Is the weight bearing along the axis you want to place the rod?
Or is the weight on the flat wide area?

When a member is placed in pure compression, then the force acting on it is to squeeze it vertically- which manifests as SPREAD laterally. In concrete columns, for example, the vertical rebar is to resist FLEXING of the column- but most of the compressive forces are transferred to the HOOPS of rebar that form a stack of rings each oriented parallel to the ground plane.
To that end- if you are trying to make a printed part resist spreading from compression you would put a Ring of metal- or a ring of some other high tensile material- embedded just under the surface around the circumference of the part parallel to the table or surface it will rest on.

that’s if it needs it at all- I’m not sure the materials sheet for formlabs’ resins show compressive strength- but they should. its pretty easy to calc…
eg- if each foot is 2 square inches in area- then each foot should be able to handle half the overall weight if there are 4 feet. ( because you will probably put it down on a surface that is not perfectly level, and so one foot will not be carrying load and at least two adjacent feet will be carrying more load )

Great info Scultingman. I think I better do some studying

if the plate shown in your drawing is gonna lay flat- that is, bearing weight in its shortest dimension- then the steel rod as drawn weakens the compressive strength of the foot.
The reason is simple- as the weight bears the resin compresses… but the resin directly over and under the rod is much thinner, and the steel rod is unyielding. the rod will act as a wedge- splitting the resin in two at the Thin spot created above and below the resin.

it won’t happen immediately- but that is the force you are applying.

Plastics are polymers… long chain molecules. As such, they will do a better job as a foot bearing weight all on their own, as long as the load doesn’t exceed their strength.
just design the mount for the foot to allow for the plate to get a mm or so wider over time as the constant load stretches out the polymer chains laterally.

over time- you might see the foot lose a tiny fraction in height, and gain a fraction in width. But it is unlikely to fail.