Once upon a time I printed a towel hanger for our glass shower door. I printed it in clear, but it broke when it fell, so I decided to try again with an engineering resin. The question was whether to go with Durable or Tough. I went with Durable, but now the problem is that it distorts when given a constant load. So now I am considering trying Tough.

I don’t really like to try new materials willy-nilly since it means buying a new tank as well.

I get the feeling that Durable is intended for things like living hinges that need lifetime flexibility, which I don’t. So is Tough the way to go for things that need rigidity and more impact resistance than standard materials?

That was my first thought… but now I’m torn between Tough 1500 and Rigid 4k.

Tough 1500 won’t creep like Durable. But it will have better impact/shock resistance than Rigid 4K because it’s a bit more “bendy”. I’ve used 1500 for a number of load-bearing parts and it’s worked great.

For me, all I printed in Tough 1500 and 2000 became bent after a few months of having just a bit of weight (often between 100 and 300g) on them. It might be tough but doesn’t maintain form over time when force / weight is applied constantly.

With Rigid 4000, on the other end, never had a part bent (even after more than one year of weight on them) but it may break if force is applied on thinner areas.

Oddly Gray Pro works fine as well for parts that need to be stiff and may fall once in a while.

A towel hanger, and assuming it will be small in length and wide (above 5mm) should work well with tough assuming the towel won’t be very heavy.

I’m going to say the towel is heavy. Think a bath towel you hang up after a shower.

It all depends on the design. If it’s a thick rod (for example 5cm long and 1cm wide) it should be perfectly fine.

Being short minimizes the area that could bend and being thick prevents it from bending.

If you make a rod 10cm long and 5mm wide then it will bend quite easily over time but thiamin the case with most resins (some more than others).

I think the design is sound. The versions I printed in Clear were fine unless they took a tumble.

In that case it should be fine.
Worst thing it could happen is a towel on the floor. I would be more concerned if it was an egg support

For a hangar with constant load, I would personally go with Rigid 4000. Unless it was going to get dinged up (like, potentially dropped on a ceramic floor) in which case I might be convinced to go with one of the Tough resins.

Even Rigid 4000 can deform. Here’s a bracket I made for the shed a few years back. Came out exactly like the model. 8mm thick material, and about 1.5° upward angle. But after three years or so under load and lots of temperature cycling (it’s mounted up near the ceiling where it gets really hot in summer afternoons) it eventually sagged. I’d guess the load is around 8-10 lbs per bracket.

As a bonus, Rigid 4000 sands/polishes to an absolutely beautiful finish. 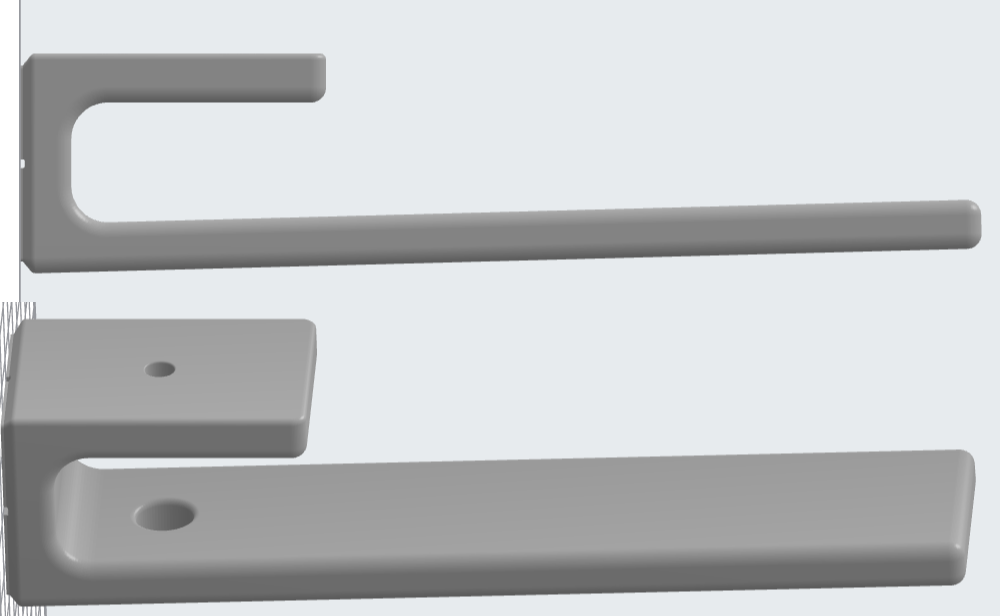 I bought a tank and cartridge of Rigid 4K and I’m disappointed in its impact resistance. It prints beautifully and is the most dimensionally accurate resin I’ve used so far, but it also shatters like glass when dropped in my testing.

So I think I am going to clean this tank out and try using Tough 2K.

Tough 2K is pretty good, and still stiff. If you aren’t going to use the rest of your Rigid 4K and want to sell it PM me - I’m in Canada.