Anyone Actually using a Form 3 printer?

As I have high volume prints I’m sort of looking at replacing one of my Form 2 printers with a Form 3. But, I want to make sure they are living up to FL hype once they are in a production environment.

Big issue is “How Long do the Trays last?” Anyone have an answer on this?

Form 3’s are on track to start shipping at the end of this month to folks who pre-ordered, so there won’t be much user feedback quite yet, but soon!

We’re still in the process of long-term tests on Form 3 Resin Tanks. That being said, at this time we’re confident these new tanks will last at least as long(but likely longer) than both our Standard and LT tanks we currently offer.

Rest assured as soon as we can we’ll be giving more specific updates on this, as we know it’s understandably a very important concern for our current and potential users.

For the cost difference I’d expect longer life out of these tanks. As a manufacture disposable costs cut into the bottom line.

Have/will review units be sent to any third parties?

Pretty disappointing that “customer loyalty” discounts evaporate before anyone can get real world feedback about how the Form3 performs. I know Formlabs is trying fill the coffers with preorder cash to help offset the initial production run costs, but telling existing customers that their loyalty is only appreciated when making a purchasing decision before a product even hits the shelf is pretty insulting.

I agree. If it’s such a great product why don’t they have data on their own testing plus they have had it out in the field at commercial sites. What’s their results on the trays.

Its hard in the UK to get to see a Form 3, I have had an invite to see it in operation at a two day event next week - the problem is that the fees are £800 (YES - EIGHT HUNDRED POUNDS)

Just also discovered that one of the Form 2 distributors had one (with people from Formlabs to demo it) for demo for just a day last week - yet they don’t have their own machine yet. They said they thought Formlabs had published the event… We never saw it anywhere…

Is there only one demo machine going around Europe? It does not generate confidence that it will actually ship in June in Europe 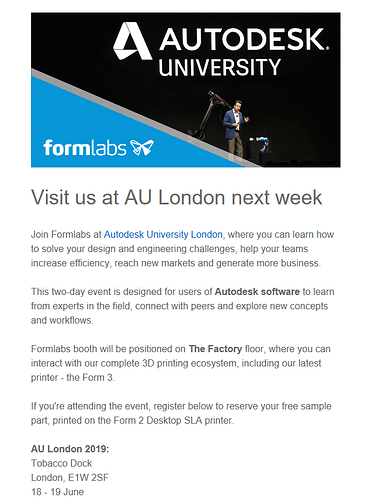 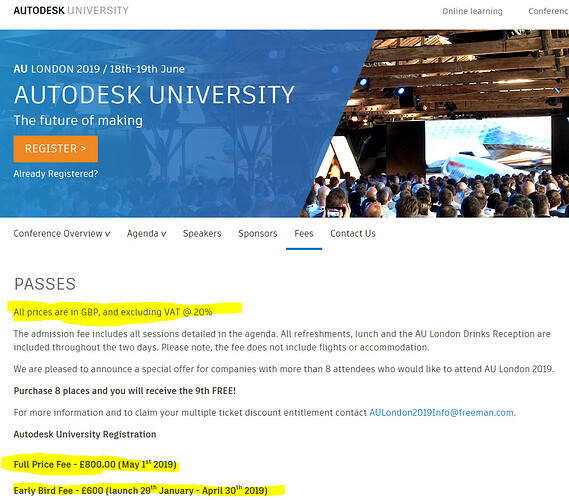 They shared the tour on twitter. They go round in Europe. I think they are in The Netherlands now(or already done?).

It’s a pity that for the Form 1 and Form 2 they were send out for testing(remember bunny’s teardown and review?) but this time we have to trust blindly that it is a great product in order to profit from the discount. I’m still a little hesitant buying the Form 3 looking back at how things went for the fuse 1. I think I’ll wait for the first user reviews and then decide.

I mean, that’s not a Formlabs event, they’re just at another event where there’s other stuff going on, can’t blame the pricing to attend on them

@David & @Walter
I’m guessing neither of you were early adopters when Formlabs was on Kickstarter. Those folks opted to back the company in the hopes of saving money for the Form1 when it went retail. One could argue they were given a loyalty discount, prior to seeing the product in the real world. Even more so since the company itself was also new.

In the present, the company isn’t new and the Form1 and Form2 have proven themselves time and time again.
I’m confident the same will be true of the Form3 that I’ve ordered the 3 and the 3L.

Formlabs could hardly be described as a start up company, my own thoughts are that it might be best for myself to wait until the printer has some real world use before buying. I don’t really want to pay for a unit that is not at the date of purchase finished. Yesterdays announcement regarding the resins showed that they still have a lot of configuration work to do. Already they have dropped ceramic resin from its material portfolio.

I do not have a twitter account and tend not to watch social media for product marketing, hence why the Formlabs “tour” that would have allowed me to see it in the UK (Free of charge) was missed. It also concerns me that I cant see it at the UK distributors yet.

I will not place an order for a new car that has not yet been finished in its production version and that I have not been able to see.

I have no doubt that the Autodesk event is worthwhile, the problem I have is that I can’t afford two days of time for the event. I certainty will not pay £800 to allow me to go and see the Form 3 and perhaps a few other things for a couple of hours.

The Formlabs ‘tour’ was at GoPrint3D in Ripon on 29th of May with a non-working Form3.

The same company will be at the Manufacturing & Supply Chain Expo, at the Ricoh Arena in Coventry on June 26th. Their advertising shows a Form3, so I would expect they will have one at that show.

Thanks for that - will try and find out if they are going to have a working one at Coventry - A pretty case is not going to inspire me to place an order!!

Formlabs has said NO UK Distributors have yet got a working printer that we can see, perhaps that will change shortly 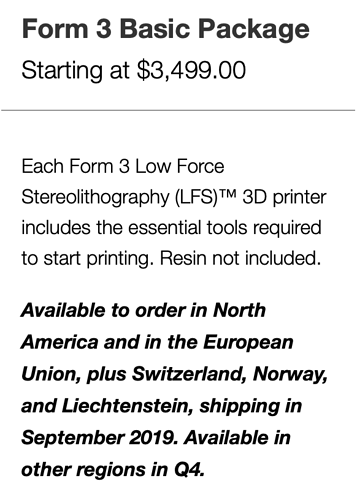 It should be said there’s a rolling lead time, rather than static. We expect anyone who ordered a printer around the time of launch(April 2nd) to receive their printers in the next couple weeks.

The lead time being extended to September is only for printers ordered today or later, rather than all printers that have been ordered so far.

Well, then I owe you guys an apology and am going to go correct the record everywhere on social media I’ve been.

Not a problem at all! Glad I was able to clear up the confusion.

Are there now any Form 3 printers available at the UK distributors so that we can see a demo now, or will they be supplied only when Formlabs ship to everyone?

Personally I have preordered Start of May, and according to the schedule I will be hopefully getting it in the next 2-4 weeks my guess until the middle of July. So I wouldn’t expect any serious F3 reviews from users before August or even September, as you have to use a product for at least a month to get an idea of it.

Myself I have been a power user of F2 for Dentistry-Orthodontics for almost 2 years, and I am confident that at least surface finish wise and perhaps a bit speed wise, the F3 will be an update for my workflow. In addition if the printer has as advertised, parts that can be replaced by the user easily (compared to F2) when something fails, that will be a major update as well for those using heavily the printer (professionals such as myself).

On the other hand how much all of the above, will be of importance for you, in order to justify an update from an F2 to an F3, depends on what you use the printer for.

my 5 cents so far before even testing the Form3.

Interesting post Demitris, you mention that you are using the Form 2 for Dentistry-Orthodontics - what resin types do you currently use?