Ability to Group parts and create a shared Build layer

I know there was a request to be able to ungroup a group of .stl when imported but how about adding the ability to group parts and used a shared Support platform.
Like many, I will usually print anywhere from 10 to 100 parts at once, I usually have Rhino open on one screen and preform on another and bring in parts when I am done with one, get my orientation ready for that part then build another in Rhino. This can go on for hours/days on end. It would sure make life easier to be able to group them all together then be able to preform a Boolean/weld of the build layer. This would save me a fair amount of resin and allow me to just throw that finished group in a package and ship.
Hope this makes sense.

So… The inverse of what I was asking for? Sounds useful - with the orthogonal operation you could split incoming groups, rearrange/reorient as needed then regroup for a shared base.

Wondering about the use case of users having intersecting meshes that make up (to them) one solid - can’t infer intent (and admittedly it’s an issue for the ungroup rather than the group).

Yep… Heck the auto arrange will cause the parts to overlap each other.

I am just like you… Sometimes I will bring in 20 parts at one time thinking I had them arrange in Rhino the way I want them realize I want to orientate just one part so I end up having to start over… Drives me nuts.

I am real happy they added .3mm Support tips though.

Hi
A group option for multiple parts would be very usefull. I have a set of glasses to be printed togheter and if they are copied the new glasses are distributed all over the built plattform and needed to be rearranged, which is very time consuming and a boring job. The support structure should be generated in common for all parts in a group, so less resin has to be used. 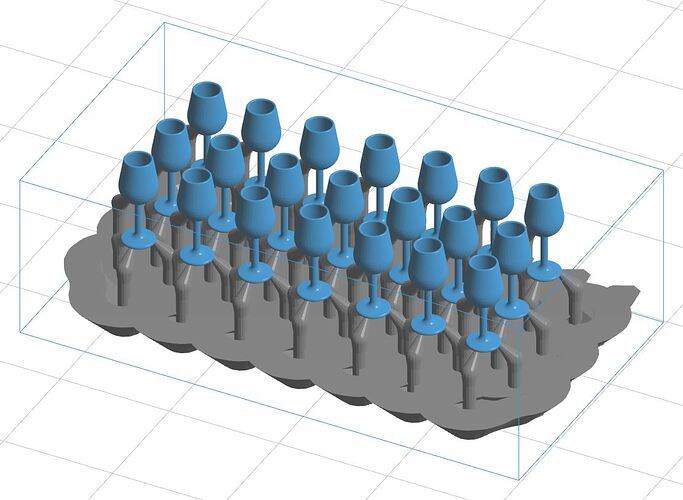