Typically, when we announce a re-formulation, it’s because we’ve made significant changes to a material. In the case of Tough Resin V4, it’s a bit different. Tough V4 will be available through our North American and International stores shortly and can be purchased in the EU thereafter.

We switched suppliers for one of the components in Tough Resin and this is the reason for the re-formulation. Mechanical properties are nearly identical for both versions and the primary difference is a more blue color. This also means that V3 and V4 can safely be mixed. If you have a currently existing tank of Tough V3, you can safely insert and print with a new cartridge of V4. The ability to combine different formulation versions is a unique situation and won’t work for other materials. 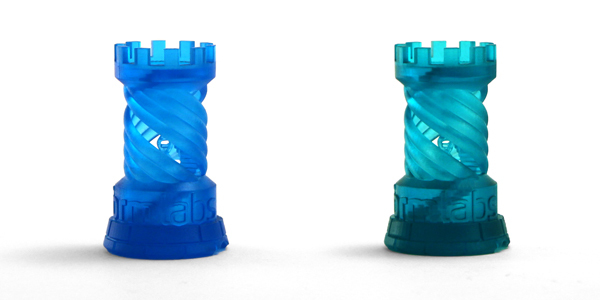 Do not like the color. Too bright. Not unique enough, look like cheapest PLA filament. Have you work on the smell by the way ?

I liked it hope the print quality has improved!

We print almost exclusively in Tough resin for our application. v4 appears to have a significantly lower modulus than v3 and is more susceptible to creep. Cantilevered structures deform just sitting on your desk. Is anyone else having a similar experience?

For reference we are using the Form 2 and post-cure for 2 hours under a 40W, 405nm LED light source.

I have found the newer versions of Tough are too far out of tolerance due to shrinkage compared to the original formulation, I have spoken to support about it. I don’t tend to offer it to clients now if tolerances are critical.

For me the tough resin is to brittle. Which is weird because it’s called tough resin. My parts shatter on impact.

I had the creep problems with V2, but V3 is better… I hope V4 isn’t more like V2. That was not usable because of tolerance and creep.

I must admit I to was amazed how brittle it is when properly cured, a sample part fell on the floor and shattered! As it was supposed to be ABS like it I had hoped for more impact resistance.

V3, I switched to Durable before the change to V4.

Did the “shattering” originate at an interior corner? I found the Tough v2 resin to be uncommonly vulnerable to that sort of fracture.

I have a heart-shaped model that had a stress-concentration point where the two lobes came together, and I didn’t bother filleting my test models–they’re just prototypes, right? When I built it in Tough v2 all of the prototypes spontaneously fractured at that sharp interior angle, every single one of them. I added a tiny 0.5mm fillet, and thereafter none of the models fractured.

Here’s a rough sketch to illustrate what I mean: 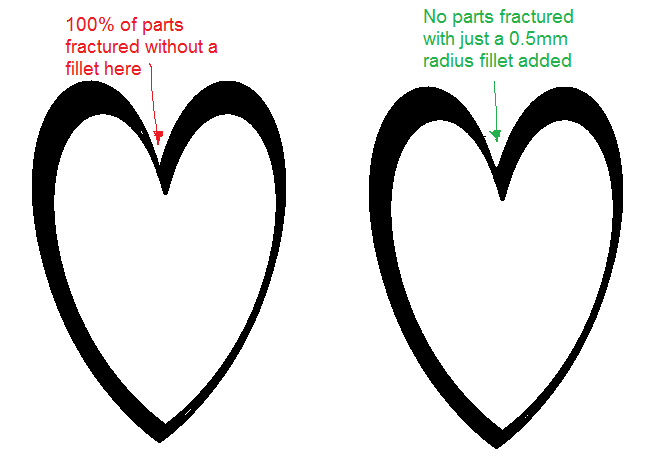 Although there might be other factors, that fillet was the principal revision I made to the model between the batches that fractured and the ones that didn’t. Wikipedia has a fairly good write-up on this topic Fillet (mechanics) - Wikipedia