If you share your stl w/ us I’ll give it a go on my Form 3 which I had disappointing results on up until the latest firmware bump when I started getting much better results.

@jbrownson, thanks for the offer. Here’s the stl. Let me know if you have any troubles downloading.

Also attached is the .form file from the latest print shown in the photos. I printed one on the mini rafts and one on the full raft to see if there would be a difference. Both are in the file. They both showed the same issues.

I’ll print this out sometime tomorrow after the current print finishes and I can update the firmware.

Thank you for sharing the .form and .stl

@TravisRogers Thanks for posting the STL/Form file. I’m going to run this print on both my Form 2 and Form 3 tomorrow morning, in Clear.

Here are my results. I used your .form file, but in black. It’s in .5 like your file.

I do think it’s a bit over supported. I’ve been experimenting w/ supports as low as .25 with a lot of success. I’m trying it again now w/ my own supports. I find my results w/ black and grey are very similar. I’m low on grey at the moment, but should have more coming in a day or two.

I think the result is pretty good. Are you washing thoroughly? Initially I just used the wash buckets, but the Form Wash is totally worth it. Uncured resin can stick to the part, especially in the holes like these and then cure. 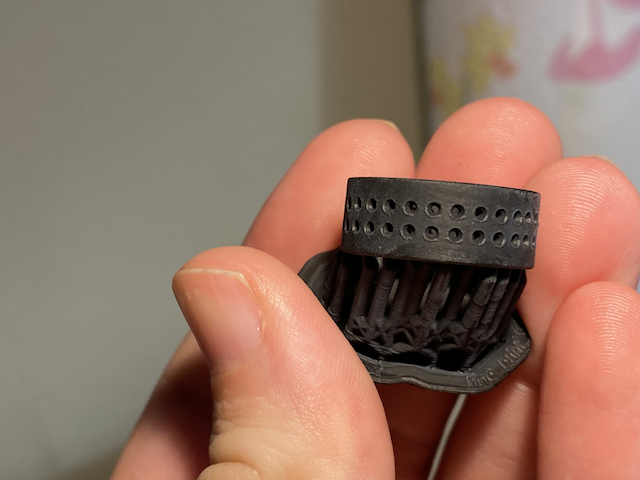 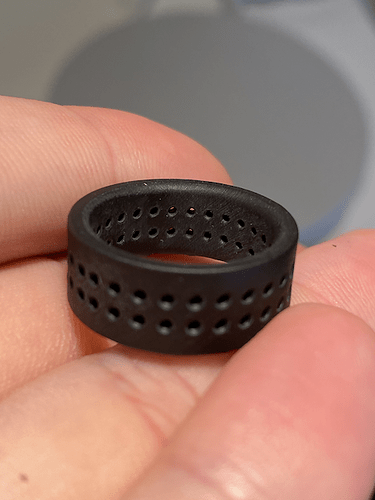 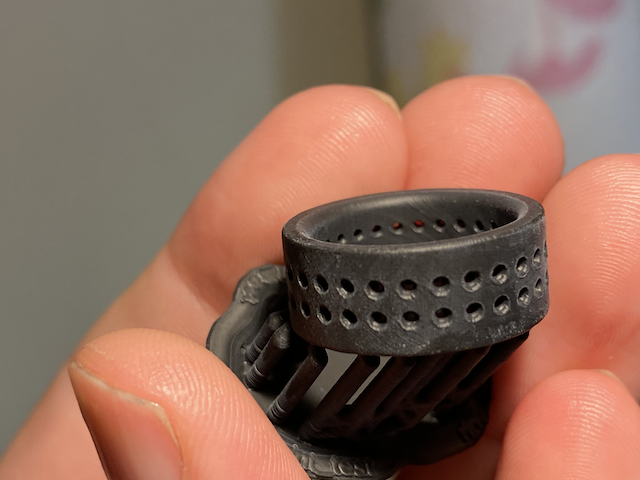 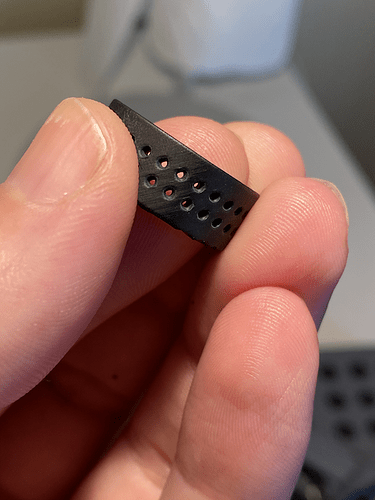 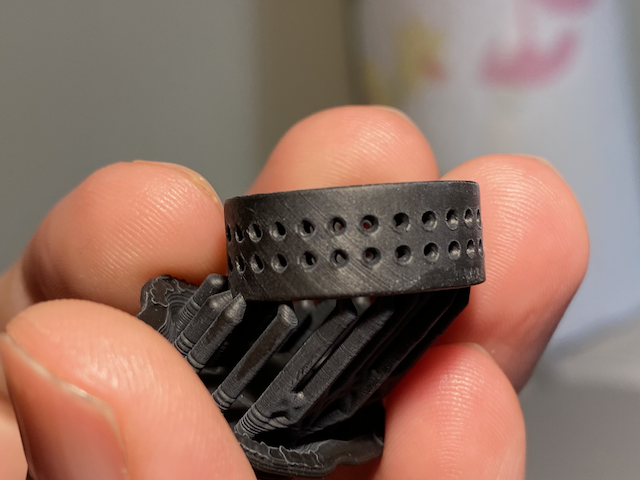 Thanks @jbrownson, it seems like the black resolves better than the grey in this case. It looks like you’re still getting a little deformation inline with the build plane on the holes that are perpendicular to the tray, but it’s much less than I’m seeing with the grey. It’s also interesting to see that you get the little raised lip around the holes. I noticed some of that on my print as well. I did get confirmation back from Formlabs support that this behavior is not abnormal:

For several specific types of print—especially very small, intricate detail with sharp corners—the Form 3 is also much more messy now than it will be. Currently these tiny features may be rounded, imprecise, or “smudgy.” We’re doing continuous work on improving laser control algorithms and material settings, which should drastically improve this performance over time. For right now, small feature performance (especially negative features, i.e. holes, slits, or gaps) may actually be somewhat less precise than a top-flight Form 2.

Apparently the clear resin is the easiest for them to tune and has been the one they’ve mainly been focusing on for refinement. No ETA was given as to the schedule, I’m sure it’s just an ongoing process of tweaking laser settings to get the expected quality across all of the resin types.

it says my picture is too large and it basically confirms that the droopiness on the side holes happens in the gray as well.

I printed a pair of rings each on my Form 2 and Form 3, with the latest firmware, in Clear.

The holes look good but I got some layer shifting. More detail here: Form 3 vs. Form 2 Faceoff! 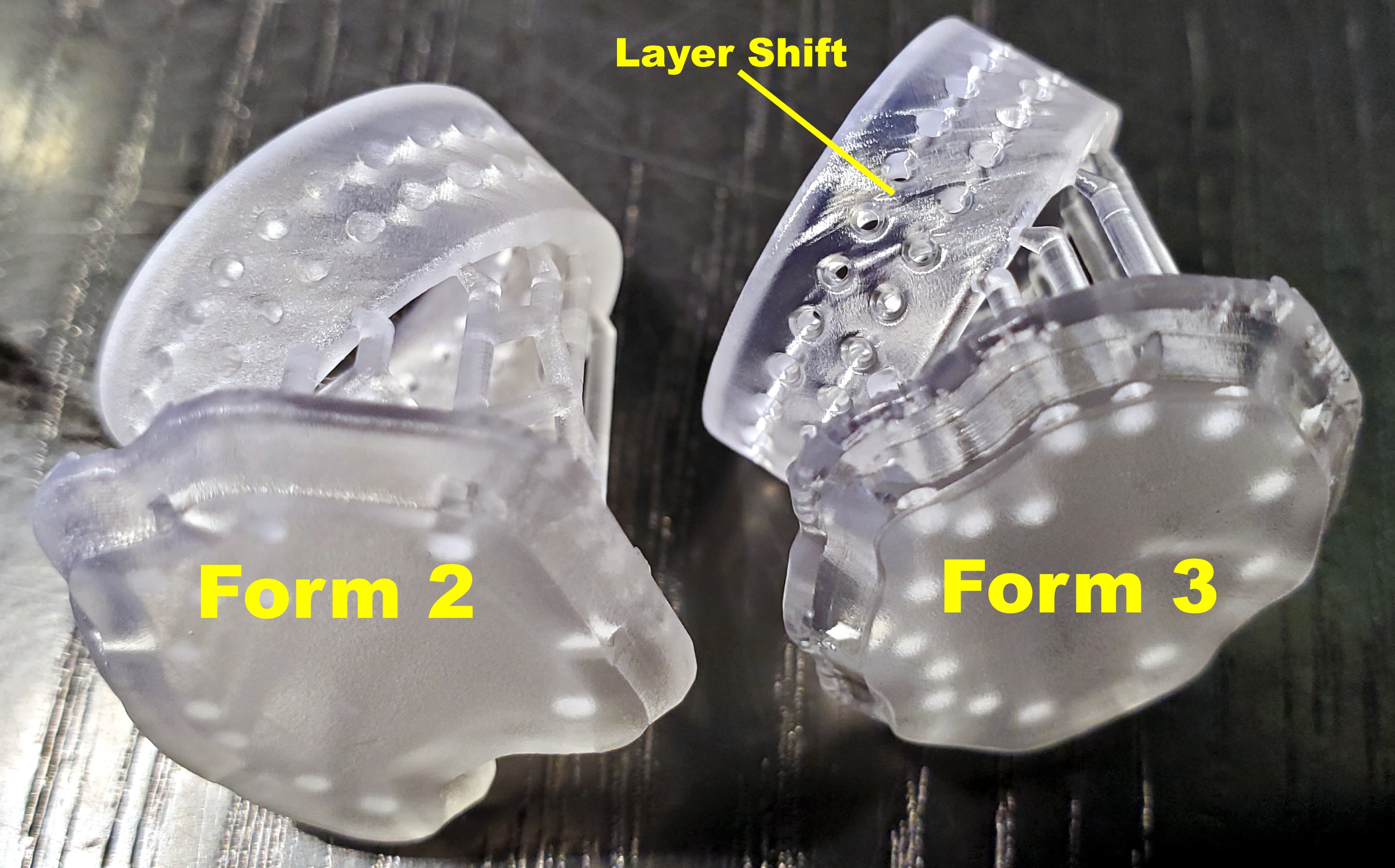 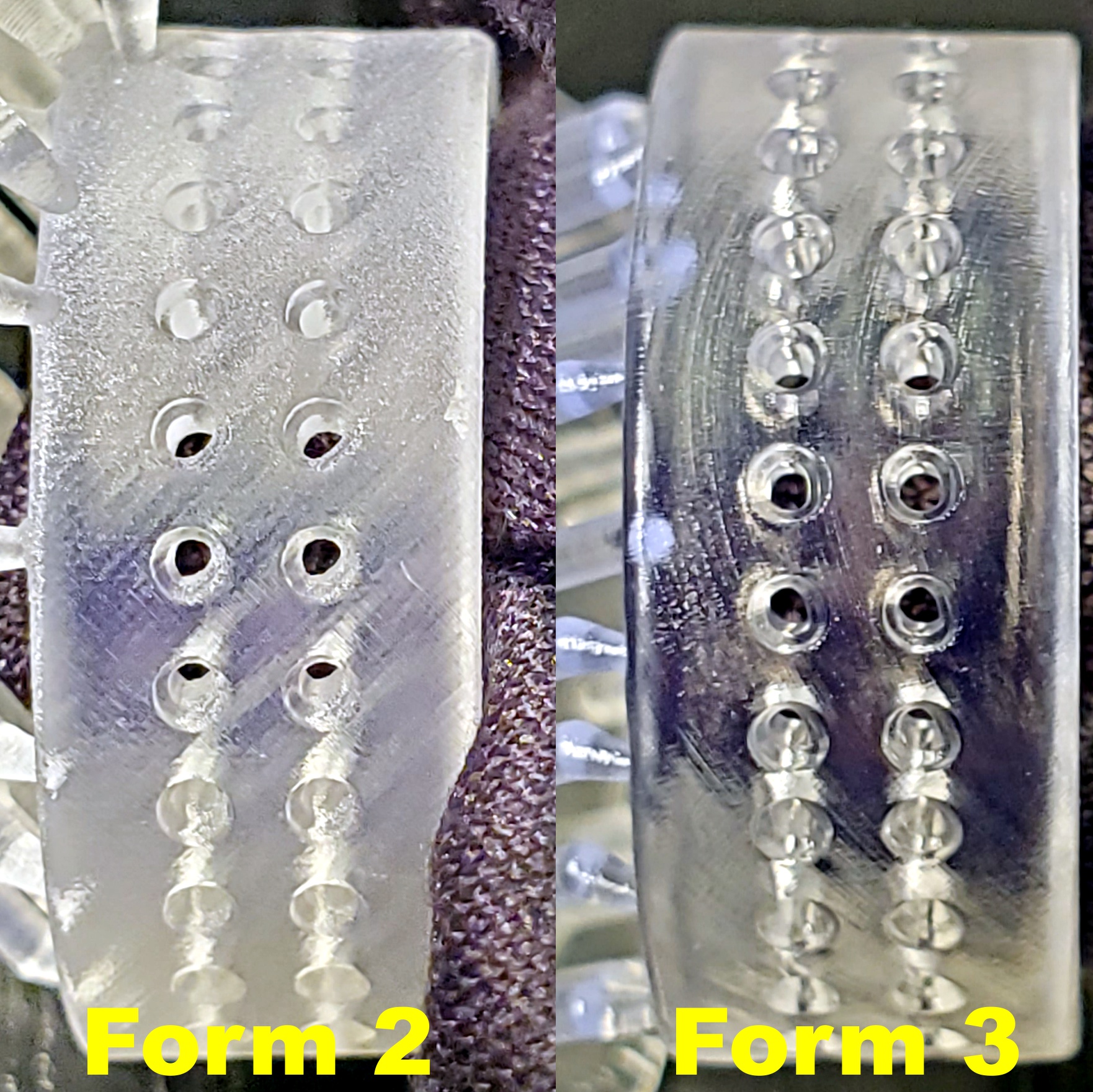 Looking at the outer edges of the part, I’m beginning to wonder if what a lot of people are calling a layer shift is actually a region of not fully cured resin that is washing out during the cleanup process. If it was a true layer shift, I would think there would be a greater discontinuity on the outer boundaries of the ring, but from the picture it appears to be continuous. To me, it looks more like erosion and distortion than a layer shift. When I think of layer shifting, I think of an FDM printer that has lost its position in one axis. This appears to happen for a while and then return to normal. If everyone agrees to refer to these artifacts as layers shifts, so be it, but I think that is a poor technical description of what is happening, and may cause difficulties in diagnosing the problem as it implies a mechanical loss of position, which doesn’t seem to be what’s happening.

Shame about the lines and blurred details, because otherwise the difference in clarity is fantastic.

Hi,
Can you check if some of the holes were printed OK (with quality and precision that satisfies you)?
From what I see you experience the parasitic resin curing effect - the residual resin that stays in holes or on shallow surfaces becomes semi cured from the parasitic light of the laser beam.

The solution is - avoid any shallow angles for surfaces facing toward the build plate and try to minimise the supports on them, angles below 45 deg tent to yield parasitic curing artefacts

Another point - when you take out the detail from the printer and you start the washing, avoid to do this near windows and direct sunlight - FormLabs didn’t warn about the light conditions during the washing but I noticed that washing the details near the windows yields artefacts like yours (residual resin becomes cured and can’t be washed). Resin is photosensitive and any residual resin exposed on strong light becomes cured very quickly and can’t be washed away.

So has this been resolved?
I recently bought the Form 3 for work. I have experienced layer shifting (or whatever the issue actually is). I have tried printing in various orientations and there are definitely optimal orientations, but it only minimizes the problem instead of fixing it. It’s been especially hard to get flat surfaces. Here is an example of castable wax and tough resin prints. I am under NDAs so I need to keep the images pretty cropped. I would expect this sort of a result with lower-priced printers, but it seems like the results should be better at the Form 3’s price.
Note- the castable wax’s model has a textured displacement map on it, so it’s not supposed to be flat… but isn’t supposed to have prominent layer lines (both were printed at minimum layer height- I believe 0.05 for tough and 0.025 for castable). The back of the tough resin print is supposed to be flat. 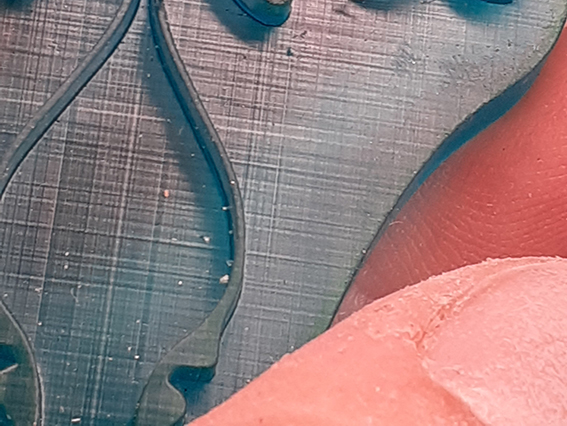 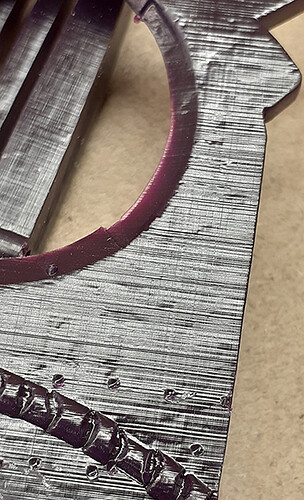