Now, first of all, the print came out beatifully. No issues whatsoever, and, unless you tilt it just so that the anisotropy of the layers shows up as texture, for all the world, it looks like an injection molded part.

That said, i’ve noticed that some supports are flexible, while some supports are super brittle. I had a few snap like a twig, into multiple segments, just from the force of cutting with an xacto knife. And other i’ve bent back and forth with no problem, and they wouldn’t break. This is all post-cure, mind you.

I’ve also noticed that, if you look very closely (so closely that i’d need a very high magnification macro shot to show it), you can see tiny dots on the surface, in places, that appear to be clumps of pigment. There’s no rhyme or reason to where they show up - just random places on the object. Some parts don’t have a single one, some will have multiple. They’re not printing artifacts, they look like someone sprinkled fine black powder on the print, and in some places, a speck or two stuck. Super tiny things.

With both of these things in mind, i think the issues people are having with Black V3/4 is due to it being way way less homogenous than the old blacks. Both the photoactivator and the pigment do not mix 100% well, even with agitation of the cartridge before printing, plus, the V3/V4’s surface tension appears to cause additional issues with the pigment (clumping).

I’ve got no solid proof for this, just a gut feeling.
This does kinda jive with the fact that V3/V4 is:

Are you noticing differences in support flexibility on the same firmware builds? We’ve tweaked the print settings a bit so that might account for the difference.

Is it possible that the specks are being introduced in the IPA? The Grey Resin will take on little white dots from a saturated and agitated IPA bath which could be similar to what’s happening here.

Are you noticing differences in support flexibility on the same firmware builds? We’ve tweaked the print settings a bit so that might account for the difference.

Is it possible that the specks are being introduced in the IPA? The Grey Resin will take on little white dots from a saturated and agitated IPA bath which could be similar to what’s happening here.

Entirely possible if the black pigment from the print can tint the specks. Or if they’re translucent enough to seem black (they were the color of the print, and this was the first time i’ve washed a black print in that IPA).

By the way, the print itself was flexible enough to allow a snap fit of a PCB inside the holder, but at the same time, when i screwed a push button inside s hole in the middle of it, it somehow chipped a thin chip off the inner wall.

So it’s either both flexible and brittle at the same time, or some parts end up more brittle, and some less.

It’s a very fine orange peel - so fine i initially thought it was a texture that’s a part of the object i was given to print. But nope, object is completely smooth (and has a ton of polys exactly because it’s supposed to be smooth).

Did two test prints at 0.05mm, one has orange peel on one side, the other on the other. Both oriented the same in Y and Z, one’s tilted slightly forwards on X (it’s a figurine, so tipped face-towards-floor slightly), the other was completely vertical. The orange peel is visible on left side on one, and the right on the other. So no correlation with orientation.

Also, straight-vertical parts of the print (legs and part of the torso) have noticeable peel lines, while rounded parts (the head) do not. The figurine is hollow (1.5 and 1.25mm shell) so it makes absolutely no sense it’s due to peel forces. It’s got plenty of vent holes too, so not suction either. Vibration maybe - but why not on rounded parts?

On top of it all, after Wash, there’s lots of whitish/grayish “staining”, like multiple people on the forum have observed before. With used IPA and completely fresh. The only way to get rid of the staining is to rub/polish the whole print with oil, indicating it’s obviously a surface roughness effect.

All in all, can’t say i’m happy with black V3/V4 at all. It’s a major step back in practically every regard. And i still can’t shake the feeling it’s a consistency / mixing issue.

We have seen similar issues with the last litter of V3 we printed, but I didn’t have the time to analyze the parts… this is for internal tooling so I gave them a quick sanding and since then when we need mate black parts I print Grey and paint them.

Yeah, i wouldn’t obsess as much over these normally, but the client wants to use them as masters for (silicone) moulds. And since they do have some surface detail, they can’t just sand them down and be done with it.

So, speaking of specks… I’ve experienced them with fresh (out of the canister) IPA too.
But, i’ve also occasionally experienced another odd artefact: 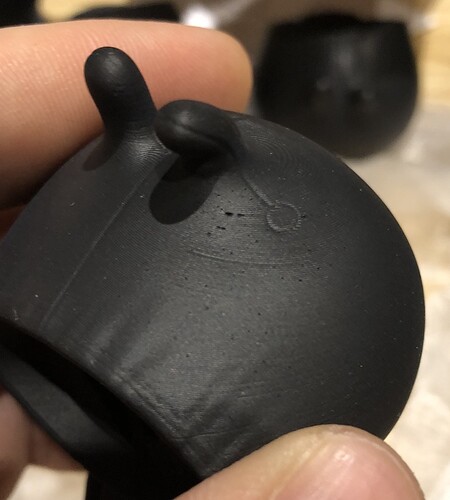 Those are pits, not specks.
And before you cry “optical path”, it’s not - sometimes these happen, sometimes they don’t, in the same place, or other places on the vat. They don’t even look like what you’d get from dirt in the optical path - they look more like tiny erosion. They only show up in places where angles are very very shallow, so i’d guess it’s caused by not enough curing of the infill of the layer below.

If i had to guess what’s happening, i’d say the bit of the infill of the layer below that gets exposed by the shallow stair-stepping isn’t cured enough, and gets eaten away by the IPA.

I remember something vaguely similar was happening years and years ago, with Form1+ and v1 of black for Form1, except back then, it was happening to flat top layers. Here’s an example from back then: 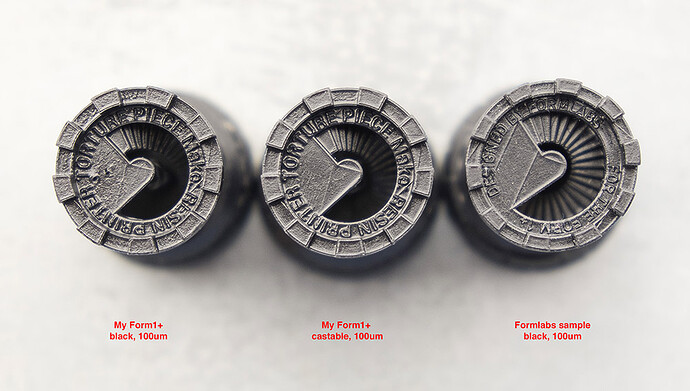 (note the holes on the first rook, near the letter T in “Torture”)

Edit: In case anyone was wondering, the issue back then really was undercuring of the infill, and it was eventually fixed by a PreForm material update.