Does it cause anyone else grief that Formlabs doesn’t show more detailed tax related information on their invoices?

By way of example here’s the bill for my Form Cure and Form Wash: 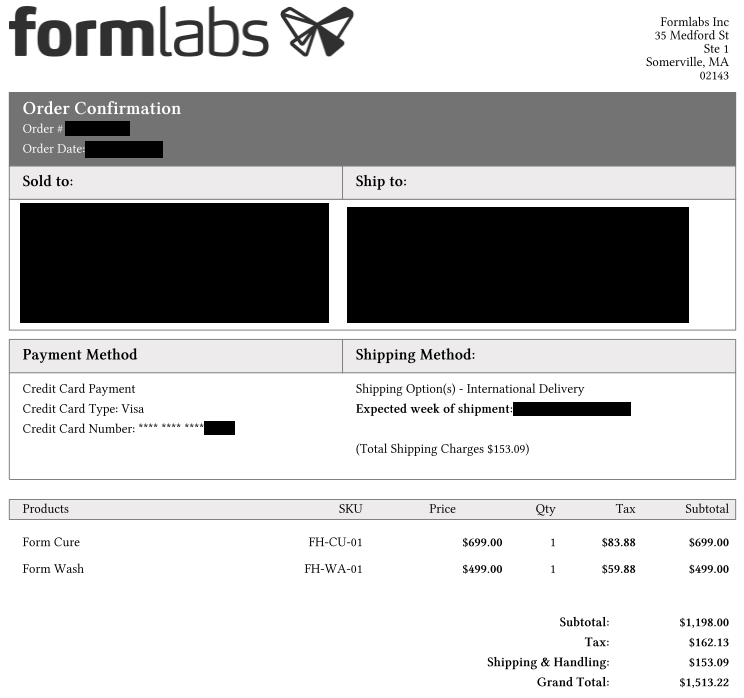 The “tax” line is somewhat ambiguous and doesn’t specify what kind of tax is being charged, or any associated registration numbers. In my case it represents two different sales taxes regulated by my country and province.

Since one of those is a value-added sales tax regime, I need to calculate out the individual amounts in order to properly account for input tax credits. This is a marginal pain, which turns into a costly pain if whoever’s doing the bookkeeping doesn’t realize it! (They might miss it completely, or overthink and figure it’s a US vendor simply self-assessing local tax on a sale). And since the registration numbers aren’t present, I imagine a grumpy auditor might push back on the ITC claims.

My country has laws regulating what information must be shown on invoices where these taxes are collected. This invoice clearly doesn’t comply with them. I realize Formlabs is a US company so jurisdiction is either non-applicable or less clear cut. But since they’re collecting tax on behalf of my governments, I’m surprised they’re not doing it right. Heck, it doesn’t even list the currency on the invoice.

Also noticed looking back on other invoices that sometimes (more recently) shipping and handling was taxed, and other times it wasn’t.

It’s pretty unusual for a US company to collect sales tax on behalf of other international jurisdictions and I recognize they do this so so their customers don’t get hit with additional import fees / delays (which used to be the case long ago).

I did open a support ticket about the issue. I’m wondering if I’m the only one here who thinks there’s a problem / inconvenience with the existing invoice template.

Do people in other countries have similar woes?