@gtl
Thanks for the information.
Yes, I am. Unfortunately, it can’t solve this print quality issue. The fan off function during idle status is much better.
I am looking forward to any better result on the upcoming update of PreForm and firmware.

It should have all been done before the machine was released…now we are all guinea pigs for testing resin at $150/L with sup-par results. The management has not learned past lessons, and rushed this machine out to beat some competitors, likely…without bothering to get the settings right for the small subset of resins you can actually use on the Form. 3. If you haven’t bought a Form3 yet, I would wait. Especially if you have a Form2 that’s working. The Form3 is not ready for serious work yet.

I submitted a support ticket concerning this issue and was told that the problem is software settings and it is being actively worked on. Hopefully this will be fixed soon.

Printed some of mine, in grey, with latest fw and preform here:

Here we go: [image] Left to right - 50um slits along the LPU motion axis; 100um along; 50um perpendicular [image] All positive features i’ve checked measure as they should / dead on.

For anyone interested: I had a long and helpful conversation with a couple Formlabs employees late last week in regards to my Form 3 and 3L preorder. I highlighted this thread, along with @Ante_Vukorepa’s PoisedWhale reporting for duty and @TravisRogers’ print with fine holes. I know Formlabs is working hard to tune print quality, but I think they could do more to make that effort visible in the forums. I suggested they reach out to you guys (along with others who are graciously volunteering their time, resin, equipment, etc. to produce all these test prints), work with you to recreate and diagnose the issues you’re seeing, and push out updates targeting improvements, with the ultimate goal of helping you achieve better results.

I’m a little nervous since based on what I’ve seen here, the Form 3 does not appear to be unequivocally better than a Form 2, and it looks like there may have been some regressions. I would like nothing better than to see you guys reprinting these tests on an updated Preform / firmware with perfect results. I asked them to HOLD my order in the meantime.

I don’t blame people who are frustrated; I agree the issues being encountered should have been detected and corrected before it shipped.

I do think it’s clear they invested a ton of improvement into the hardware platform in the Form 3 and I feel like it ought to be capable of exceeding what came before - I’m hopeful they can shake out the glitches, and I’m grateful to you guys for bearing through and churning out all those tests.

So I know this has nothing to do with the Form 3, but I thought I’d give this test print a shot on my Anycubic Photon, and I think it’s pretty darn good. The print was done @ 0.05mm, directly onto the build platform, without supports. There is a bit of a layer shift at about 0.5mm, or about 10 layers up, but it’s fine after that. This would probably not have happened if I had used supports.

All the holes are open, including the smallest one on the right. There are also horizontal holes in the square block: one square, the other round. Both are open. There are gaps between the vertical elements circle diamond square. Last but not least there seem to be some very tiny pin holes between the concentric cylinders, at 12 and 6 o’clock, but they don’t go through

Anyway, not a bad result.

I also tried to print the Fantasy Castle that some have used as a test print for details. The original was huge, so I reduced it down to 15% in size, or roughly 2.75" tall. I love this little model. It really shows off what you can do with resin printing. Every tiny spire, and arch is there.

This was hollowed out and printed at 0.05mm directly on the platform along with the 3D MON test print.

Here is the primed model. It brings out the details a lot better.

This is the detail difference between clear and dental model resin… 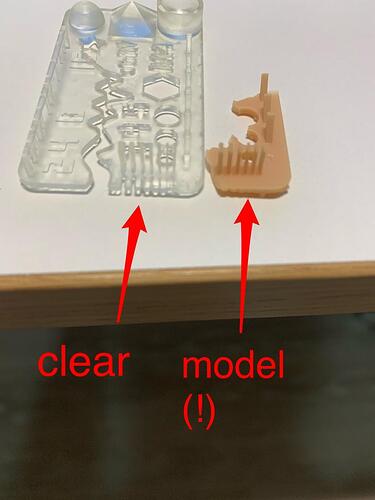 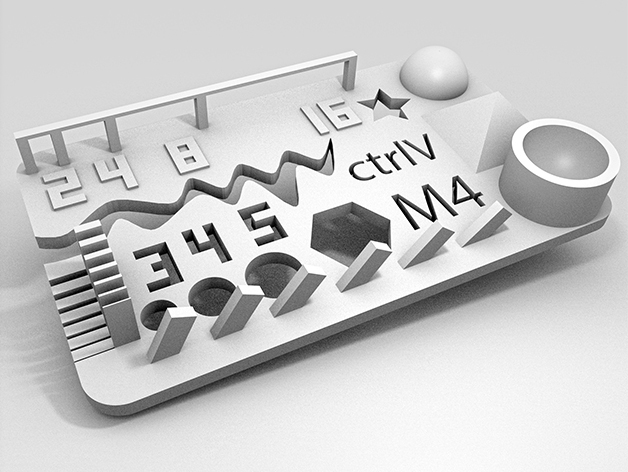 In addition to the fused slots, is Dental missing a fin?
(Um… in fact is it missing a whole lot more?)

BTW have you printed much in Clear? If we’re just talking about that resin, would you say the Form 3 gives better results than the Form 2?

Formlabs did a whole slew of testing and validation for Dental Model when it came out for the Form 2. I recall they printed dentures or something, and then 3D scanned them using high-accuracy equipment and calculated mean and max deviations.

I’d like to see them do the same accuracy tests for the Form 3 and share the results.

@rkagerer: well observed, but this issue with the fin was probably me, trying to tear the print from the raft which then fell in pieces…
Because I work in the dental business and precision is mandatory, clear is the only resin which is satisfying on the form 3 at the moment. I can say (from tests we have done with a friend of mine who has a form 2) that the same print in clear on a form 3 looks better than in dental resin on a form 2. So at least clear resin is ready for use…very dissappointing from what I expected. Dental resin is avaiable in the preform menue, but still in beta (!) on our own risk…so it ist not usable for me at the moment.

It’s painfully slow, so much so that I’ve started looking at other resin printers that can print faster. Right now I’m waiting for a 1/2 x 1/4" piece to print, and it’s going to take at least 1.5hours. For a tiny little piece. How is this an improvement over Form 1, 1+ and 2?

I actually just ordered an Anycubic Photon S. With 3 liters of resin and the printer with free shipping came to less than $600. Obviously a far less costly option than the $3+ Form3 I have. If I can get even half decent results and faster prints from this I will be happy. If not, it’s only $600…same as just 4 liters of Formlabs’ $150/ltr resin.

Formlabs you had better move REAL FAST because these lower end printers are going to challenge you…and they are not far off in terms of quality from what I’ve seen. And are faster to boot. I just don’t see myself continuing to spend $150/ltr on resin, plus new trays for every color, and how the machine wastes ink when it thinks that the cartridge is out but there is plenty in the tray (so it won’t print).

Thanks for the heads up about a new firmware. I will give it a try too.

Ahh, the changelog for PreForm is more interesting:

Modified for the Form 3:

Result of my first print. In Clear V4 at 0.05mm layer height, direct on base with fins running parallel to wiper path, on latest firmware rc-1.4.3-462 and Preform 3.2.1. Dashboard estimated 1hr 5mins, and it actually took ~1hr 22mins. 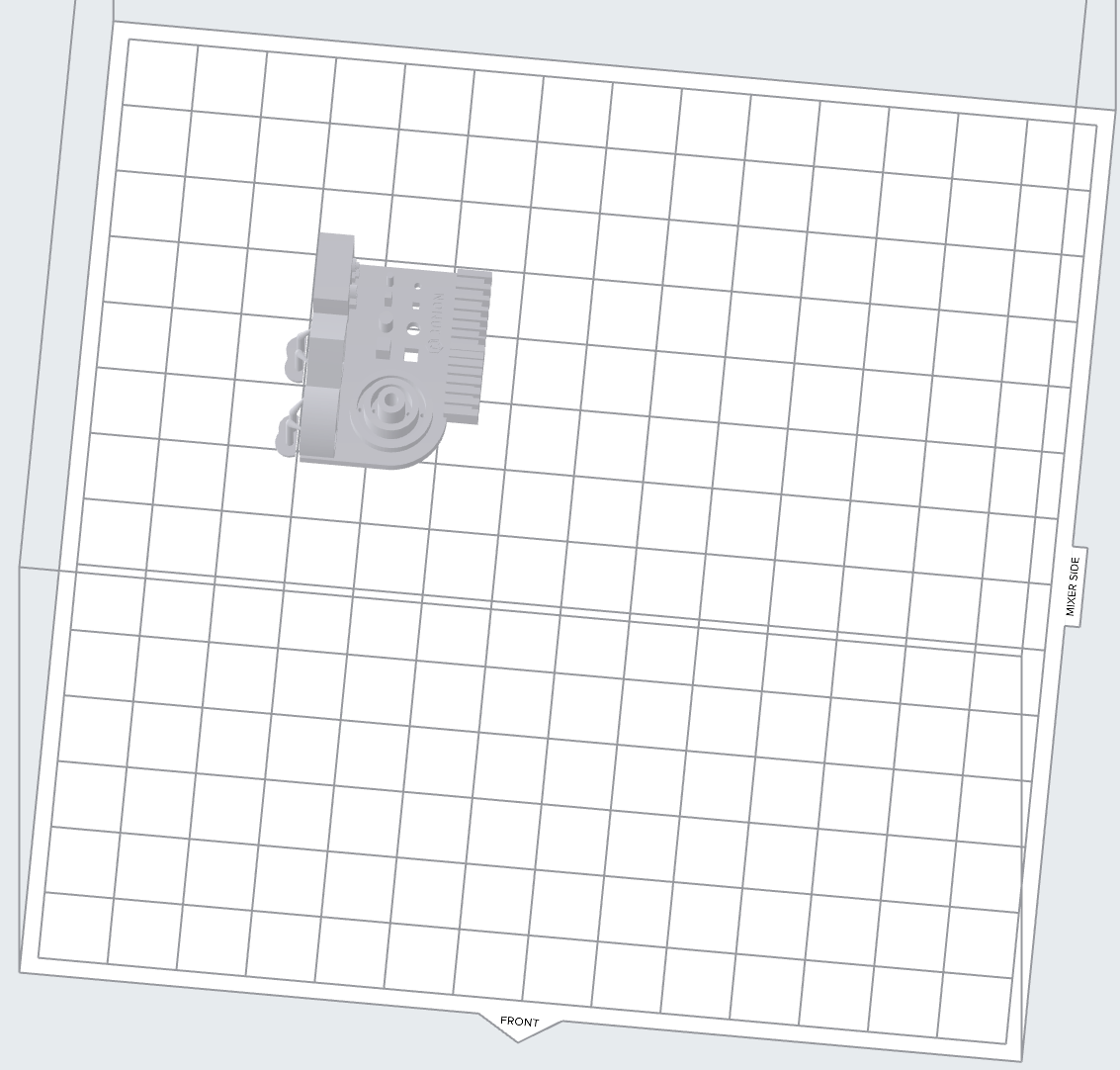 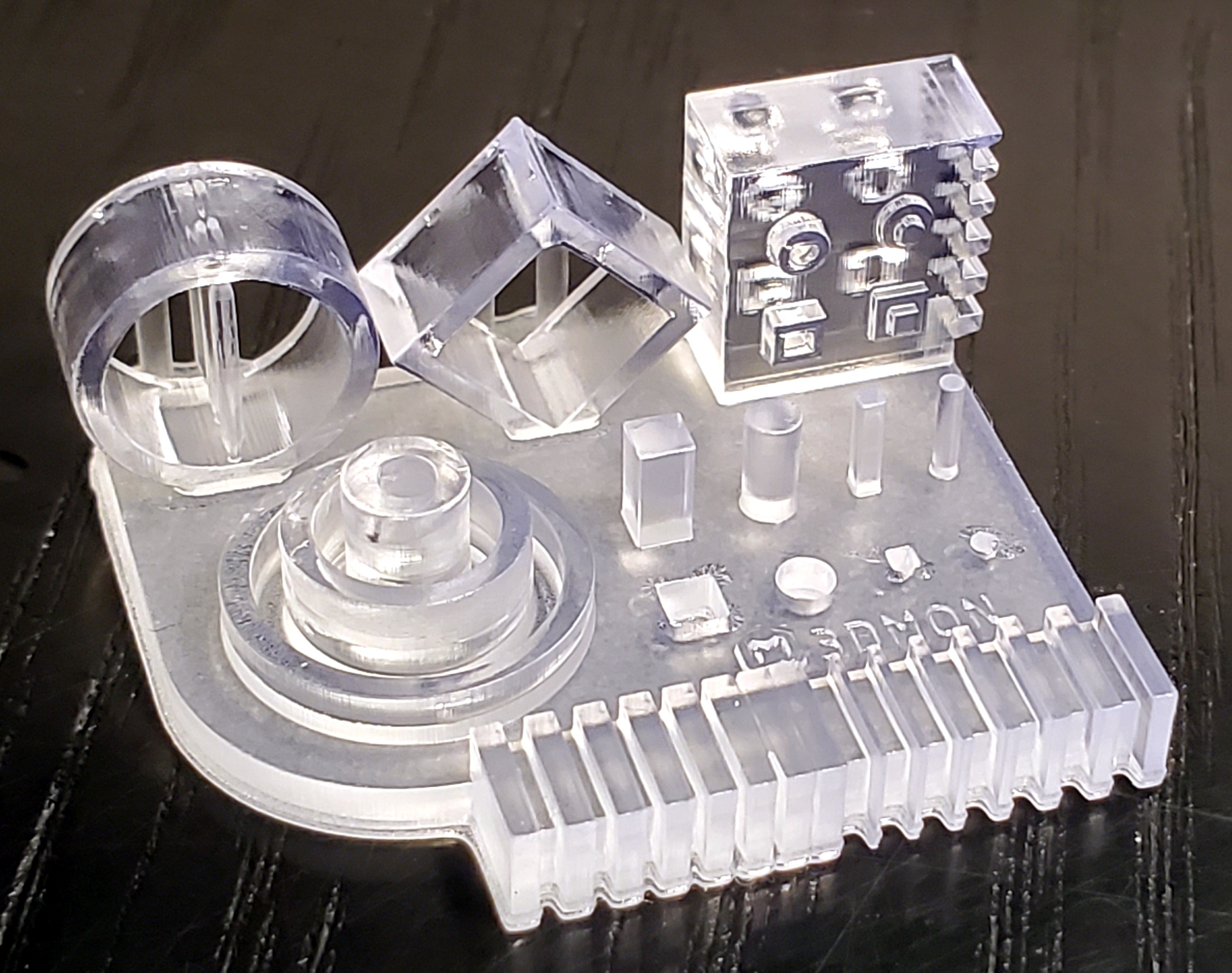 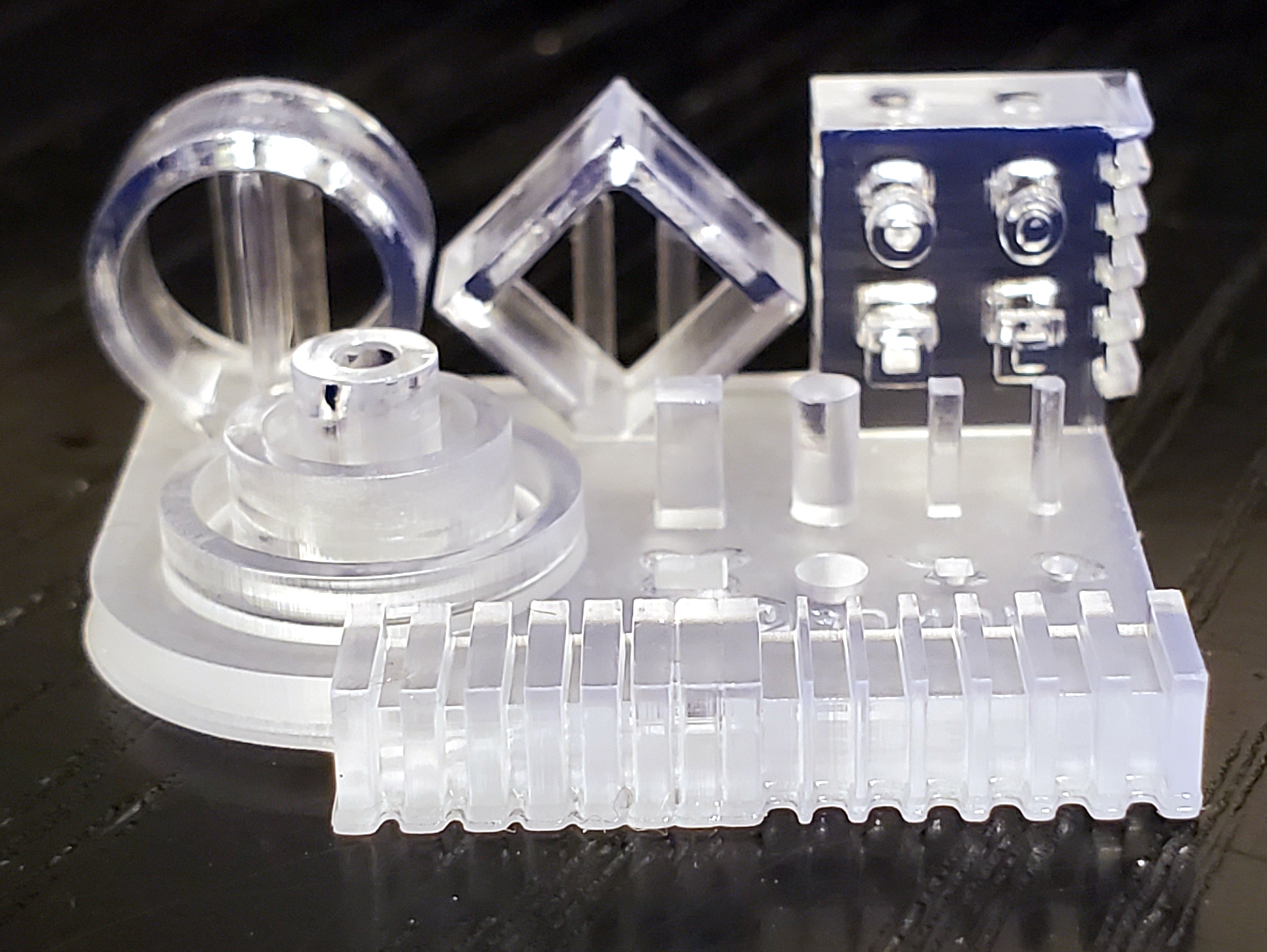 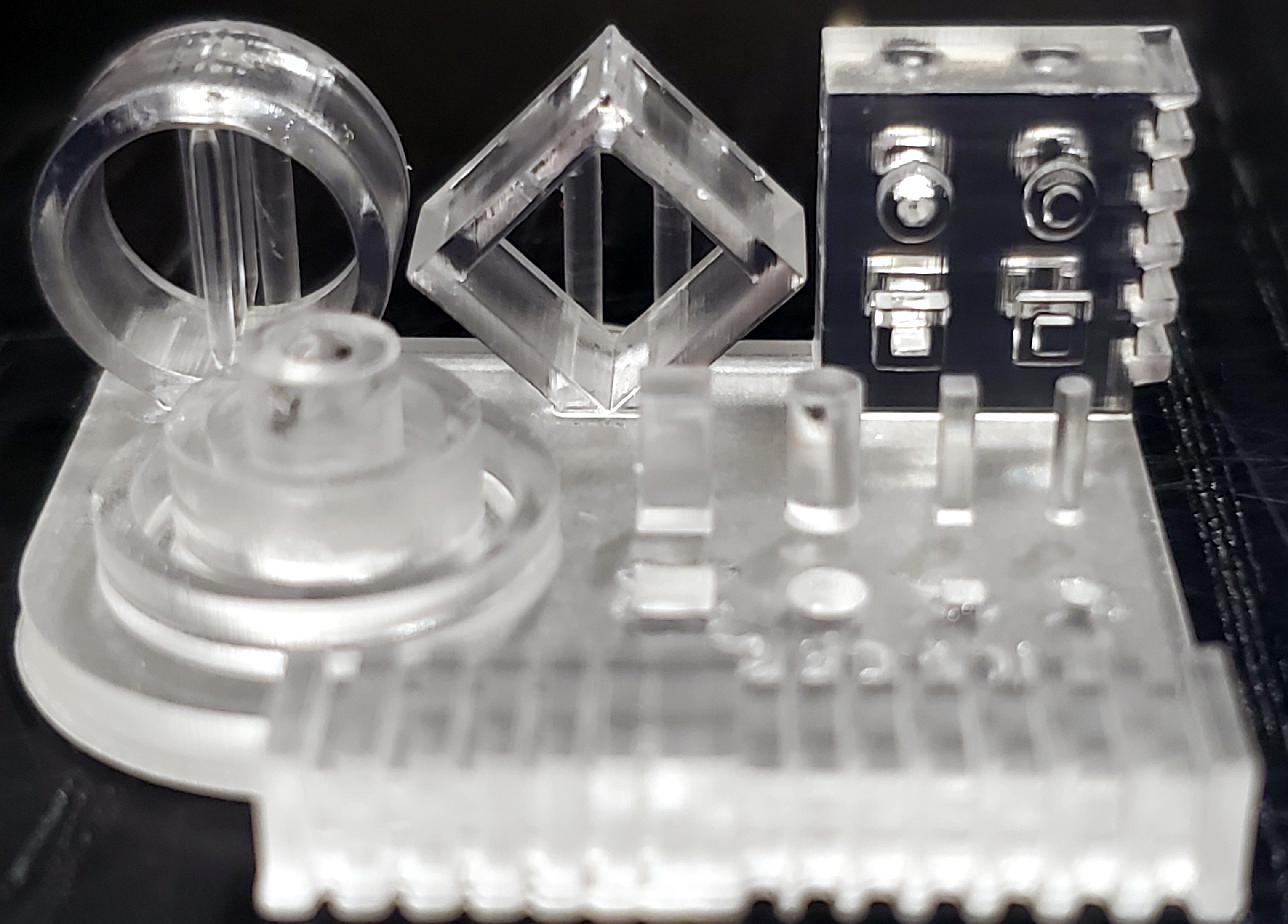 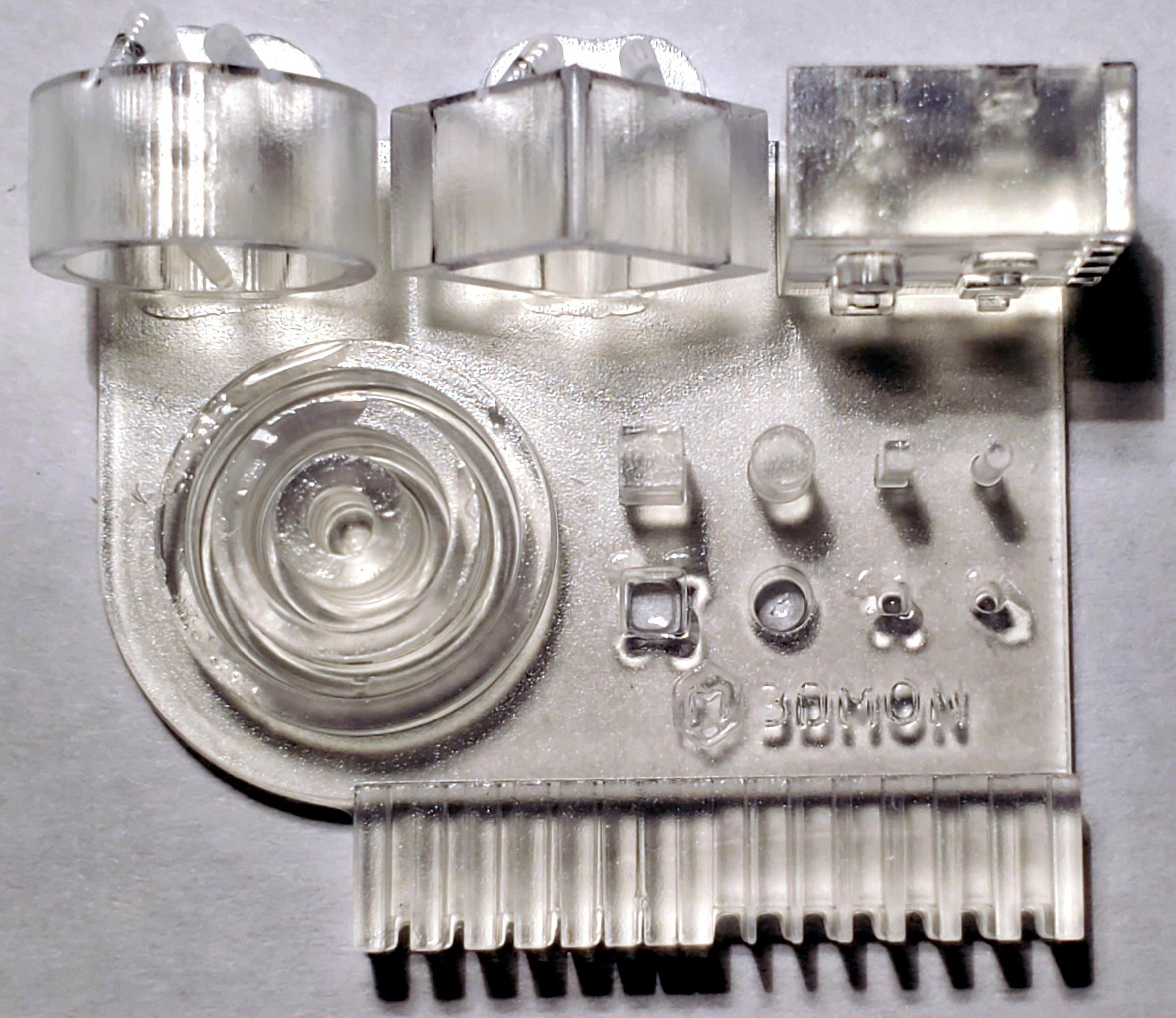 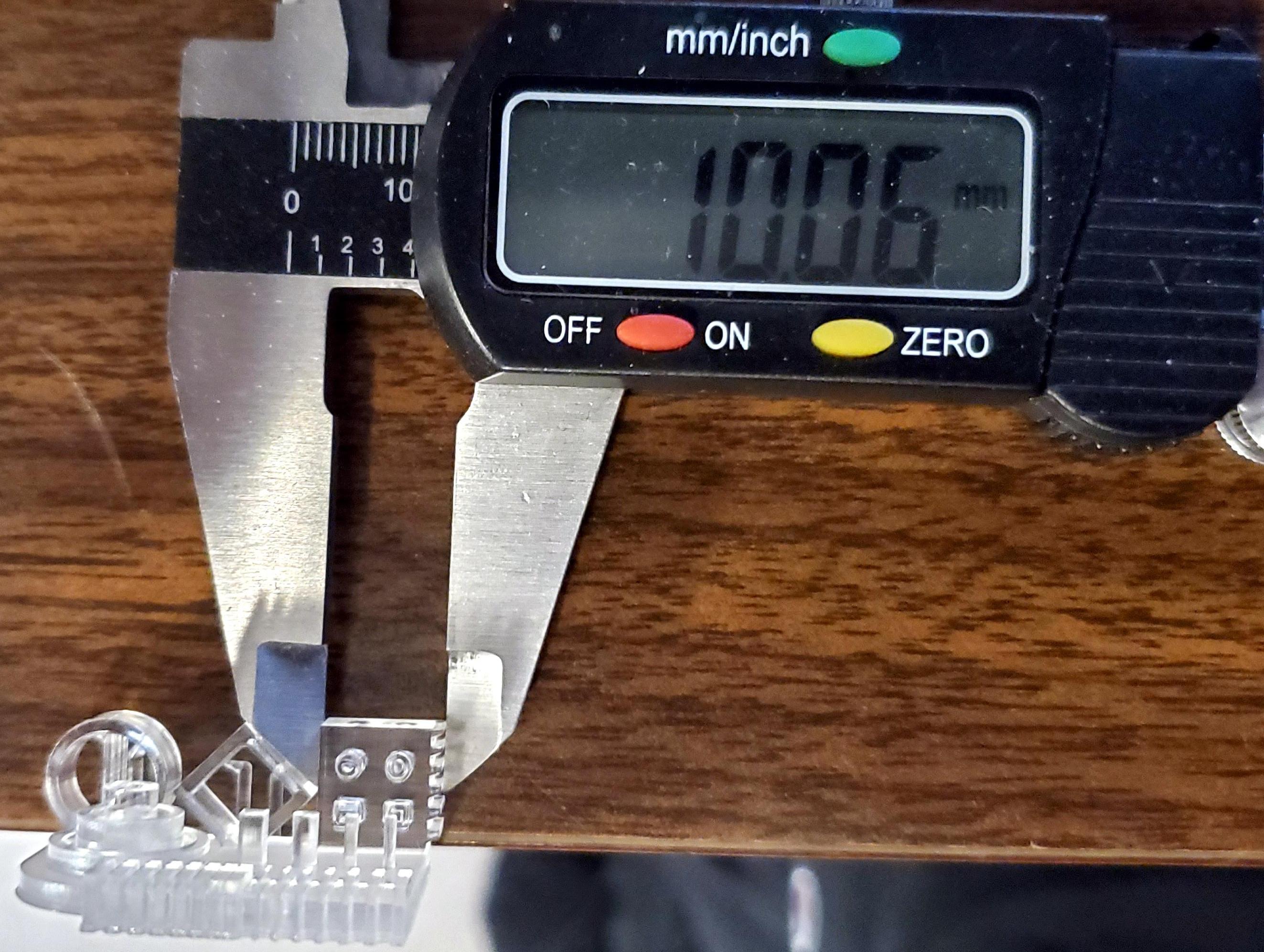 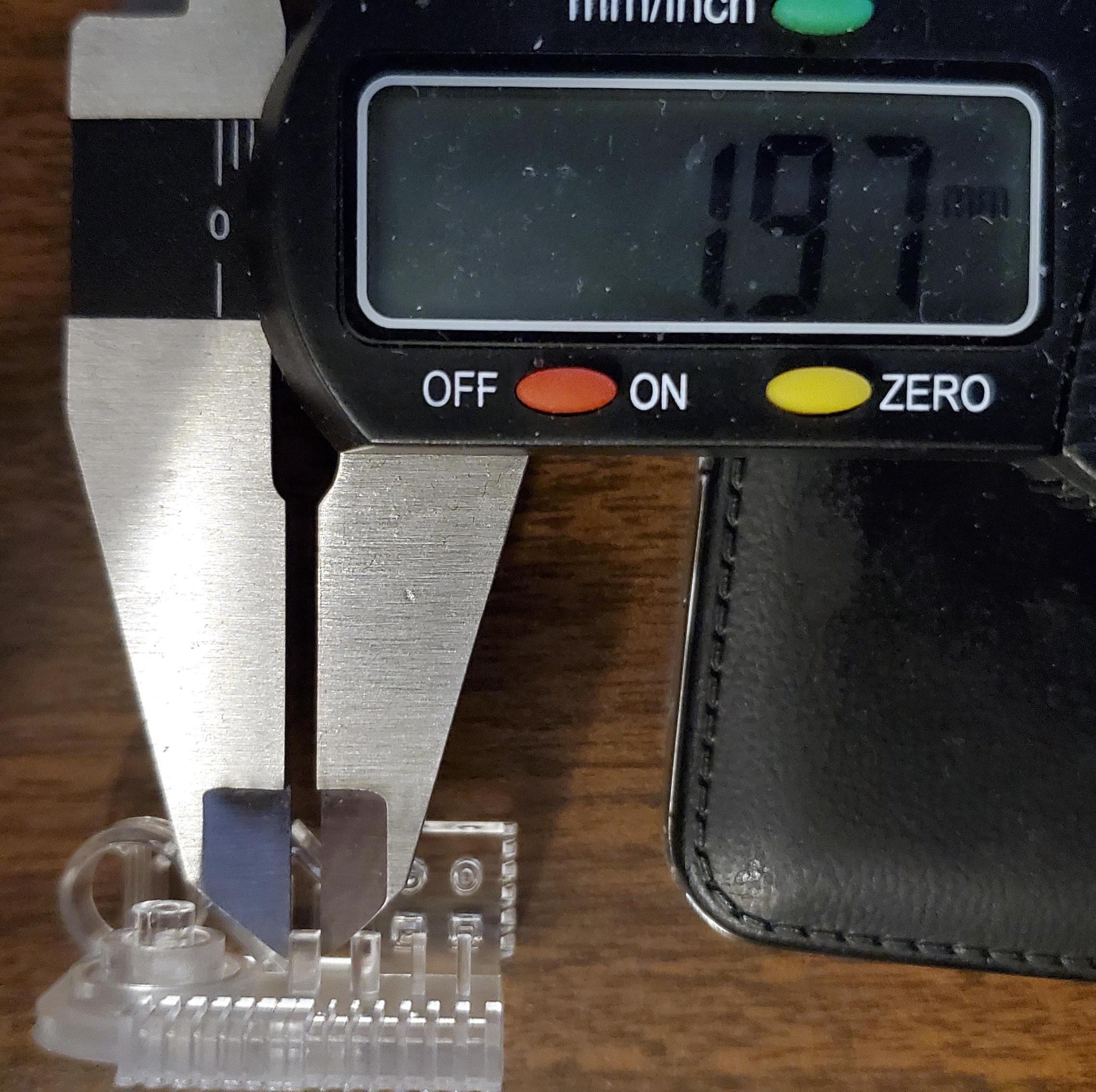 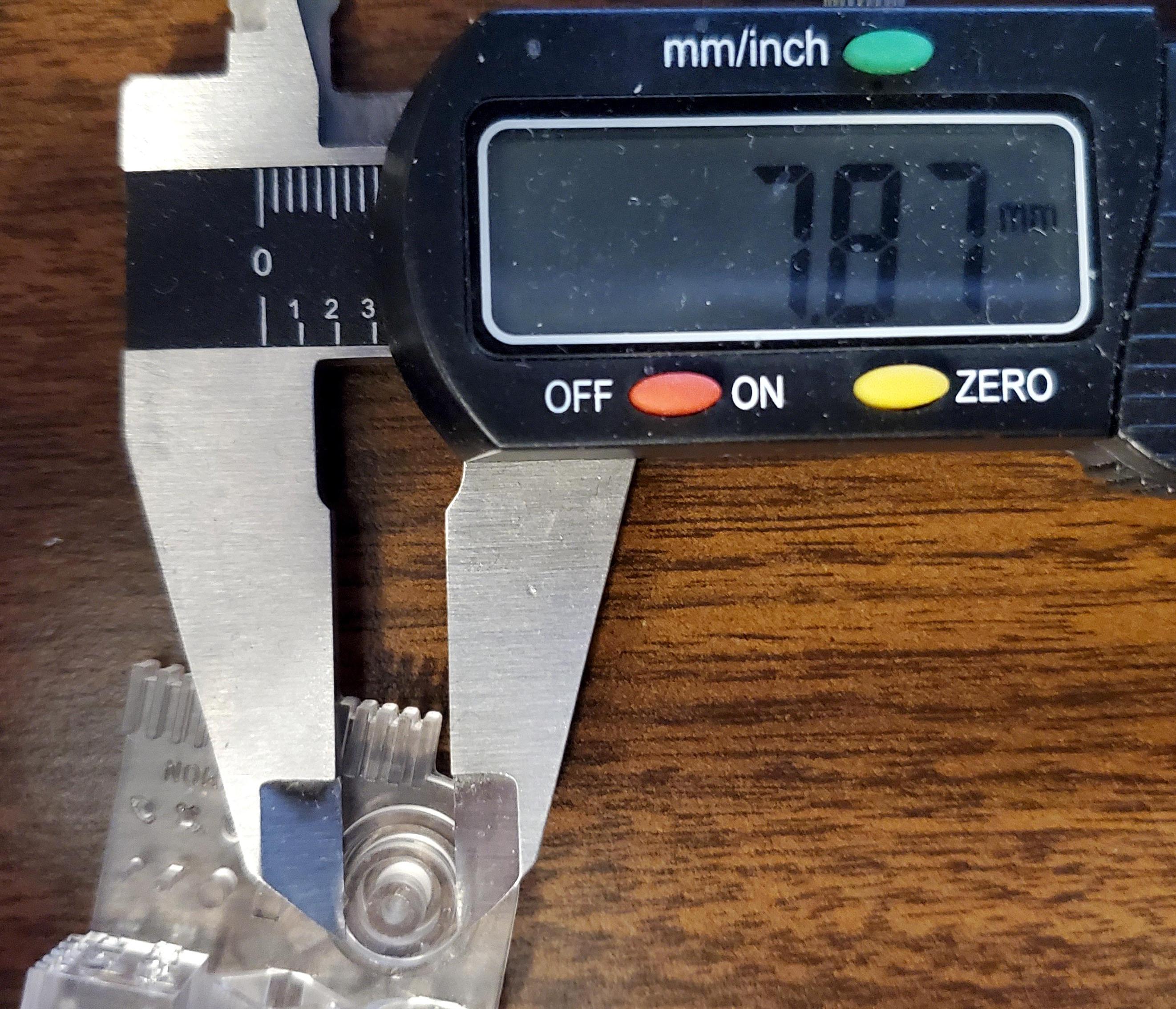 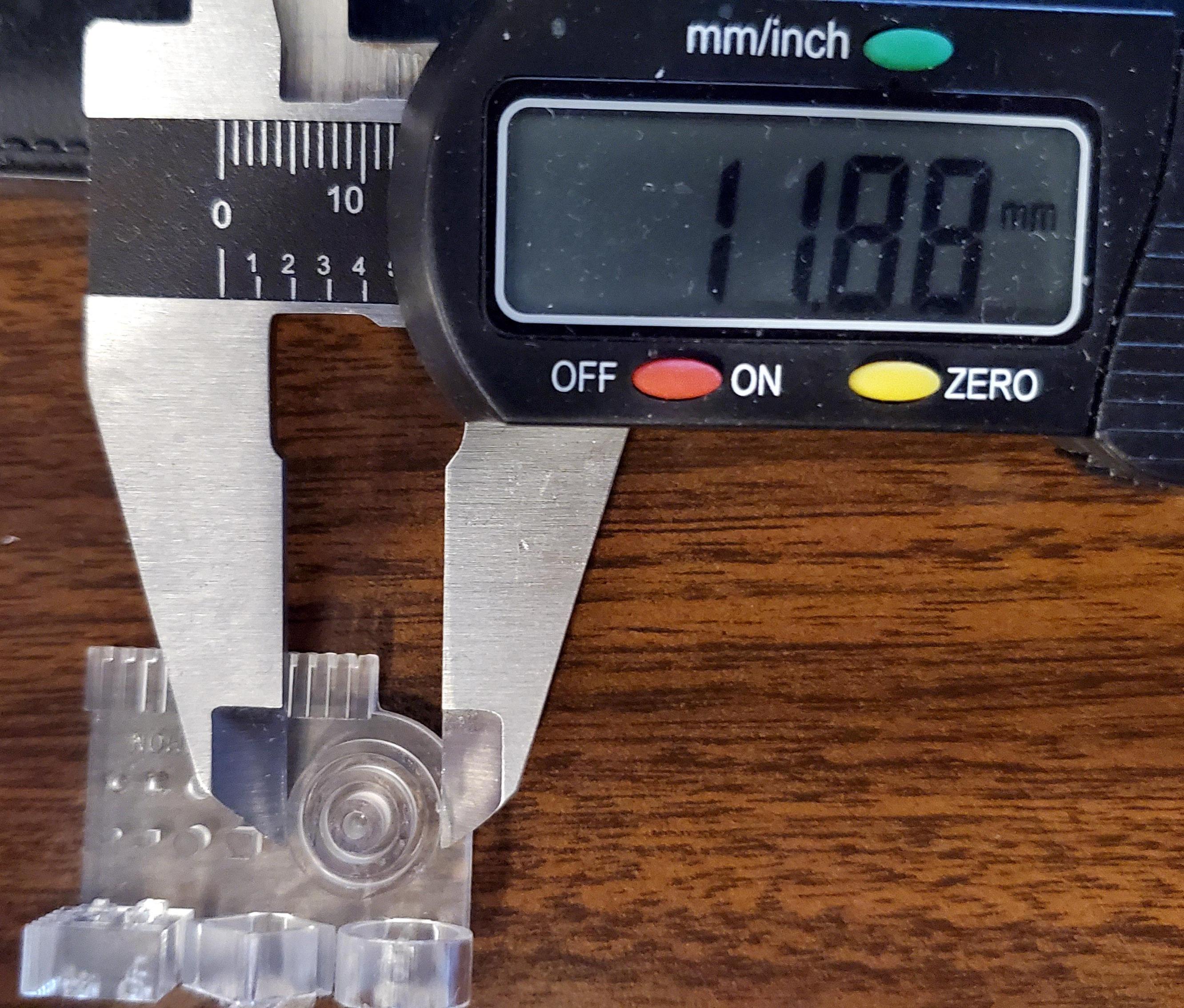 UPDATE: I ran the same print on my Form 2 and have comparison photos here: Form 3 vs. Form 2 Faceoff!

That looks pretty great. I’ve been meaning to post my latest results too. They’re muuuuch better w/ the latest firmware. 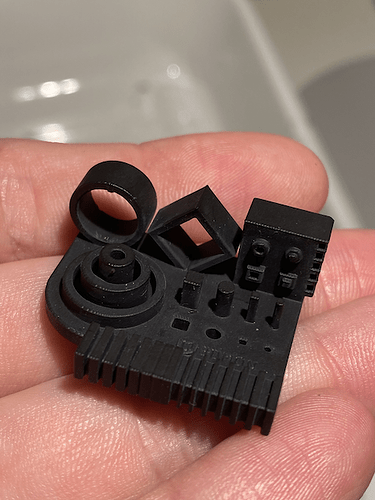 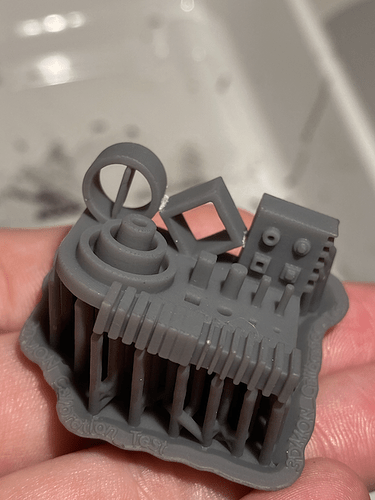 IMG_0169480×640 320 KB
This also looks pretty good. You can see the gaps in front better here and they’re much better than the previous firmware. The gaps on the diamond weren’t totally separated, this photo was taken after I ran my tweezers through there a bit. 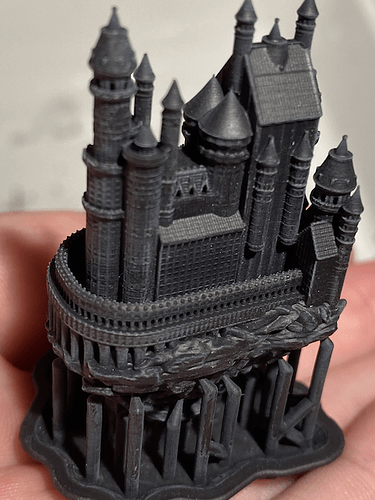 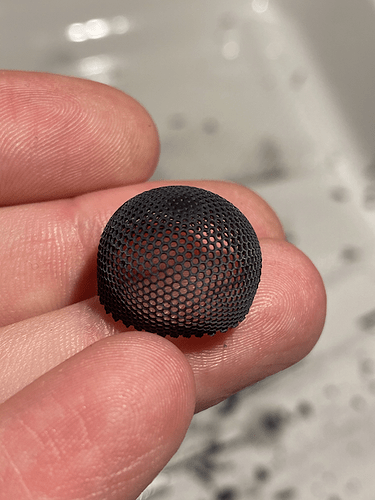 IMG_0170480×640 392 KB
Thought I’d throw this one in for fun too. Printed directly on the bed. It comes off very floppy, but after curing is actually a bit rigid. It really makes me think about just how much detail you can get w/ this printer.

So yeah, thanks FormLabs for the nice firmware update. I wonder if they’ll be able to get even more out of it w/ the next one. 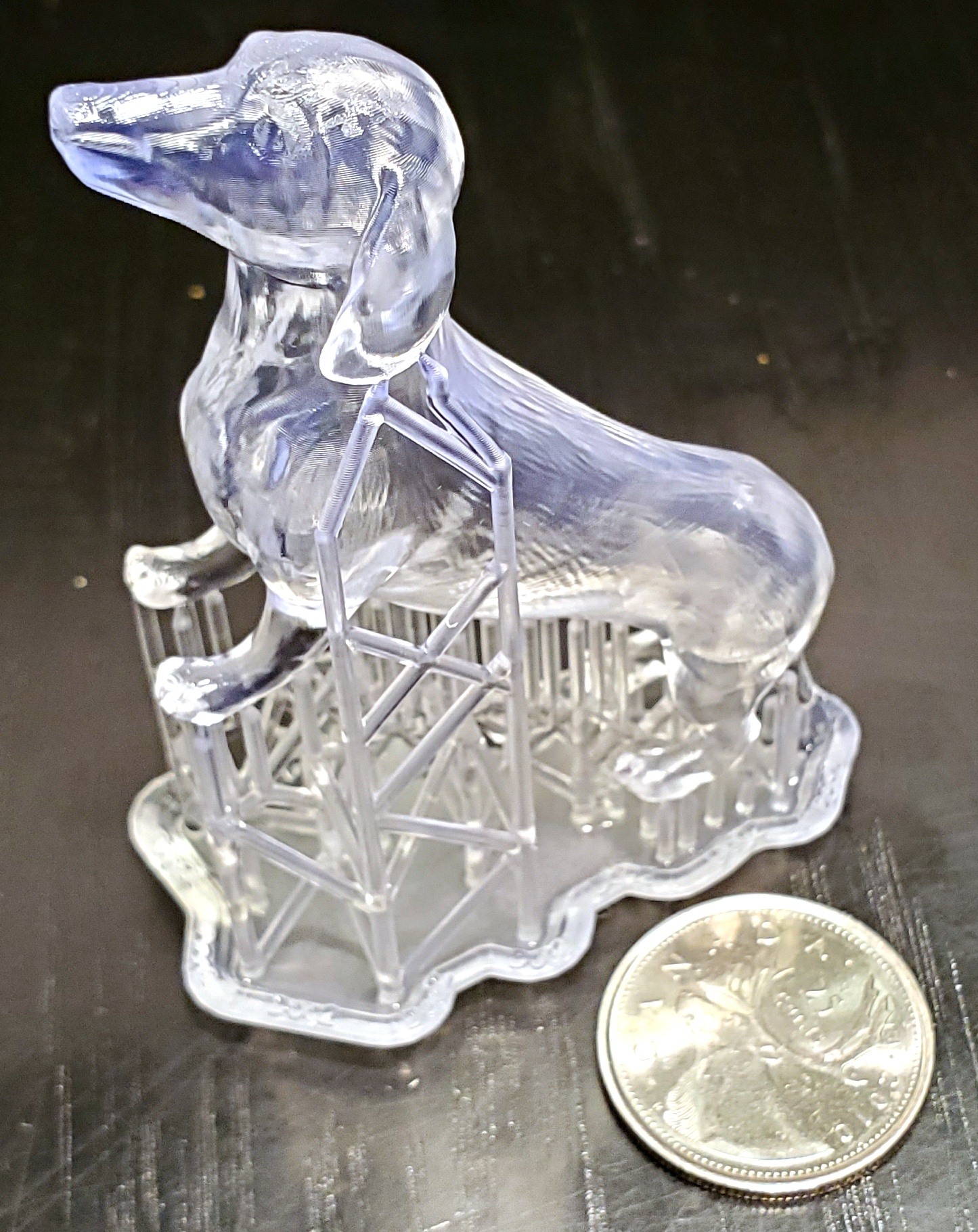 We were about to place an order for one of each of these new machines, but after months and months of woe with BravePrairie, and Black V4, we are going to postpone the order at least 6 months.
That said, both our FL2 machines are working well at the moment (probably just damned them both by saying that!!) so pressure is off. Might be in the market for a second hand clean FL2 though!! We could use the extra capacity!

I never update my gadgets from smartphone to 3D printer on latest firmware, I usually have problem when I do that, but what is the best firmware till now for Form 2?