I’m working on a project using the high-temp resin. The part is a little heat-sink and I’ve been prototyping it on and off for the last month. It had been printing fine (dozens of times), and then suddenly in the last couple of days the gaps between the “fins” have been clogged with solid resin after printing, and the holes are too small. The picture below is the “transition” part - the right side is clog-free but the left is clogged. After this, all new parts have been clogged. 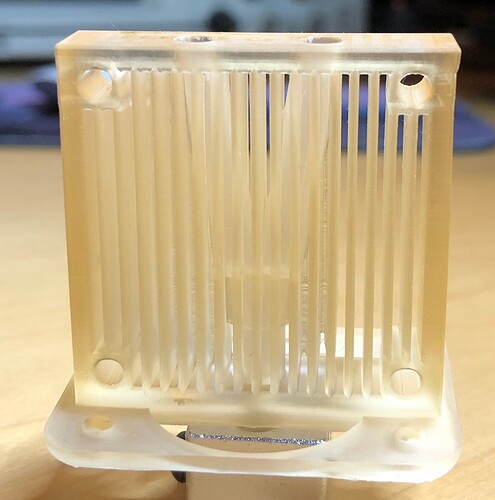 I’m going to try tweaking the x/y scaling on the printer since the part appear to be about 2% too small now, but I wondered if anyone had any other ideas? The same resin and tank were used for all test, and I’ve made sure to use fresh areas of the tank. If it is scaling, why would that suddenly have changed? This is brand new machine (just recently replaced for a faulty one).

Make sure to stir the resin if you aren’t printing for a while. for that part it would also help if the grill is facing to the side so that after each layer when it slides the tray over that the movement of the resin will align with those grills so that it can try to flush some of the resin out from between them. The issue can happen when resin doesn’t move enough because there’s going to be a little bit of bloom around where the laser hits and if there’s excess resin on the outside that’s in a position where it’s not moving then the repeated exposure from each layer printing can cure that extra resin. Also make sure that you’re rinsing the resin off well in IPA after printing. Your IPA might also have too much of the resin residue in it, you can try rinsing it in another container of clean IPA after rinsing in the first container.

Were you able to try this with a fresh tank? Clouding could produce effects like these and High Temperature Resin is a bit more aggressive with the PDMS. If you’re confident that clouding isn’t the cause here, I’d recommend opening a ticket with our support team so that we can troubleshoot this with you.

I’ve tried rotating the piece because I though the resin movement might help, but it’s made no difference. I also thought about the IPA (my initial bath is quite cloudy and I should change it), but checking the part with a scalpel straight off the printer and the gaps are already solidified.

I dont have a fresh tank to hand (still waiting on those long-life tanks to ship) but I have tried to use the heat map to place the part on unused tray. The tank marks from printing are very noticeable with this resin so I’ve tried to take that into account. What’s weird is how I had zero issues with this 3 weeks ago, and now it fails regardless of what I’ve tried.

It sounds like clouding may be the issue and High Temperature Resin does cloud tanks a bit more quickly than the standard materials. Can you take a picture of your tank against a dark surface? The heatmaps in dashboard are a great reference but taking a look at the PDMS layer is more reliable for determining whether or not there’s a problematic amount of clouding.

So in the end I just tweak the spacing of the part to make it print how I needed. Perhaps not the best solution, but i needed to make progress with the project so it was expedient.