There are no “fumes” to speak of, if anything, the “fumes” some people refer to are from the IPA, not the resin.

The only thing that some folks object to are the smells of some of the resins.

Some resins have very low odor, if any, other are stronger. For example most standard resins (grey, white, black) are barely noticeable, but flexible is very strong. I’m not familiar with other resins since I don’t use them, but I’m pretty sure none of them are toxic.

Okay, perhaps I won’t need a fume case, then.

From the other side, if the room you are using to place tge printer in is small or without windows, you will smell the resins. Especially while printing.

My suggestion is to start working with it and if the smell is not something that bad for you, then save the time of building a coffin

It’s a small room, but with windows. I’ll start off by placing some 4" ducting (with an in-line duct fan) near my Form 3 + wash + cure station, and pipe that air outside. Hopefully that suffices.

I can think of several ways of locating the printer in a close case. Its realy depends on how much show-of you want to give. You can build it from Perspex or Polycarbonate so it will be totaly transparent and very representative. Otherwise it can be made of wood. If the room is not occupied by people that actually sit and word beside the machine, the exhaust might be suffice for this purpose.

Keep us posted how it goes.

Smells ARE fumes.
They are vapor of actual chemicals in the resins.
If you can smell something, you are inhaling molecules of whatever it is you are smelling.

People said vaping was harmless- turns out inhaling aerosolized oils are maybe not such a good idea after all?

I Don’t trust any representation that any chemical is harmless- And methacrylates are known to be mildly toxic, causing irritation to skin, eyes, and mucus membranes.
They are a known sensitizer- meaning with regular exposure you Can develop an allergic reaction to the slightest trace of them.

Although the risk from exposure is relatively low- given how many exposures we have to everything from printer toner to car exhausts and brake lining dusts- it simply makes sense to limit that exposure as much as possible.

That said- there are other good reasons why you want your office printer in an enclosure.

You will be storing tanks of resins, cartridges of resin as well- which are additional sources of odors, but more importantly, you want the PRINTER and all tanks and resins to be as free from dust and light as possible.

So- basically, you want to not be bothered by the smell. less bothered by the noise, and help keep both dust and light away from the resins and the optics.
Might as well invest in an enclosure that can hold ALL the stuff- and filter the air to remove odors and dust.

My form2 fit perfectly in a steelcase office cabinet only 18" deep. set close to the front of the shelf, it has enough clearance to open the lid all the way while inside the cabinet- as well as the head room to insert new cartridges.
the shelves I moved to make room for the printer were put back in lower down spaced to allow for cartridges and resin tank storage.
I cut a 4" hole in the top, right next to the printer I placed a large activated charcoal filter ( the kind they sell to pot growing operations for $40 ) I ducted the outlet from the filter thru the 4" hole to a whisper quiet axial flow fan to draw the air.
In operation, the fan pulls room air thru the door seams and then thru the filter and out into the room.
There is no smell and the printer, running inside the cabinet is quieter. The massive filter lasts about 2 years for this application.

The form 3 has a different size- you would have to look at the thing and measure how much internal clearance a cabinet would have to have to allow the machine to live in there while being operated.

However- My office is rather small- and my desk right next to the cabinet housing the printer.
If your office space is large- and well ventilated- like a lot of corporate offices are- you might not need to filter out the odors if you don’t notice them.

The Grey Pro resin stinks. I think probably too many people are breathing the fumes and not using gloves when they touch the resin. I want to be as safe as possible so I use the machine next to a fume hood.

The problem I found having the machine actually inside the hood area was that the machine got really dusty. It was sucking all the dust in the entire room through that hood and the dust was sticking to the machine. I used a plastic spray cleaner that helped with the static on the Form 2 cover, but really that should be made of glass or an anti-static PC. So I moved the machine next to the opening instead of under. I still keep the resins and trays and Form Wash under the hood. Seems to work well. You just want a slight movement of air really so the room isn’t full of stagnant air. 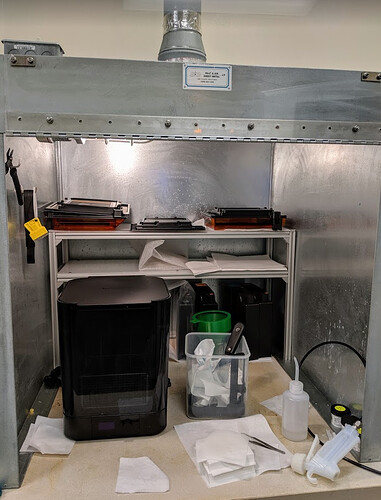 Unless you have the sense of smell of a bloodhound, you won’t need a fume case.

Go forth and print.

You do realize it isn’t only about the perceptible odor.

Given the Form3 uses air circulation to heat the resin, it has undoubtedly aerosoled some of it.
If you smell that or not is irrespective to the fact you are inhaling it.

I highly doubt any aerosol is being created by the air circulation fan. A highly vicious liquid resin would need to be forced through a small aperture at high pressure in order to generate an aerosol. Volatile components of the resin are certainly circulated by the fan though.

1 : a suspension of fine solid or liquid, particles in gas smoke, fog, and mist are aerosols.

VOC’s evaporating or otherwise being released into the air are not so dissimilar to a fog or smoke, albeit in far fewer concentrations.

Vernacular and nuance aside, if I smell it, and I do, it is being carried by the air, the same air I breath.

The fumes are deemed non-toxic according to the MSDS.

I’m wondering though if that counts fumes while it’s printing or just if you open the bottle and inhale… Certainly there’s a difference and the MSDS of the materials would be for fumes of the material without being printed.

That’s a good point you’ve raised. I have been printing with a Form2 for over a year and never had to leave the room. It is in my office and aside from the sounds, goes almost undetected.

The Form3 has been here for a week or so and twice I had to open the window. More than being offensive, my eyes felt dry/tired which is a give away that something is in the air. I’m moving this printer to a closet after a vent is installed to exhaust air directly outside.

I’m not a big poster but thought I’d add something. I’m the lead AME for a $12B engineering company and our Health & Safety Engineering team is extremely stringent on chemicals and safety. A full panel chem review was conducted on our print lab which runs a multitude of printers 24/7 producing thousands of parts a year; this included a 24 hour test of chemical/vapor emissions, a noise study, and an in depth analysis on every MSDS sheet on every Formlabs resin. With every printer in our lab running everything was given the full go ahead with no fume hoods or vapor extraction required. Just a normal room with A/C and no opening windows.

If that HSE team certified it to acceptable standards I’d imagine your personal Form 2’s or 3’s will be just fine.

EDIT: I should also add that the only PPE that was required based on this assessment are gloves for handling tanks/cartridges/IPA soaked parts and goggles when we make custom Formlabs resin blends in our mixing room (Last week we made a translucent red that glows in the dark with properties simulating ABS).

EDIT 2: For the sake of thoroughness I should also add that the only fume extraction requirement we have in the print labs is a fume hood over our IPA stations but that requirements exists company wide anywhere IPA is used. That is not tied to the Form Wash being unsafe just that IPA in general is a chemical that we required fume extraction for.

Thanks for the feedback.

The Form 3 arrived ahead of schedule. I set it up and fired-off the first print (13hr print time might not count as “firing” to some…). I left my office window and door closed.

The fumes were too much. This is with the default grey resin. I appreciate that the fumes are not toxic.

In my work environment, we have quite a few people sensitive to odors. So I will be building a fume hood for the printer.

So far the IPA odor hasn’t been an issue, other than when I filled the wash station.

My Form3 has to live in the office as well. The fumes from the draft resin are too much. I try to think of grey and clear smelling like a peppery pinot noir but still, it doesn’t feel healthy. I am starting down the road of building a fume case for the printer. @rybu If you have any pointers let me know, otherwise I will follow up here.

-run an ozone machine after prints , note;;; you canot be in the same room as the ozone machine (costs 30$-)
clears the air, smells like a frsh hotel room after.

**remove all resin tanks / figures when running the ozone machine. It is a less talked about air cleaners on the market of filtered air.,
because you can not be in room while it runs, yet it does not take longer than 5-15 minutes to neurtal a room/

Interesting. I used one of those ozone machines to de-stink a vintage typewriter case, just recently. Years ago I used one in a rented house that reeked of cat pee. Worked like a charm.

I wonder however if such a process removes any possible toxicity, or just neutralizes odor.

Hadn’t thought about the car! Good call on removing resin and prints. The room becomes completely uninhabitable and I can imagine it effecting chemistry.

I can assure you that Flexible and Elastic put out fumes that make being in the house very unpleasant. We mitigated it quite successfully by purchasing a window box fan (the kind that have the accordion-like barrier extensions), setting it to “Exhaust” and cracking one window a little on the opposite side of the the room. Basically sandwiched the Form 3 between the intake window and the fan-installed-window.