Heat will soften up epoxy and make easier to remove from the encased components. I once had to do this on a Toyota Supra ECU, and found that boiling it for about 10 minutes it had softened the stuff up just enough to be able to take it out of the casing, then using a flat blade screw driver I was able to remove chunks of the stuff until I exposed the board. Having a heat gun or a hot hair drier handy also helps in keeping the epoxy soft while your working on it.

Wow we’ve got some great replies here. Sorry for being AFK a bit. Yes I have two F1+'s with two-wire lasers, both lasers are flaring, both are surely FL lasers. I have reason to believe that at least one of the machines is the latest F1+ model. If I had to guess, I’d say FL moved some of the work to the new laser board and that this module might be a sort-of between design (between the F1 and F2?) I don’t really know.

The machines I have are one F1 that I bought on eBay a while ago and one my company gave me after having it serviced many times and eventually giving up on it. When I got the company machine home, I tried everything to get it to work but it’s laser was the problem and so only by swapping lasers with my good machine was I able to use it.

It’s the darker silver casing variety which I believe is the newer look.

Fantastic thread. I just can’t figure out why my laser looks different from everyone else. Am I seriously the only one here with a two-wire laser module?

Alright I had some time today so I busted apart the diode assembly. Here’s the pictures: 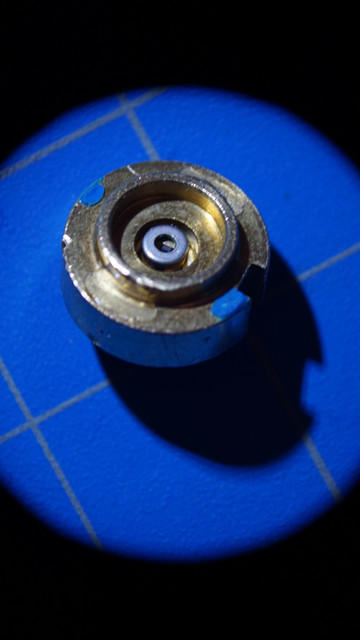 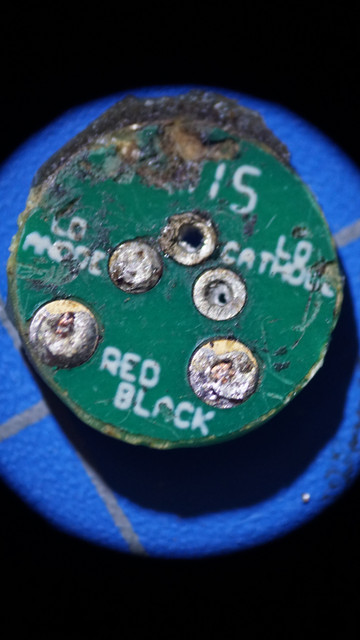 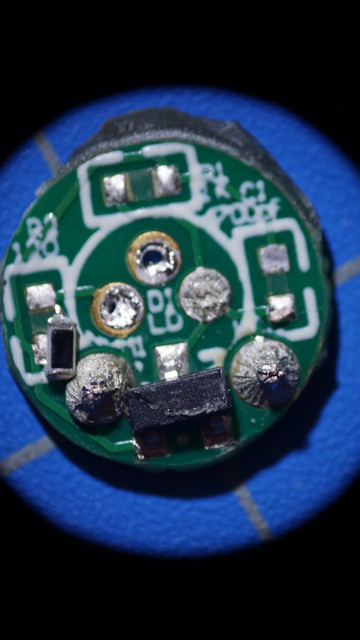 It’s entirely possible I lost a SMD component or two when removing the epoxy. R2 has clearly let go and C1 looks MIA, but R1 I can’t be sure of. Solder pads don’t look broken to me. Anyway this board looks stupid simple to me.

How do I figure out the diode model # / manufacture?

Scratch that, I found the other two SMD components in the epoxy lol. 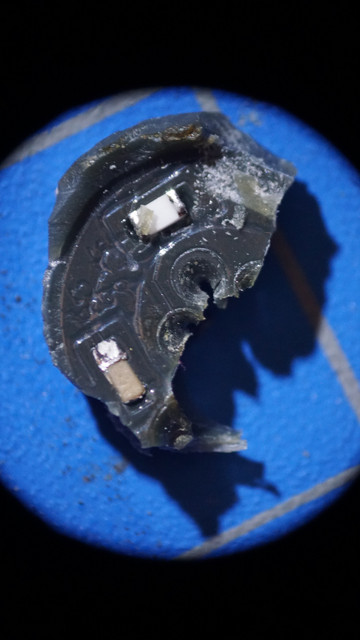 Can anybody else reading this topic check their lasers insider their F1+ printers and verify the number of wires coming out of their laser module?

I have personally seen the inside of 4 of these printers, two of my own, and 2 that I helped friends with. All had a 4 wire harness.

What about everybody else? Did FormLabs make changes to the F1/F1+ that resulted in a 2 wire laser?

Did you buy this printer new from Formlabs, or was this a 3rd party purchase? Is it possible the printer had been altered? 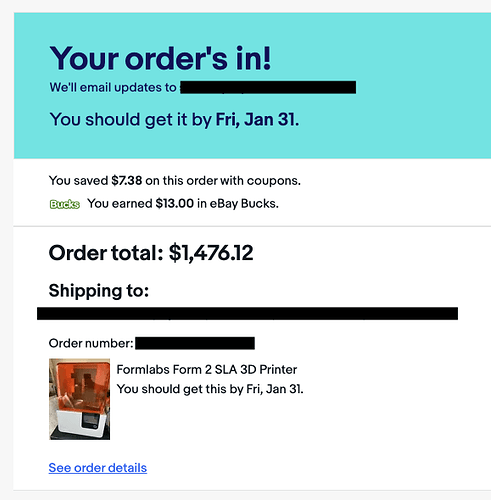 Sent this guy a low offer I wasn’t expecting to land. Huh, guess my 2x F1+'s are either toy machines or getting parted.

Last time I parted an F1+ I got more in parts than selling the machine whole so that’s what I’ll probably do.

Well, I guess we’ll never know the answer to my question, but Good luck with the Form 2 all the same.

To be honest, once my F1+ bites the dust, I probably won’t buy another Formlabs printer unless I came upon a really crazy deal. For the last 5-6 months I’ve only used my Photon, and haven’t even turned the F1 on.

IDK, I still have the lasers heading here. I’ll part my B machine and keep the A one to play with for now. Still interested in maybe getting it going or at least taking some readings off it but with a Form 2 finally coming idk how much I care. Even if I fixed the machine I cant imagine a scenario where I’d prefer the F1+ over the F2.

Alright I finally got around to working with at least one of the lasers, this one specifically: 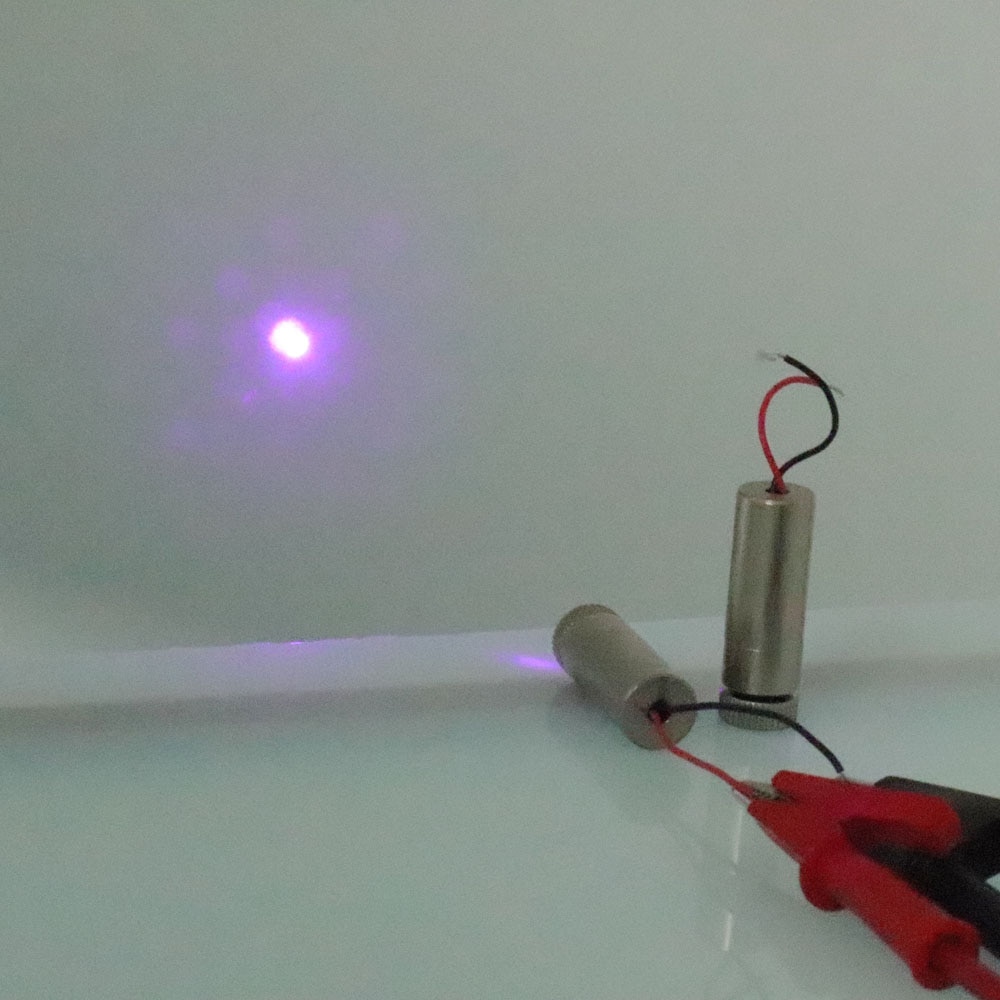 It’s the cheapest I got, the first to arrive and the least powerful in terms of mW. I seriously DO NOT recommend buying it. I’m just screwing around to see if this could actually work.

I have not tried to print with it yet, I have a lot going on work-wise.

Here’s the setup, it’s janky AF but it works. Crappy Chinese no-name laser module that’s too small for the 15mm hole, manual focus adjust, my dirty AF mirrors, and some duct-tape wrapped around the module to give it the diameter it needs to make it all work. 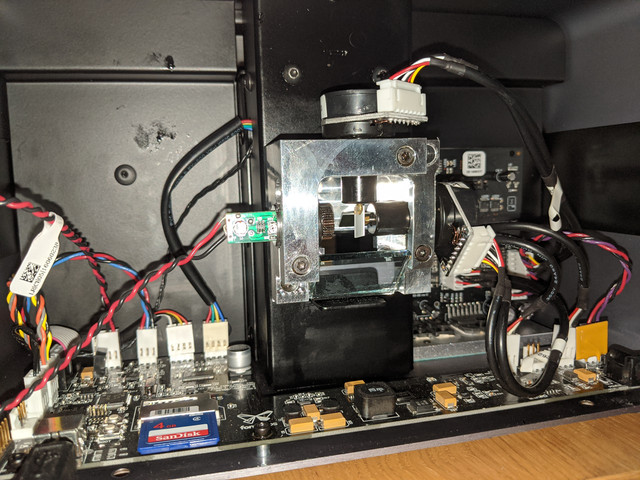 The laser did come with a cover for the back but I soldered on the wires from the FL1+ laser I destroyed without considering it and I’m too lazy ATM to redo the soldering. Order of ops matter, you’d think as a software / firmware engineer I’d know this by now 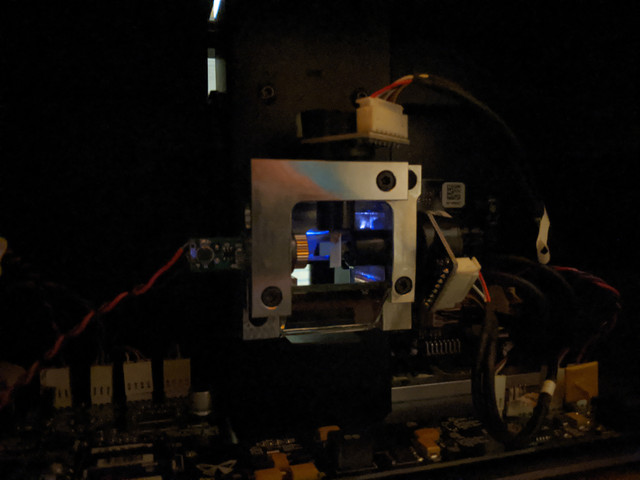 Extremely annoyingly there is like a tiny amount of current that is there and causes the laser to emit even when not printing. It does drop when the door is open (and not magnetically tricked into thinking it’s closed), however if the door is down even when the machine is not printing I still see the faint dot. 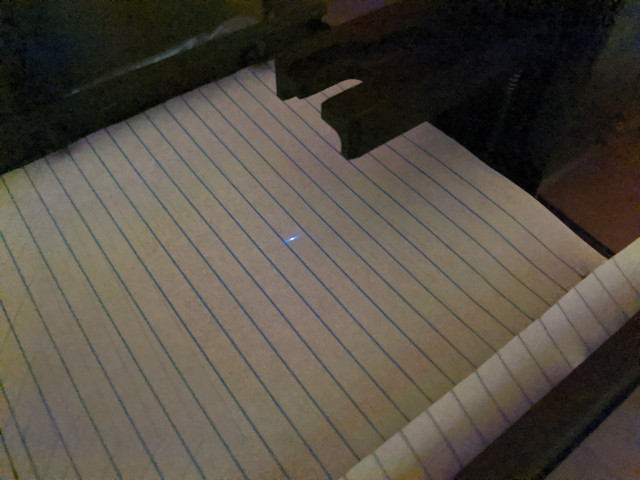 This picture looks terriable because I took it on a smartphone with a long exposure but IRL it actually looks pretty damn great. 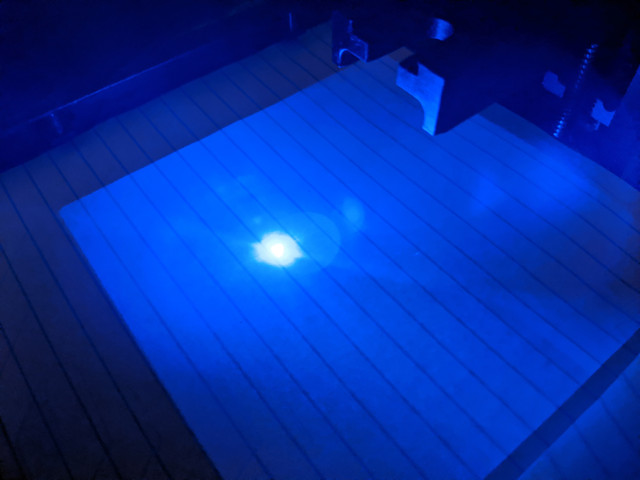 The laser has a current adjust pot, which once adjusted by eye seems to be at a similar place to the FL1+ laser, although who knows, I’m super guessing on that.

One of the other lasers I bought does not have a current adjust pot and is set pretty dim. I need to look into it further but so far I’m pretty disappointed in it and don’t think it will be viable.

Annoyingly all the stuff for the Sony T038 diode I paid good money for hasn’t arrived yet. I believe that one, once assembled will likely be the winner but I won’t be able to say until it arrives.

Since making this post I’ve ordered a few more lasers, this one in particular seemed promising but after two weeks those guys just got around to shipping it from China so who knows how many weeks until it shows up.

Given the marginal success I’m having with the $5 craptastic laser, idk I might just go for a print this weekend and see what happens. I’ll happily use it until it dies if it actually works.

Hey @DKirch the auto-lock seems to still be looming a threat here, mind taking a look?

I’ll add that my “factory reconditioned Form 1+” (a 1->1+ upgrade) has a 4-wire laser with no separate control board. I just disassembled and cleaned it today after a spill. 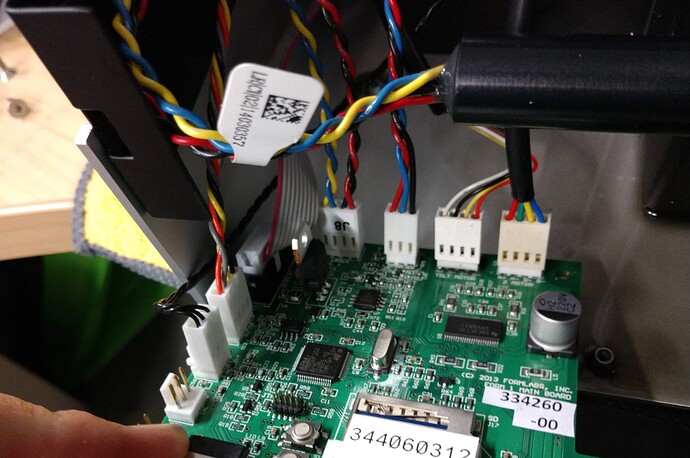 I’ve been printing like crazy on the thing… thought it was all solid state and it couldn’t wear out!

Maybe both of my machines have after market lasers. Having said that, one machine came from my company which had purchased it directly from FL, no funny business - although it had been serviced by FL at least once.

So I kind of said what the heck and just hit print on some Rooks and low and behold this happened: 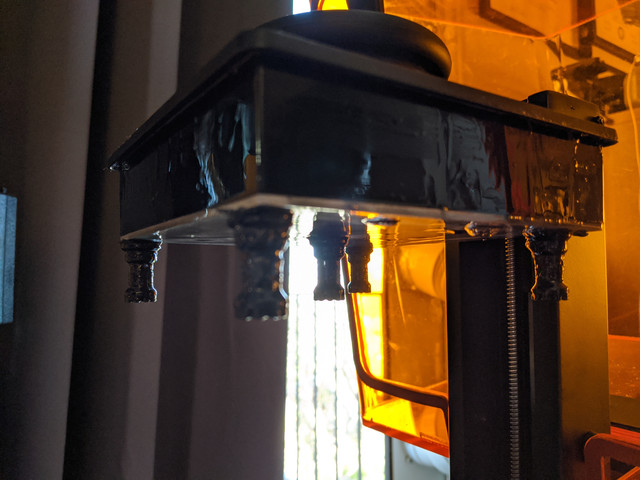 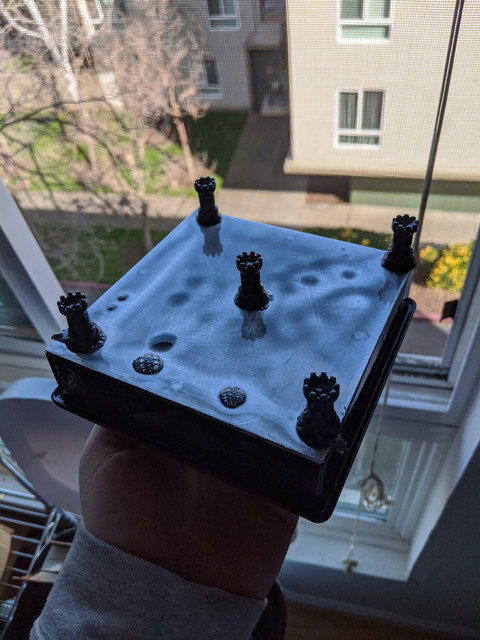 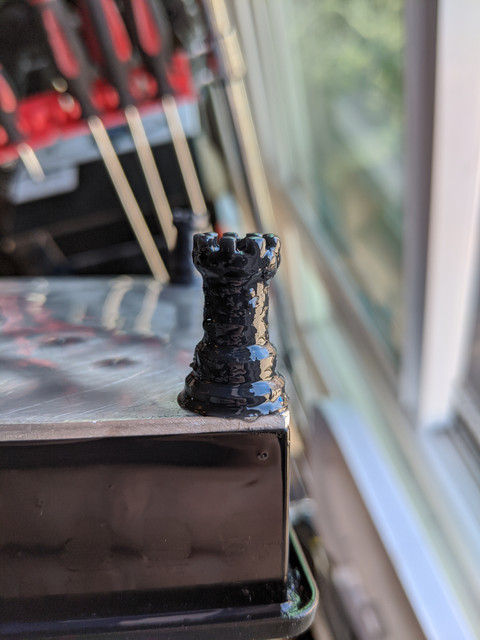 It might be a little “chunky” and if that’s the case it means I need to focus the laser better, but hot … that’s amazing. Cheap-o $5 laser is kickin’ eyyy.

Quickly post-processed, not even really trying just wanted to get the resin off the outside: 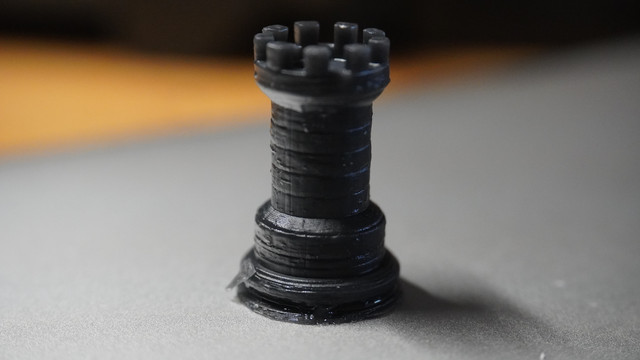 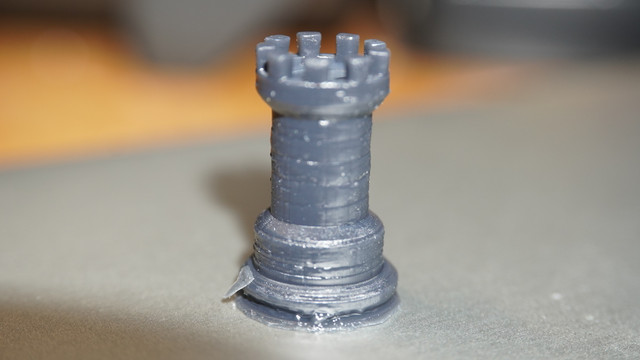 I think the beam dot is a little bit too large / out of focus, I can adjust that. As far as laser power goes, it feels good. I could maybe bump it a tad bit but that’ll be about as much current as this dinky diode can handle.

I’m curious if it lasts, but it can definitely print.

Well done. That probably makes you the first person who successfully substituted the laser inside a F1/+.
I’m surprised that it works because the rated power of your aliexpress laser is 1-10 mW and the max. optical power (what arrives at the resin in the vat) of the F1+ is 60 mW.

It’s been my personal experience that ratings of a given device are highly weighted on the marketing folks (depending on if it’s a spec that sells the device, what it’s sold for, what the target is) and very rarely is a system truly designed to work/fail/perform strictly at a given set of specs.

Quite possible that this thing just works, though the machine might be over-driving it

What’s keeping a similar thing from working, like the Peopoly one? https://peopoly.net/products/moai-laser-module-150mw-standard – is it just a cost thing? I suspect the laser was originally a not-terribly-cheap part of the original machine, thus replacement parts would be similarly not-terribly-cheap…

Thanks guys. I did finally get a Form 2 and have been loving it thus far. It’s honestly worth every penny as 100% of the 19 parts I’ve made on it have come out perfectly and that’s like weeks of frustration down to a few hours of brain dead printing. The F2 is a robotic masterpiece. My only real wish was that the damn vats not be consumable but oh well.

As for my two F1’s. I had a BUNCH of orders from China not ship because of the Coronavirus outbreak so I canceled or disputed most of them.

I did receive one additional laser rated for 150 mW that I think shows promise. So I’ll definitely want to try that.

The second point is that I had a subsequent print fail pretty badly on the F1+ and I think part of that was due to the way I mounted the laser. I can see parts that should be on the edge are off by a decent bit. I think a not-quite centered laser is the issue. I can print a bushing for the laser now that I have a working F2.

But in general I have made the decision to sell off the two Form 1+'s, likely on eBay for parts to recoup my $ and move on with the Form 2. It’s a great machine and I can’t see myself chancing expensive resin on the old machines when I have a more reliable workhorse available to me.

Let me know if you get anywhere with those new lasers. I did surgery on mine, and everything was going great until I cracked one of the little lenses in it (Aftermarket Form 1+ Laser Replacement).

This topic was automatically closed 41 days after the last reply. New replies are no longer allowed.