Disassembling and Reassembling of the Form 2 / re-calibrating Tank-Tray

The ones I used in the beginning of the video? Those are elements I took from a model I was working on. They are basically half spheres with an outside ring attached to the flat side and rather useless compared to Formlabs’ optics test file.
I suggest just using Formlabs’ test file instead.

I tried to attach the optics file but it’s too big in terms of file size. Ask Formlabs’ support for the optics test file, they’ll be happy to give it to you.

thanks for posting your video.

You’re welcome (for the video)
When you say +/- does that mean you have a combined difference of 0.5mm? If so try to get to a maximum of 0.25 all together. Or simply test your machine with a good part and see how well it comes out. Every machine is slightly different so what might be the right number for me might not be right for you. Once your machine builds a good base and connects all supports properly you’re in the right ballpark with a good working machine.

Do you have these print test files?

Antonio,
I have the file but it’s too large to upload here - but you can go to Formalbs’ Customer service and ask them to give you the optics test file (which is exactly what I ended up using), they’ll be happy to do so.
You can also simply make 4 small cubes in your modeling software and place each in one corner of the building platform. That’s besiclly all it is. Let the machine go and you’ll be able to measure each one and adjust the machine accordingly.

Chris,
thanks for uploading the file.
Interesting that your version is only 274KB mine somehow is 5 times larger (1.1MB)but show the same objects as I checked briefly (4 columns and the center object). Byt that’s the one.

I was a little confused when you said the file was too big…LOL, Just for your reference the file I uploaded was supplied to me on 2/1/18. When did you get your version?

Many thanks for submitting the file!

I found a much faster way to align the corners of the tray carrier with the build platform:
A. Remove the resin tank.
B. Set the printer to open mode.
C. Start a print, the build plate will come all the way down.
D. Unplug the printer.

Now that the plate is stopped at the bottom, get out your trusty spark plug gapping tool,
set the tool for a 7.5 mm gap. Adjust the gap at each corner by inserting the tool between the tray carrier and the bottom of the build plate, then adjust the screw at the same corner. You will need a #10 Torx Security driver, not a plain Torx and you should go around more than once because each adjustment can affect the other corners.

At this point I printed a test file which is shown below.

The result I’m getting is 4 good pyramids on the corners but the center pyramid doesn’t print, just leaves one layer stuck to the bottom of the resin tray. That’s the problem I will tackle tomorrow. Any suggestions? 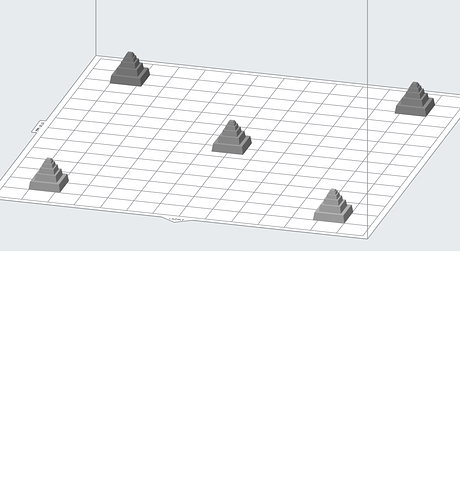 Increased the gap between the build plate and the tank carrier to 8.4 mm in several steps and it had no effect, corners still good, center still bad. I checked the optical window, the main mirror and the acrylic window on the tank, can’t see anything wrong. I’m beginning to think the PDMS layer on this tank has been damaged in the center.

I had even bigger problems to deal with, see here:

This is definitely going to void your warranty Experimental

The resin tank contacts on the carrier plate of my Form 2 had been gradually failing. It got so bad that just closing the lid on the printer would cause it to lose contact with the tank. Then I would have to pull out and re-insert the tank numerous times until contact was restored. Then one day it failed and no amount of pushing and pulling could fix the problem. So … Top of Carrier Plate [carrier_plate_top]

I have switched over to a new resin tank but haven’t tried printing any part with long rafts like the ones that failed.

Looks like a new tray did not fix the problem completely: 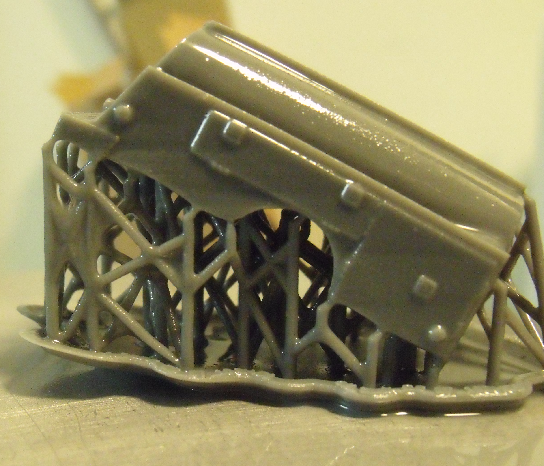 I have an accident with my printer and need to clean resin under the tank carrier, and beleive,YES, I took it out.

The good part is that I could clean all mirrors and the resin that was inside the printer eletronics. But now I have to calibrate it, and looking for how to do it, fortunatelly I could find your video.

Is there any update since it was recorded or any tip else?

Thank you so much and hope I can bring my printer back to life.

Hello Luis,
There is not really an update for “my” method, which is quite time consuming but will get your machine back running.

You might be able to level the carrier this way:

The build platform will go all the way to the tank surface and push it “into place” . Once the laser turns on pull the plug.
(I don’t own a From 2 anymore so I can’t test it myself)
You now should have a level carrier - Insert the allen wrench through the holes in the tank and set the screws.

This will go much faster but it also will “sacrifice” a tank - use and old one for this procedure once you have set the screws, plug in the machine again and press the main button it should reset itself.

I have not tested this but people out there have done similar procedures to level the carrier again quickly. I didn’t think of it back then so I came up with my somewhat complicated procedure.

Hope this works,
Stay healthy, all the best,
Jens

Here’s how I did mine (scroll a little down that first post): Form 2 Heater Cable Repair

But it entailed taking certain measurements before I removed the carrier. I was very careful, and after it was done the results were better than before. Of course if you mess up Formlabs won’t be able to help and will tell you the printer needs to be shipped back to them.

I linked to some posts about tank carrier calibration which may offer additional alternatives (the first of which are this thread and @Jens_Schnabel’s original videos - thanks for those!).

The latest suggestion of just allowing the build platform to lower and calibrating to that is interesting. Would love to hear how it worked out if you do it that way.

I’'ll modify a tank with the four drill holes to make these procedure.

The doubts I have here are: To calibrate my Form 2 printer, the tank carrier must be
in place with all screws tight until the end (tank carrier down) or they must be all
the way up (tank carrier will be as up as possible)?

Another doubt is: to calibrate the F2, the build plataform needs to touch the PDMS silicon
in the tank? If so, how much is this touch?

About to sacrifice a tank, I think I can close the four holes and put a new PDMS on it.

I will start this procedure tomorrow and I’ll do everything to bring my printer back to live, I am
so worried about it.

Thank you co much for all of your effort helping me here!
Warmest regards
Luis

I didn’t measure the screws turnings before I took it off. Yes, I messed up, and I can not, and I
won’t bring it back to Formlabs because of the unbelievable and so much expensives costs
envolved.

I will do these last suggestion: of just allowing the build platform to lower and calibrating. Just need
to know how to calibrate it. Just make the build plataform reaches the resin tank is enough or how
much they needs to be near, one from the other…

Thank you so much,
Luis