Below are some tips if you run into trouble or want to make adjustments.

Before you venture into model edits, be warned this was a frantically rushed design-build begun merely a week out from the conference (and that includes most of the component sourcing!). As a result, some my modeling best practices flew out the window. So if you’re courageous enough to fire this up in Solidworks, please accept my humble apologies for any pain that ensues. (I did start on a clean, redesign-from-scratch in Onshape but never got around to finishing it).

This post is reserved in case I get around one day to sharing some behind-the-scenes “making of” stories. It’s an entertaining little tale featuring hardware mishaps at the worst possible time, overnight-shipping shenanigans, and late-night hotel room assembly with improvisations that would make MacGyver proud.

In the meantime click the album below for some high-res glamour shots: 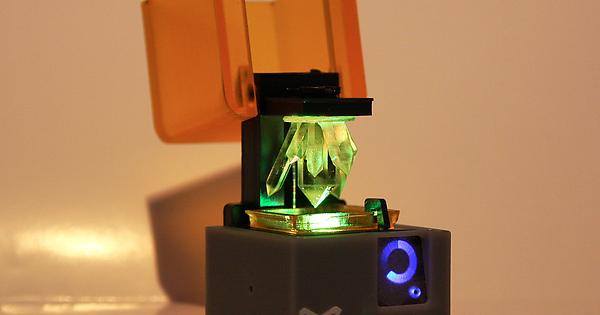 Or watch a video:

Finally a special thanks to @DavidRosenfeld for helping me out of a jam by printing several bases for me in Boston after I’d left for the conference.

Uh…wow. Not only is your work/print astonishing, but the amount of time and effort you put into documenting everything above…BRAVO!

It was great meeting you at FUSE! This documentation is absolutely incredible and my BabyForm 2 has a permanent spot on my desk

Thanks. Now i need to print one. Oh dear.
Seriously, looks brilliant.

I think everyone who saw them at FUSE was blown away, but seeing it all laid out here just took it to another level. The custom printed paperclip jig that serves multiple asm functions, the care and attention to detail on the parts, asm steps and documentation… it’s a really remarkable little homage to the Form 2. Thanks so much for sharing.

That is so amazingly cute! And well just amazing!

This is freakin’ adorable! Nerd out, everyone!!

Dude, thanks for the info on the Amber tint! I’ve been looking for this sort of thing since I couldn’t find any third party resins with that amber “look” anymore.

This is great! Thanks for sharing!

Were the files removed? The link takes me to a dropbox that doesn’t exist.

Thanks @scott_hill for letting me know. Unfortunately I no longer seem to be able to edit the post, but here’s a working link to the file:

Thank you so much!

Wow , I really want it on my table before I own a form 2… Form 2 still too expensive to me now.

@invabun, PM me. Maybe I can send you a late little Christmas present in the new year.

PM me. Maybe I can send you a late little Christmas present in the new year.

This is such a cool concept, full of detail and the print looks absolutely amazing! I’d love to get my hands on one too. @rkagerer are you making any more to sell?

@coffeejelli I’m not selling them (didn’t embark on this to make money) but am planning to make a few more in the new year. Since you asked so nice I’ll put you on the wait list. PM me your details.

I’m not sure when they’ll be available. I’ve been printing some parts opportunistically when I happen to have the appropriate resin in stock and installed in my printer for some other project.

I’m still playing with a couple design tweaks, albeit very sporadically (mostly in effort to improve surface quality on the top surface of the cover and the glass piece).

Have a great Christmas / New Year!

Oh wow, thank you so much!

This thread got lost; go here for the new location:

They’re back! If anyone wants a BabyForm2, come find me at today’s User Summit. The original thread was lost after the forum’s anti-spam monster got a little too hungry, but in honor of the occasion and with some encouragement from a helpful formling, I recreated the content here. Just my way of paying homage to a great little machine. [image] BabyForm2: 3D Print Your 3D Printer These little guys were a hit at the FUSE user conference. I didn’t bring enou…